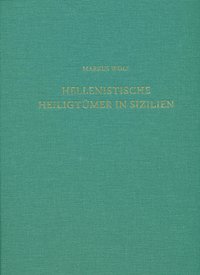 Compared to our knowledge of Hellenistic architecture in the eastern Mediterranean, Sicily is left trailing far behind, due not so much to a lack of archaeological evidence as to the still limited number of specific studies and detailed editions of its monuments. Markus Wolf has recently contributed to filling these gaps with two studies on the city of Soluntum, dedicated to domestic architecture (2003) and the agora (2013), now joined by this new work on the religious architecture of Hellenistic Sicily. The book examines five monumental complexes, to each of which a chapter is dedicated. The first four belong to the same chronological and political-cultural context, the Syracusan kingdom of Hiero II (265-215 BC). These are the Doric peripteral temple near the church of Santa Caterina in Taormina, examined together with the adjoining odeon of the imperial age; the Doric temple in antis of Serapis and Isis in the same city; the great Hieronian altar with the nearby triporticus in the Neapolis of Syracuse; and the Sanctuary of Demeter in Eloro, with its Doric prostyle temple and monumental stoa. The fifth building, the small podium temple in Agrigento known as the Oratorium of Phalaris, is instead related to a more recent period (between the second and first century BC), when the entire island had already been, for almost a century, Provincia Sicilia. Lastly, the sixth and final chapter aims to collocate the monuments studied within an extended comparative framework that includes the other sacred buildings of Hellenistic, Greek, and Punic Sicily, and those showing Roman-Italic influences. These are presented more briefly, and mostly on the basis of the existing literature. Despite the intention expressed in the introduction (11), the picture is not complete; among the various omissions we should mention at least the so-called Temple of Heracles in San Marco D'Alunzio and the presumed Iseion of Agrigento.

For each of the five complexes examined directly, Wolf provides a detailed description of the remains preserved in situ, accompanied by graphic documentation carried out personally and by photographs of high quality. The descriptions are followed by proposed reconstructions of the elevations of the individual buildings, in which we should applaud the author's efforts to exploit to the full the measurements and morphology of the surviving architectural elements - generally in meagre quantities - to produce his proposals. In fact, most of these elements have been lost, meaning that the data used for the reconstructions are extremely fragmentary. Wolf fills in the gaps on the basis of more general parameters, deduced from the constructive features, norms and proportions of the Doric order in the Hellenistic age. In principle, this is a legitimate procedure, which permits reliable hypotheses to be formulated; however, not all the reconstructions of plan and metric values of the elevation are supported by sufficient arguments, and thus at times seem to be nothing short of arbitrary. To give just one example, the height of the column in the peripteral temple of Taormina is reconstructed on the basis of a ratio of 1 : 6 between the lower diameter of the shaft and the height of the complete column (19). The decision to adopt this numerical value is justified solely on the basis of general considerations, while we would expect a more detailed discussion, considering that variations in this ratio have been documented also among buildings from the same period and the same region. Naturally, given the conditions of the buildings examined by Wolf, any reconstructive proposals are inevitably more or less hypothetical. The reconstructive drawings however do not allow to distinguishing parts presented on the basis of certain data or plausible hypotheses from the author's personal proposals. It would have been methodologically more correct, and more useful for the reader, if the differing degrees of reliability in each reconstruction had been indicated by means of appropriate graphics.

Among the objectives mentioned by Wolf in the introduction (11) is his intention to contribute to our knowledge of Hiero II's building programme and cultural policy. The results, however, do not fully live up to expectations, above all because some basic historical issues regarding Hiero's kingdom are substantially sidestepped by the author, despite having been discussed in recent literature. The book in fact fails to mention the problem - far from unanimously resolved - of the effective extension of the kingdom and the legal status of the cities subjected to the king. Moreover, I do not share the aprioristic and uncritical attitude with which Wolf, echoing Wilhelm von Sydow's study from way back in 1984, considers the dynast as the sole promoter and financier of all the sacred buildings within the kingdom, thus simplifying a certainly more complex reality. In fact, while monumentalization of the capital was linked to a royal programme with precise political and ideological motivations, the situation is different for the other sites considered (Taormina, Eloro, Megara and Morgantina). In these cases, we should remember the lack of specific literary or epigraphic evidence, meaning that we cannot take the hypothesis of a royal commission for granted; such a conclusion may be reached only after an in-depth analysis of the individual historical-archaeological contexts. Based on what we know today of the cities in question, I believe that we may argue this hypothesis in the case of Eloro and Megara, but that it is much less likely for Taormina and Morgantina.

Beyond the issue of royal euergetism, there is no doubt that the buildings in eastern Sicily examined by Wolf display significant affinities, so much so that they can all be included in the definition of "Hieronian architecture". It should however be clear that the adjective refers not to a common customer, but to a repertoire of constructive and decorative features originating in the kingdom's capital and then adopted in other cities: the question should thus be addressed first of all in terms of how models were transmitted and the work organized. This issue is barely touched on by the author, who hints in passing (32) to the existence, presuming it as certain, of "eine große Bauhütte als staatliche Institution", behind the dynastic building programmes in both Syracuse and other cities. Due to its historical importance, the question deserved to be dealt with in greater depth. On the other hand, an overall discussion of the constructive and stylistic features of Hieronian architecture, in relation to the composite picture of the island's previous and contemporary religious architecture, would have been a good way to conclude the study and would have given greater sense to the overview of buildings presented in the last chapter.

Ultimately, I believe that the overall historical framework, within which the buildings at the heart of this study are located, requires further reflection and analysis. Having said that, I do not wish to diminish the value of the field work and study that Wolf carried out directly on the monuments: such work, however lengthy and tiring, is essential for furthering our knowledge of ancient architecture, and I am thus convinced that this study will be used for a long time by scholars of Hellenistic Sicily.