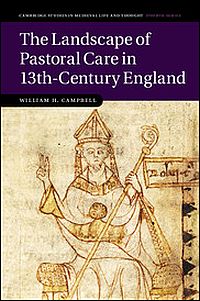 This volume offers a synthetic view of the English church during the 13th century, focused on the interaction of providers and recipients of the care of souls and drawing on a variety of primary sources and secondary studies. Important to this synthesis is the recognition of regional differences in lived experience, hence the "landscape" of the title. Attentive to chronology, Campbell stresses the 12th-century roots of 13th-century pastoral reform. Overall Campbell paints a picture of the church doing increasingly well over the century, if measured by criteria imbued with realism and gradualism.

The book is in three parts. The first two provide good overviews of basic material offering chronological generalizations attentive to difference. Part I, Pastors and People, surveys the providers of pastoral care in the 13th century, arguing that "pastoral care became a co-operative venture among the different orders of clergy" (94). Parish clergy, friars, monks and canons regular are described in terms of personnel, location, and education. Campbell stresses their overlapping spheres of influence. One belonged to a parish yet might also be served by the ministry of friars centered cities and traveling along major roads. Monasteries served their local communities as well as pilgrims.

Part II, The Processes of Pastoral Care, presents the ministries of preaching and catechesis, sacraments and liturgy, confession and penance, describing the people involved, the resources supporting it, and lay experience to the degree that it can be discerned. Campbell continues his portrait of shared endeavor across orders of clergy. Although there are no extant sermons from the English parish clergy of the 13th century, they must have been the source of the religious knowledge that friars assumed in their hearers. "The effectiveness of medieval preaching is hard to measure, but it is even harder to escape the conclusion that its cumulative effects were substantial" (116). Campbell focuses on the parish mass in his discussion of sacramental and liturgical pastoral care, offering an outline of the ordo, staying alert to variations. Recognition of the real presence of Christ in the elements was widespread, continuing earlier impulses. The mass was a corporate ritual, shaping communal identity. The sacrament of penance was an opportunity to see whether "[t]he vision of a pious lay society that developed among twelfth- and thirteenth-century clergy [that] was published to the laity in preaching and ritually enacted in sacrament and liturgy" was getting through to the laity (140). Once again, Campbell is relatively optimistic in his interpretation of the evidence.

Where and when one lived in the 13th century significantly shaped one's access to and experience of pastoral care. Part III, The Landscape of Pastoral Care, examines three dioceses in significant detail. Within each, there is an overview of the bishops and the statutes they promulgated, often including the pastoralia they mandated for their clergy. This is followed by a discussion of geography and its impact on pastoral care and an assessment of the vigor of parish spiritual life. Thus, Campbell provides an exemplary organizational schema in the hopes that further local studies may be done and used to "measure local exceptionalism" (175).

After a methodological introduction, part III begins with a comparison of the provinces of Canterbury and York. Canterbury was influenced by innovations emanating from Paris early; York subsequently adapted Canterbury's legislation for its own use. For each province, Campbell discusses its archbishops in chronological order, highlighting key facets of their pastoral legislative agenda when such material was produced.

He then turns to the Diocese of Lincoln, the largest in England, part of the province of Canterbury, and one with exceptionally good 13th-century records. He reviews the bishops chronologically, noting such eminent promoters of pastoral ministry as Hugh I and Robert Grosseteste. He then examines archdeaconries within the diocese, Lincoln and Stow near the cathedral, and Oxford, a prominent center of learning. Campbell highlights specific examples of pastoral opportunities such as cooperation between mendicants and seculars, parish churches on monastic grounds, and educational possibilities. This "extraordinary diocese" shows "what was possible" in pastoral care (219).

For the Diocese of Exeter, the material available is far sparser. Using the pastoralia of Bishop Quinel from the 1280s, Campbell seeks to assess pastoral care via the dissemination, comprehension, interpretation, and implementation of prescriptive texts, and concludes that if it failed, it wasn't for episcopal lack of trying. Due to poorer roads, rugged terrain, and larger distances between churches, pastoral care would have been somewhat less accessible in Cornwell than in Devon. In the city of Exeter itself, the cathedral provided liturgical elaboration, friars were more involved in pastoral care, and there were noteworthy educational opportunities for clergy.

The northern Diocese of Carlisle was relatively new in the 13th century, poor, and subject to wars along the Scottish border. At least one bishop drew on pastoral statutes that ultimately came from the southern province. Parishes here were large due to low population density. Unusually for England, the cathedral chapter was made up of Augustinian canons who did much pastoral work sede vacante. "The visible participation of canons regular in pastoral care and ecclesiastical administration presumably represents a great deal of further but unrecorded activity that enabled the diocese to operate more effectively than we might have guessed from the relative weakness of secular church structures there" (261).

Overall this volume succeeds in providing a good overview of pastoral ministry in 13th-century England and illuminating studies of specific locales. It reads well. Campbell tends to be succinct; I'd have welcomed more elaboration in his interpretive commentary. Throughout, but especially in part III, Campbell's analytical structure is carefully crafted, and a significant scholarly contribution in itself. Even here I would have liked to see additional structural signposts for the reader.