Hella Eckardt: Writing and Power in the Roman World 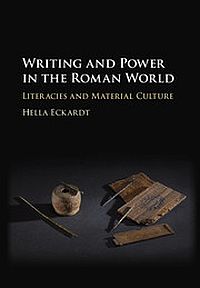 The title of this book is misleadingly general. Certainly it deals with "writing" in a "Roman" context; "power" it touches on in a rather more notional way (cf. 11-12); its "world", is considerably more limited than the Roman one. If the title were metadata, we should expect to see in it the words "inkwell", "social status" and "northwestern Roman empire". On this range of topics, the author, Hella Eckardt of the University of Reading, has produced a stimulating and rewarding study.

The first section of the book (chapters 1-3) is broadly introductory. Chapter 1 provides a prophylactic rehearsal of theoretical discussions about ancient literacy from the 1960s to the present, as well as a more pointed discussion of archaeological disputes about the manifestation of social identity in material culture. The second chapter offers brief descriptions of the various writing instruments used by Romans: styluses and wax tablets; pens, inkwells and papyri. The third chapter surveys some occupations of writers - scribes, secretaries and authors for example - and elaborates the "embodied" routines through which they engaged with their utensils.

With the second section of the book (chapters 4-7) Eckardt turns to inkwells. Some were doubtless workaday objects, homemade from materials like wood or bone. Others were more deluxe, crafted from ceramic, glass or metal in workshops, which stamped them with their hallmarks (chapter 4). Generally accepted typological conventions, defined with reference to the material and shape of the body and the style of the cover and aperture (68), introduces some order to the catalog of inkwells (chapter 5). The handles and rings affixed to some inkwells suggest that they were portable; a smaller or larger capacity may be taken to suggest that ink was used by one or shared by many (chapter 6). Provenanced inkwells have been found above all near Roman administrative sites: cities and military bases. The more specific "depositional context" confirms the connection of writing to governmental buildings and institutions (chapter 7).

The third section (chapters 8-11) will deservedly attract attention for its novel treatment of inkwells as elements in assemblages of grave goods. Examples are few and are associated with elites; so, as Eckardt notes in the conclusion (230) (chapter 12), the phenomenon can throw little light on the question of the general extent of literacy in Roman society. The inclusion of writing materials among grave goods may, however, be a marker of the aspirational prestige of literacy for social identity (as opposed to being evidence for actual competence with letters). The iconography of writing in sculpture and painting, mostly drawn from Pompeii and its vicinity, illustrates this point (chapter 8). The significance of writing materials is evaluated in relation to the social status (specifically the "life course") of the grave's occupant. Gender discriminations are taken up first. Unexpectedly the number of female graves containing inkwells is comparable to the number of male graves (174-175) (chapter 9). Educational aspirations do much to explain the inclusion of writing materials in the graves of children (chapter 10). Seldom are grave goods limited to writing utensils; more typically they include various materials with a variety of connotations. The association of inkwells with objects such as game tokens and accounting markers, medical tools and the paraphernalia of personal grooming, points to a few of the lodestars of identity (chapter 11).

Eckardt fails to provide any systematic discussion of the dataset that supports some of the arguments of the book (notably the account of grave goods in section 3): an unfortunate omission. Some clarifications can be derived from scattered remarks (most importantly at 114-115 and 135-136). Also Eckardt posted a pdf of the catalog online (cf. 69, 226; it has since moved to an archaeological archive hosted at the University of York, https://archaeologydataservice.ac.uk/archives/view/inkwells_2016/). The catalog includes 490 objects, of which 440 are actually inkwells (226). Of these, 131 are provenanced from a total of 125 graves (155, 182). It is essential to bear in mind, though the point is not emphasized in the book, that the catalog is restricted to metal inkwells - fancier, more expensive than ceramics.

The collection is skewed in other ways. The dataset is inevitably incomplete (e.g. 105, 230). Eckardt has seldom been able to examine collections and objects directly (59, 108) but has relied in the main on published accounts. Results are consequently shaped by national "excavation and publication levels ... research traditions, language skills and (the author's) personal contacts" (227). On a rare research trip to Cologne, Eckardt identified 21 unpublished inkwells in storage - doubling the number of inkwells known from the place (114). The limitations of previous research and publication, Eckardt suggests, accounts for the striking geographic bias of the collection. The bulk of the catalog derives from northwestern Europe; very few examples are listed from North Africa, Spain and Greece (230). There is no accounting for why Eckardt disregards the abundant evidence from Egypt and the Greek east.

The arguments of the third section on writing materials and grave goods cry out for some more general reflections about the supporting evidence. Death is not a democracy and cemeteries are not slums: those singled out for burial by that fact stand at a remove from the many-headed poor. In addition, metal inkwells are of their kind luxury items. And even so, finds of writing materials in cemeteries are rare (Eckardt at 173 notes that at Krefeld Gellep in Germany, out of 6,000 graves, 2 contained inkwells). Out of 125 inkwells provenanced to specific graves, Eckardt musters 26 male and 16 female graves (174) and 13 child burials (189): these cases are provocative to be sure, but are nevertheless social rarities.

The book is indisputably a pioneering effort to bring the materials and methods of archaeology to bear on the contentious topic of ancient literacy. Eckardt is critical of earlier work for its lack of engagement with material aspects of writing (e.g. 7); yet contrariwise makes little effort to integrate archaeology with the literary, epigraphical and above all papyrological evidence (cf. 259-60). The absence of reference to Egypt, and particularly to the efforts made by papyrologists over the past twenty years to situate the practice of writing in its archaeological context, is conspicuous (bibliography cited in e.g. the recent essay by Taco Terpstra, "The Materiality of Writing in Karanis: Excavating Everyday Writing in a Town in Roman Egypt", Aegyptus 94 (2014), 89-119). Despite such reservations, the book is an important contribution and will stimulate thought and discussion among students of ancient literacy.