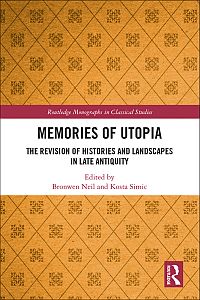 This collection of essays, conceived and edited by Bronwen Neil and Kosta Simic, focuses on the interplay of "memory" and "utopianism" in the culture and thought of late antique Christianity. The editors suggest that utopian beliefs dominated the relationship. "Memories were shaped by utopian ideals," as Neil says in the introduction (8). The book consists of fourteen essays, including an introduction and epilogue, arranged in four sections.

The first section ("Writing and Rewriting the History of Conflicts") is devoted to the role of memory in rationalizing and resolving religious conflicts. Bronwen Neil's programmatic introduction to the volume ("Curating the Past: The Retrieval of Historical Memories and Utopian Ideals") provides definitions of "memory" and "utopia" and argues for the value of the concepts for understanding the culture of late antiquity. Philip Bosman ("Julian's Cynics: Remembering for Future Purposes") describes how the "apostate" emperor Julian championed an idealized version of the philosophical Cynicism as a secular alternative to Christianity. Jonathan Conant ("Memories of Trauma and the Formation of an Early Christian Identity") revisits the Diocletianic persecutions, arguing that this "trauma" contributed to the subsequent emergence of an enduring Christian culture of "hypervigilance and aggression." Francis Dunn ("Augustine's Memory of the 411 Confrontation with Emeritus of Cherchell") finds in Augustine's tendentious account of his past disputes with a rival churchman an attempt to implement a "utopian resolution of the Donatist controversy."

In the second section ("Forging a New Utopia: Holy Bodies and Holy Places") Wendy Mayer ("Purity and the Rewriting of Memory: Revisiting Julian's Disgust for the Christian Worship of Corpses and its Consequences") discusses the emperor Julian's inflammatory characterization of Christianity as the worship of corpses, a strategy that was founded, she suggests, on a universal, evolutionarily conditioned repugnance from putrefaction. Naoki Kamimura ("Constructing the Sacred in Late Antiquity: Jerome as a Guide to Christian Identity") contributes an essay on Jerome's complex and shifting attitudes toward Christian pilgrimage to the holy land. Deprecating the physical journey, Jerome urged a spiritual and scriptural voyage. His reservations may also have owed something to his feuds with the clerics of Jerusalem. Chris de Wet ("Utopia, Body, and Pastness in John Chrysostom") treats the Christian distinction of body and soul. He argues that for Chrysostom the body is affiliated with the past; its ascetic chastisement and mortification is necessary for the realization of a pure and "utopian" corporeal existence. The project is analogous to the collective late antique cultural project of "disciplining" the legacy of Greco-Roman paganism.

The subtitle of the volume highlights the importance of "memory and landscape," and several of the contributions in the third section ("Rewriting Landscapes: Creating New Memories of the Past") take up this theme, sometimes defining it somewhat expansively. Bronwen Neil ("Memories of Peace and Violence in the Late-Antique West") reflects on the spatial principles of Greco-Roman mnemotechnics, elaborating their importance for the rhetorical strategies of Christian hagiography and for the imagination of the eschatological sites of heaven and hell. In the following essay ("Two Foreign Saints in Palestine: Responses to Religious Conflict in the Fifth to Seventh Centuries") Pauline Allen and Kosta Simic consider the promotion of two Palestinian saints as a response to demographic changes, political crises and religious controversies of the fifth and sixth centuries. Next, Simic contributes another essay ("Remembering the Damned: Byzantine Liturgical Hymns as Instruments of Religious Polemics"), showing how Byzantine liturgical hymns popularized elite controversies and cautioned of the threats of other religions. Ryan Strickler ("Paradise Regained? Utopias of Deliverance in Seventh-Century Apocalyptic Discourse") discovers dystopian pessimism and utopian hopes in apocalyptic literature of the seventh century. Idealized political orders of the past were mobilized in the service of idealizing present cultural orders. Apocalyptic narratives portray a decline into present social dystopia, while holding out the eutopian hope of deliverance. The last essay of the section deals literally with landscapes: Chris Bishop ("Ausonius, Fortunatus, and the Ruins of the Moselle") discusses competing visions of the Moselle valley in late antiquity as a prosperous locus amoenus or decaying cultural hellscape.

In the final section ("Memory and Materiality") Robin Jensen ("Spitting on Statues and Saving Hercules's Beard: The Conflict over Images (and Idols) in early Christianity") surveys the Christian response to ancient statues, discussing the evidence for vandalism and iconoclasm and considering the reasons, not all religious, for the reaction. Janet Wade ("Athena, Patroness of the Marketplace: From Athens to Constantinople") contributes a case study on the continuing presence of the image of goddess Athena on shipping weights in the Christian era. Though commonly explained as an example of the "secularization" of a pagan divinity, lingering religious devotion may also have played a part in the survival. Leonela Fundic ("Transformation of Mediterranean Ritual Spaces up to the Early Arab Conquests") considers the reuse of ritual spaces by Christians (and, very briefly, by Muslims). She sees in this phenomenon the competing desires of zealots to show the supremacy of their new religions and the conservative desire of political authorities to parade a continuity of function. The section concludes with an "Epilogue" to the book by Rajiv Bhola, who pleads particularly for the utility and complexity of using the idea of utopia to discuss attitudes in antiquity and the early Christian era.

One of the two announced themes of the book, "memory," is amply and diversely treated in all of the essays. If memory is to be distinguished from ideas such as "history" and "tradition" it is because of its instantiation in individuals and groups, as opposed to its constitution in the content of writings. It follows that memory is, unlike history, not monolithic. It may be that historical truth is one, or it is not the truth; but the truth of memory is many, depending on the traditions and predilections of the group or individual. So, contributors discuss "memories" associated with different social and regional groups, ranging from merchants to peasantry to poets to churchmen.

The second theme of the book, "utopianism" in late antiquity, is novel and should excite dispute and qualification. I am stimulated, but do not come away persuaded of the applicability of the idea to the circumstances and thought of early Christianity. The word "utopia" came into common use with Thomas More to describe the presentation of overtly fictional societies, imagined worlds that open up a present space for contemporary criticism and the possibility of targeted political action. It may be that some aspects of the utopianism are not utterly alien to premodern thought - More himself cites Plato's Republic as a precedent for his own essay - but the underpinnings of the idea seem to me fundamentally modern. The association of utopia with the future, for example, is intrinsic to many of the essays, and to the conception of the volume as a whole. Early utopias such as More's (never mind Plato's) were set in the present, but in an inaccessible or overtly imaginary place. The modern association of utopian society with the future is first attested in the 18th century, and reflects the assimilation of utopian ideals to the ideology of historical progress. The temporalization of utopia is fundamentally modern.

It is difficult to accept on the evidence presented that Late Antique visions of Christian society were imaginary or speculative, deployed to foster social criticism and precipitate change. For example, modern secularists may reflexively regard Augustine's "City of God" as a utopian essay. Surely for Augustine, however, god's world is actual, not suppositional: a perfect and eternal order that underpins the flawed temporal order of the city of man. Likewise, apocalyptic visions should not be understood as utopian, nor even as idealizing; they rather premise a "tearing of the veil," when the evanescent phenomenal world butts up against the latent, omnipresent truth.

I do not wish to be understood as deprecating the importance of the central issue examined in this book. Whatever readers may think about the nature of memory and utopia in late antiquity, I expect they will read this collection, as I have done, with interest and profit.