Colette Bowie: The Daughters of Henry II and Eleanor of Aquitaine, Turnhout: Brepols 2014 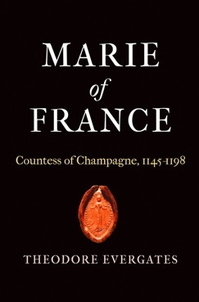 Marie of France, daughter of Louis VII of France and his first wife, Eleanor of Aquitaine, is known today as a patron of romance writers and, wrongly, as a participant in courts of love presided over by her mother. Theodore Evergates, applying his knowledge of the society and culture of northern France in the time of Marie and her husband, offers a corrective to such views. He presents her as a significant political figure in a period of change in northern France. Theodore Evergates is the author of several studies of feudal society in the twelfth- and thirteenth-century county of Champagne, including a biography of Henry I the Liberal, count of Champagne and husband of Marie of France. His depiction in this book of the lives of Marie, her husband, and their offspring illustrates well the material, mental, and spiritual worlds of aristocratic society in twelfth-century northern France.

Count Henry I and his family had patched together several feudal holdings into the county of Champagne and made Troyes its seat of government. Troyes with its fairs and location on major north-south routes provided revenues to support strong comital government and cultural patronage. The author makes clear throughout the book the importance of family ties, both maternal and paternal, in the success of the counts of Champagne. Louis VII's betrothal of fourteen-year-old Marie to Count Henry I of Champagne, 18 years her senior, in 1153 added new connections to the comital family. The marriage cemented an alliance that gave Louis an ally to the east offsetting Plantagenet threats to the French royal domain from the west. He strengthened his alliance with the Champenois house when he married Adele, sister of Henry, in 1160. Four years later, Louis gave Marie's younger sister, Alice, in marriage to Thibaut, count of Blois and brother of Count Henry.

Marie formed ties with her Plantagenet half-brothers whom she most likely first met at Paris in 1173, when they were there conspiring with Louis VII against their father, Henry II. Once she connected with them, she maintained contact with them. Marie's reaction to the death of her eldest half-brother, Henry the Young King, in 1183 suggests that she felt an attachment to him. Richard the Lionhearted, while a captive in Germany 1192-94, composed a troubadour song that he dedicated to Marie, "countess, my sister" (81).

Little evidence for Marie's life survives, yet the author makes good use of available material, chiefly documents produced by the comital chancery. This evidence shows her first activity at court in the months before Count Henry departed for the Holy Land in 1179, as she prepared to rule Champagne during his absence. After the count died abroad in 1181, Marie remained regent until her son Count Henry II came of age in1187. She enjoyed a brief retirement at a daughter-house of Fontevraud outside Meaux. Soon she returned to Troyes to became co-ruler of Champagne with her son before his departure on crusade in 1190, and the two shared power through "a substantial flow of documents between Acre and Champagne" (80) until Henry II's death in 1197. Marie continued to be regent for his successor, her second son Count Thibaut III, until shortly before her death in 1198.

Marie's official correspondence reveals her as "a securely confident countess" (30). In her biographer's view, she saw her responsibility as preserving her husband's principality for their sons, a task "which she did with vigor" (37). As elsewhere in the twelfth century, a number of Marie's officers at court were 'new' men from knightly families, many of whom had clerical relatives with some connection to the comital family. Several were men who had accompanied Count Henry I on the Second Crusade, although over time she promoted men from her own household.

Once Louis VII's son Philip II took power, the long Capetian-Champenois alliance ended. Philip (Augustus), Marie's half-brother, had little love for his Champenois relatives. Over the course of Marie's lifetime, northern French principalities, such as her husband's county, would lose their positions of near-equality with their neighbor Louis VII of France and fall under the sway of his assertive son. In 1198, her son Thibaut had to do homage to Philip to ensure an unchallenged succession to Champagne. Northern France's regional principalities were giving way to a centralizing Capetian monarchy, and the cultural dominance of Paris overwhelmed once thriving princely courts.

Theodore Evergates confronts the question of Marie's reputation as a patron of writers. She has been identified with several writers, most notably as the inspiration for Chrétien de Troyes' romance 'Lancelot', or 'Le Chevalier de la Charrette', and as a participant in the courts of love depicted in 'De Amore' by Andreas Capellanus. Chrétien begins 'Lancelot' by stating that he wrote it at her request, and he credits the romance's subject and meaning to her. Its story of a queen's adultery was a subject that Marie might have been expected to avoid in light of gossip circulating about her mother Eleanor's alleged adulteries. Certainly, Chrétien had ties to Troyes, possibly as a canon of the cathedral or chaplain of a chapter of canons at one of the count's palaces. Yet Marie's biographer concludes that neither she nor her husband can be considered his patrons.

Marie had a clearer connection with Andreas Capellanus, one of her chaplains and witness to a number of her acts, 1182-86 (Appendix 2). He was one of only two witnesses to her last recorded act, a gift to Troyes Cathedral for her soul, her late husband's soul, and the souls of their two sons, "an intensely private act" (62). In Andreas's 'De Amore', he depicts Marie as giving the judgment that true love could not exist within a marriage. This unconventional view aligns with her supposed suggestion of the topic of Chrétien de Troyes' 'Lancelot', a story of adulterous love.

In the 1190s Marie was involved in another literary project, a translation and gloss of the Latin Book of Genesis by Evrat, canon of the chapel of Saint-Étienne, part of the comital residential complex. Evrat's work was a popularization of the latest views of Genesis "as an erudite, private work of devotion" (87). In the same period, Marie founded a new chapter of secular canons at Provins, and the canons soon took up the copying of books; among the copies made by them are all of Chrétien de Troyes' romances.

Theodore Evergates takes note of Marie's documented friendships with other high-ranking ladies, Margaret, Marie's half-sister and wife of Henry the Young King of England, and Queen Adele, Louis VII's widow. During 1177-79 Margaret came to Troyes for an extended visit while her husband was on the tournament circuit in northern France. Later in the 1180s Margaret by then a widow again visited Marie, along with Queen Adele, Louis VII's widow. Margaret and Marie traveled together to Rouen in 1184 to visit the Young Henry's tomb in the cathedral. The two also traveled together to Paris to attend the funeral of Geoffrey of Brittany, another of Marie's Plantagenet half-brothers.

A fully rounded biography of a great medieval lady is hardly possible, given the limited sources. Nonetheless, Theodore Evergates, with his knowledge of the sources gained from years of studying the counts of Champagne, has given the fullest portrait of Marie of France to date. It is likely that his book will be stand for many years as the standard study of Marie of France.