Colette Bowie: The Daughters of Henry II and Eleanor of Aquitaine 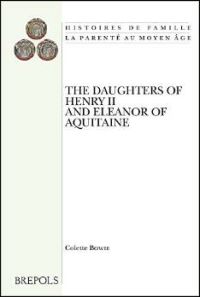 King Henry II of England and Eleanor, duchess of Aquitaine, had four sons and three daughters who lived to adulthood. Because the sons became military and political figures, they won some measure of fame, especially Richard Lionheart and 'Bad' King John. The daughters - Matilda, who married Henry the Lion, duke of Saxony; Eleanor, known as Leonor after her marriage to Alfonso VIII, king of Castile; and Joanna, first the bride of King William II of Sicily and after his death married to Raymond VI, count of Toulouse - are little known.

A dearth of documentation constrains the construction of rounded narratives of the royal daughters' lives. Contemporary chroniclers rarely recorded their birth dates, only taking note of them when they became candidates for marriage, and little record of their lives as married women survives. The pipe rolls, English exchequer's records of sheriffs' accounts, occasionally record payments to servants or purchases that reveal a little about their childhood. No letters exchanged by the daughters and their parents survive from the years after they left England for their husbands' courts. Because of the meager material available, writing informative narrative biographies of these three royal daughters is unlikely.

Best documented of the daughters is Leonor, queen of Castile, for as Bowie notes, medieval Spanish queens had "a level of authority and degree of political involvement" greater than queens in the rest of western Christendom, as shown by her prominence in Spanish chronicles. The major portion of evidence for Matilda's life as duchess of Saxony survives from years that she and Henry the Lion spent in exile at the English royal court. Least known is Joanna, Henry and Eleanor's youngest daughter, who played an insignificant role as queen of Sicily. Joanna did not fare well in her second marriage, and she fled the lands of Raymond of Toulouse shortly before her death to seek refuge with her mother and her brother King John.

In tackling her subject, Colette Bowie does not undertake a traditional biography, but instead compares and contrasts the three women's experiences, selecting certain aspects of their lives that can be documented. She writes that her study is "the first of its kind to consider these women in an intergenerational dynastic context" (13). One of her main points is to contest earlier historians' views that royal daughters had little contact with their birth families once their marriages to foreign princes separated them. She shows that Henry and Eleanor's daughters had formed strong emotional ties with their parents and siblings, and that they felt "a strong affinity with their natal family" (181).

To prove this point, Colette Bowie surveys scholarship on medieval children and historians' changing attitudes on the emotional lives of medieval people and the affective ties in medieval families. She summarizes recent studies that reject mid-twentieth-century views that medieval parents were distant and unfeeling toward their offspring. She finds that early childhood experiences of Henry and Eleanor's children cemented emotional ties that were "both powerful and long-lasting" (42). To support her view, she argues that Eleanor, despite her constant travel, took her daughters with her as often as possible. She shares other historians' view that Eleanor and Henry's daughters were well educated and were literate.

As further proof of lasting ties, Colette Bowie surveys the daughters' religious patronage, especially their support for the cult of St. Thomas Becket. She writes that Henry II "managed to appropriate Becket's cult for his own political ends" (170-71), transforming the martyred archbishop into the protector of the Angevin realm. She finds the daughters encouraging the veneration of Becket in Sicily, Saxony, and Castile. The author supports her view of the daughters' influence over gifts to religious institutions by arguing that joint donations by husbands and wives "are all too easily and all too often attributed to the husband alone, often concealing the possible - and sometimes likely - instigation of the wife" (19).

Colette Bowie concludes her book with an examination of the influence of the daughters' ties to their mother Eleanor of Aquitaine on their choices of burial place. As evidence of the daughters' shared feelings of family consciousness, she tracks their gifts to Fontevraud Abbey, a house much favored by Eleanor in her last years and her own burial place. Indeed, the dying Joanna, in flight from her husband's lands, requested to be allowed to take vows as a nun of Fontevraud and to be buried in the nuns' cemetery. Along with a discussion of Eleanor's goal of making Fontevraud an Angevin royal mausoleum, she turns to the abbey of Las Huelgas, mausoleum of Castilian royalty. Although Fontevraud is often considered the model for Las Huelgas, Bowie maintains that on the contrary it was Leonor's efforts in founding the Castilian royal mausoleum that inspired her mother to house the Angevins' official mausoleum at Fontevraud.

"The Daughters of Henry II and Eleanor of Aquitaine" makes a contribution to popular fields for investigation by medievalists today: childhood, emotions, families, marriage, and queenship. Because original sources are so scarce, the book is necessarily more a synthesis of recent scholarly writings than a work of archival research. The author's mastery of current trends in historical thinking is formidable, as shown by her lengthy and sometimes slightly tedious surveys of previous scholarship. This is a book intended for her fellow specialists, not for readers with a casual interest in the family life of Henry II and Eleanor.