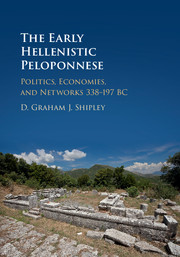 Graham Shipley's important book covers the period of Macedonian (varying) control over (parts of) the Peloponnese between the battle of Chaironeia in 338 and 197 BC - when the Romans took over. By setting the beginning of his research at 338 BC, Shipley essentially points to the limits of periodization and acknowledges that Chaironeia was more important to the Peloponnesians than Alexander's death in 323 BC - the conventional start of the Hellenistic period.

The book belongs to the growing domain, dear to many of us, of studies of the Greek world in the Hellenistic period, covering multiple aspects of Peloponnesian history and amply demonstrating that the notion of decline (either political or economic) is not applicable to the Peloponnese.

The book is divided into five chapters, their multiple thematic subdivisions being conveniently listed in the table of contents. The author very helpfully tabulates evidence (7 tables) regarding the "tyrannies" (sic) in the Peloponnese, the size of the poleis' territories, archaeological survey projects, coinage production and Peloponnesian historians.

Shipley builds upon his previous studies on Peloponnesian landscapes and economies, employing with due caution the entire spectrum of the evidence available at present: literary, epigraphic, numismatic and field survey data. Presentation and interpretation(s) of the evidence are lucid, concise and dense - sometimes depending on the readers' knowledge of his previous work.

Politics and warfare take up nearly half of the book (Chs. II-III) providing the basis for an exploration of "economies and networks" (Chs. IV-V). The use of plurals in the book's title is a clear signal to readers that the author is arguing for variations: indeed variations in time as well as in space form a key theme of the book as are continuities between the 4th century BC (especially after 338 BC) and 197 BC - "the long third century" as he aptly calls it.

Chapter I deals with the sources and the geography of Peloponnesian regions, crucial for the analysis in the following chapters. Chapter II starts with a brief narrative of Peloponnesian political history in the 4th century, down to the battle of Chaironeia. For the period after 338 BC Shipley identifies "two eternal problems" for any aspiring hēgemōn: how to achieve and maintain stability and how to restrain Sparta - the latter being a concern of both the Macedonians and, perhaps more so, of Sparta's Peloponnesian rivals. As to the methods of Macedonian rulers: the author finds strictness more often than clemency, a tendency to balance the power of one state against another, "delegation of power from a distance", creation of a Hellenic Alliance by Antigonos Doson and finally close "protection" by Philip V (72, 86-9, 245-50).

As regards continuity - a subject further analysed in Chapter III - two features stand out: Spartan resilience and the vitality of the poleis' citizen bodies, especially of the ruling elites, regrettably often expressed as competition, division, factionalism and at times even armed conflict. This was a legacy of the past but also a fundamental feature of the period under examination. For the conflicting parties the issue was no longer democracy or oligarchy but rather which policy should be adopted towards which Macedonian ruler.

In Chapter III Shipley convincingly argues that factionalism within the elites and the citizen bodies of the poleis goes a long way towards explaining the installation of "tyrannies", sometimes accompanied with garrisons. Shipley's chronological survey of the scanty evidence identifies "tyrannies" in up to 18 poleis, most of which were installed during the rule of Antigonos II Gonatas. The association seems clear enough but Shipley, having examined each case, rightly emphasizes that Macedonian support of "governors" or "sole rulers" varied in degree and content (120), that Gonatas' use of this method was opportunistic rather than the product of ideology and, equally important, that these men must have had the support of at least part of the population.

Apart from his reluctance to use the label "tyranny" employed by hostile sources (Polybius above all), Shipley's most interesting view is his parallelism of these sole rulers with the Roman dictator or the Greek aisymnētēs (59, 108, 115, 121-2, 124). We might take the author's view further and suggest that, given the posthumous honours awarded to Lydiadas of Megalopolis, his position could very well be akin to that of the aisymnētēs.

Chapter IV examines the varying poleis' economies on the basis of multiple sources: rural survey data, inscriptions, architectural remains, pottery, coinage. The picture that emerges is one of regional and even intra-regional variation. Alongside cautious readings of the sources, the reader is warned about what sources, at least in their present state, cannot tell us. Overall, the author rejects the notion of either economic or demographic decline, distinguishing between the early and late Hellenistic periods.

Shipley describes vividly the impact of political massacres, pitched battles and sieges on both the urban landscape and the countryside; it appears that the north-eastern Peloponnese suffered the most. He adopts an overall non-pessimistic view of the impact of warfare in the long run, arguing that the effects often "were probably localized or short-term or both" (182), perhaps a debatable but not unfounded view.

Rural survey data show an increase in the number of rural sites in certain regions at certain times but according to the author they cannot be employed "to demonstrate the health or sickness of the 'economy'" (199). Furthermore, warfare alone cannot explain landscape changes which vary both in region and in time. Thus, Shipley offers other possible explanations including trade and competition among members of the elite.

Turning to inscriptions, the author demonstrates that the output of the poleis is varied both in space and in time but in any case it indicates that citizen bodies were pretty active. He draws the same plausible conclusion on the basis of construction activities, such as theatres, cult sites and, above all, fortifications - all these presuppose decision-making and resources.

As to pottery, Shipley emphasizes that the material needs to be studied further but he does show "material-cultural links" between regions of the Peloponnese as well as with the wider Mediterranean world; the latter is particularly common in the coastal towns of Messenia and Lakonia.

Silver issues dominate the picture of coinage production but the author observes increased use of bronze coins. Major poleis of the north-eastern Peloponnese mint regularly, which as Shipley argues may be explained "by proximity to trade centres and routes" (236).

In the final chapter the author explores the causes of continuity and "perhaps modest improvement" in the early Hellenistic Peloponnese (244). The Macedonians did not exploit financially the Peloponnese, and tight control was difficult because of the distances to and inside the Peloponnese and the inaccessibility of certain regions. Having shown the varying character of the Peloponnesian regions as to their geographical, political and cultural unity - or the lack of it -, Shipley focuses his attention on the "routes and connectivity", or how movements of people and resources, especially by land, shaped the relations and identities of the poleis (271-82). "Connectivity" is amplified by his typology of routes and movements: to sanctuaries, within the countryside of a polis, between settlements, from settlements to towns, between towns and between regions. Almost all these pre-suppose collective action by poleis.

To sum up: the book is an invaluable, intriguingly nuanced study of the Peloponnese from the late 4th to the end of the 3rd century BC and the intelligent questioning posed by the author will help elicit further research. Its methodology and use of the sources should be a guide to the work of any historian of antiquity.