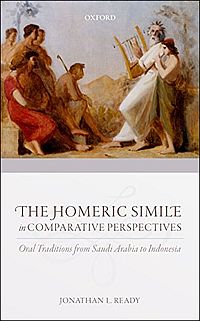 The new work by Jonathan L. Ready entitled The Homeric Simile in Comparative Perspectives: Oral Traditions from Saudi Arabia to Indonesia is not the first monograph that the author dedicated entirely to the study of similes. His first monograph, Character, Narrator, and Simile in the Iliad, published in 2011, was devoted primarily to the study of similes in the Iliad. In his new work, Jonathan L. Ready widens his field of research to include not only the ancient Greek epics, but also modern Kyrgyz, Rajasthani, Indonesian, Balkan, and Bedouin oral poetries. Consequently, the author analyses the Homeric simile in a broad comparative perspective by considering various other oral traditions in translation.

A reader will find two aspects of Ready's research most relevant. First is the introductory section (chapter 2), in which Jonathan L. Ready reviews the past and present work on various oral traditions, and proposes his own theory for understanding the difference between "tradition" and "innovation" in oral poetry. His literature review of the existing scholarship on the topic is excellent and perhaps the strongest and most generally applicable part of the publication. Bringing together all relevant research on oral literature, this review is one of the best and most thorough theoretical analyses since Ruth Finnegan's renowned Oral Traditions and the Verbal Arts.

Equally interesting is the author's own take on the difference between innovation and tradition. This is especially relevant for those interested in ancient Greek poetry, for which scholars have been arguing over the issue ever since Milman Parry's famous claim that both Homeric epics were traditional in origin. Jonathan L. Ready demonstrates that in oral composition, performers consciously utilise poetic elements on three levels: personal or idiolectal, regional or dialectal, and trans-regional or pan-traditional. These levels are, according to the author, used fluidly, and essentially form a "spectrum of distribution" on the grounds of which poets freely jump between various levels of traditionality. In order to demonstrate their skills and please the audience, they regularly and consciously use traditional poetic elements but also add their own innovations. Especially relevant is the author's argument that performers, even when using shared material, do not merely reproduce the tradition but rather use it in order to show their own, that is, individual competence.

According to Jonathan L. Ready, similes are an important space where poets can demonstrate their ability to vary between all three levels of traditionality, and Chapter 3 serves to prove this for the aforementioned modern oral traditions.

If the first part of the monograph contributes to oral theory in general, its second part is devoted entirely to Homeric studies. Here the author applies his own understanding of oral tradition to ancient Greek epic, focusing specifically on similes which Homerists traditionally understood as proof for poetic innovation. Analysing same, similar, and different similes, Jonathan L. Ready argues that the ancient poets used them on the "spectrum of distribution", several similes being completely traditional and some novel and innovative. His in-depth analysis of tenors (i.e. what is compared to something) and vehicles (i.e. with what it is compared to) aims to show that similarity between different vehicles reflects traditional elements of oral composition, even if this similarity is loose in our literate, modern sense. Therefore, the author argues against previous scholarship which attributes individual variation and innovation to Homeric similes, but with an important contribution. What Ready claims is that Homeric similes fall on the spectrum of distribution between shared and idiolectal, some (and in fact most of them) are shared and some are novel. However, building on his own understanding of idiolectal and pan-traditional, the author argues that precisely this variation between different levels of traditionality demonstrates the poet's individual competence in composition.

Jonathan L. Ready's work is an interesting and important contribution to oral theory and the study of Homeric similes. While some parts of the monograph are extremely technical (e.g. comprised of long lists of similes), its conclusions are indeed relevant for those interested in oral literature and/or Homeric epic - and perhaps less so to those interested in Kyrgyz, Rajasthani, Indonesian, Balkan, or Bedouin oral poetries. A question which the author does not tackle and still remains answering, however, is how the proposed theory of the Homeric similes can help us better understand the meaning of both poems. Since Jonathan L. Ready's monograph is focused primarily on technical analysis and less on literary interpretation, it still remains to be seen how his theory can help us become better readers and interpreters of the Homeric epics.