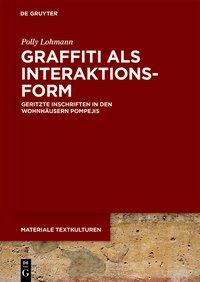 Graffiti have long been seen as the scribblings of slaves and schoolboys. Considered simplistic and not very challenging, they were not deemed worthy of scholarly attention. Much has changed nowadays: scholars have come to recognize that graffiti constituted a much more widely used form of expression, and an increasing number of people have started to pay attention to different aspects of the texts, leading to a 'renaissance' of graffiti studies. Polly Lohmann's study generously contributes to this trend: it analyses graffiti writing as an everyday form of interaction, by discussing Pompeian wall inscriptions in their socio-cultural context.

The first two chapters address a number of background issues. Chapter one (3-37) demarcates graffiti as an epigraphic category: Lohmann does not find the traditional definition of graffiti entirely satisfactory, and proposes to broaden it, by viewing graffiti as 'secondary' writings on surfaces which were not originally meant for this purpose. Another characterization which she does not find adequate is that of graffiti as 'private', 'non-official' and 'informal' texts: Pompeian graffiti encompass a broad spectrum of texts, which cannot easily be classified in such terms. Lohmann concludes the chapter by comparing ancient to modern graffiti, noting that the two constitute very different practices. Chapter two (39-61) goes into a number of methodological aspects. In her short overview of the current state of research, Lohmann notes that initially scholars either paid no attention to graffiti, or selectively, focusing on metrical and erotic texts. Only since 2001 have scholars been interested in the contextualization of the entire corpus. Lohmann includes a short overview of archeological studies. She then goes on to sketching a number of geographical, temporal and source limits: the study discusses wall inscriptions from Pompeii edited in CIL IV, focusing in particular on six houses. She concludes the chapter by outlining her research questions and assumptions, noting that the approach is historical / archeological, rather than philological.

The next three chapters focus on graffiti writing as a historical practice from a general point of view. Chapter three (63-101) outlines three different contexts relevant to graffiti writing. First, Lohmann outlines the spatial context of writing, by discussing the six different houses on which the study focuses. All of these houses belong to types 'three' and 'four', that is, they are large or very large houses. Lohmann pays specific attention to the shape and history of the six houses under analysis, also looking into their inhabitants and visitors. Next, Lohmann discusses questions of literacy and writing habits: she draws attention to the omnipresence of writing, noting that the city became a real Schriftraum starting from the end of the first century BC. Lohmann concludes the chapter by briefly going into conceptions of literacy, arguing that literacy is best viewed as a scalar concept, and that graffiti are to be situated in between analphabetism and full literacy. The short fourth chapter (103-115) addresses the central theme of this study, namely the 'interactive' character of graffiti. Lohmann proposes to view graffiti not as passive objects, but as 'actors', in that they can convey the intention of their producers, or evoke reactions from other people. She proposes to understand 'interaction' in a broad sense, for example when one graffito reacts to its context of writing or to another graffito. Lohmann concludes the chapter by outlining a number of communicative situations in which graffiti are involved. Chapter five (117-143) focuses on the CIL as a corpus, specifically CIL IV (with supplements), which is most directly relevant for Pompeii. Although she recognizes the centrality of the CIL as a corpus, Lohmann advises caution, since the CIL cannot simply be used without being well aware of the methods of the editors (in terms of structure, imaging, archeological documentation, etc.). Lohmann closes the chapter by giving an insightful overview of the different types of graffiti, and the places where they can be found.

Chapter six (145-241) is the longest and most central chapter of the book. In it, Lohmann provides an in-depth study of the graffiti in six Pompeian houses, two 'large' (Type 3) and four 'very large' ones (Type 4). For each of the houses, Lohmann gives an introduction concerning the architecture and discusses the distribution of graffiti, how they are integrated in the wall decoration, as well as their formal and content characteristics. Two of the houses, the Casa dei Ceii (I 6,15) and the Casa degli Amorini Dorati (VI 16,7.38) have a relatively small number of graffiti, a fact which Lohmann tries to explain by placing these houses in their socio-historical context. Throughout the chapter, there are plenty of schematic plans, photographs, and color illustrations of wall surfaces with graffiti in relation to decorations and architectural features.

The next two chapters again take a wider approach, and provide additional information concerning the way the texts were produced, and the people behind them, concentrating on the entire corpus of Pompeian inscriptions. Chapter 7 (243-327) deals with two aspects of the Pompeian graffiti habit: first, Lohmann discusses the 'practical' aspects of writing, such as the writing material and the writing style. Second, she goes further into the 'interactive' character of the texts by discussing how they were perceived by their makers or second / third people involved. Lohmann also goes into the aesthetics of the texts, by discussing the place where they were written as well as the formal characteristics of the texts and their handwriting: she shows that graffiti could comment on / react to decoration in the house, or constitute a form of decoration on their own. Chapter 8 (329-358) analyses who was involved in graffiti writing (writers, addressees, and third parties), by analyzing the names that can be found in the graffiti for criteria such as ethnicity, gender, etymology, social status, origin, occupation, etc., also including information about epithets and attributes. She concludes that many (though not all) of the people that are involved in graffiti writing come from the lower strata.

Chapter 9 (359-366) concludes the book. Lohmann repeats a number of important points that have been made, stressing, among others, that modern and ancient graffiti writing are very different practices, that materiality as a methodological starting point allows for a much more comprehensive approach than what has been done so far, that people from a different age, gender, status, education, etc. were engaged in graffiti writing, and that graffiti often came into existence in interaction and dialogue.

These are interesting and important points. I would therefore recommend Lohmann's study to anyone interested in getting a 'behind the scenes' view of graffiti writing. The book well illustrates the potential of two methodological turns that have been made in recent years: the 'material' and 'spatial' turns, advocating, respectively, close inspection of material aspects of writing and the spatial context of writing. What remains to be done is to integrate such an archeological-historical approach with a linguistic-philological one. Lohmann explicitly separates the two based on the view that graffiti should be analyzed in their own right and not serve as source texts for individual themes. At the same time, she seems to be well aware of the potential of linguistic phenomena such as deixis, multilingualism, linguistic variation, orality, etc. to reveal even more about the context of writing.