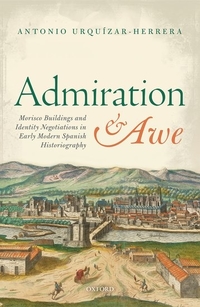 Antonio Urquízar-Herrera's Admiration and Awe. Morisco Buildings and Identity Negotiations in Early Modern Spanish Historiography is informatively very rich and from a research point of view an innovative book. Its reading and comprehension require reader's full concentration and demands previous knowledge regarding Spain's multiplex and multicultural historical situation. Urquízar-Herrera's publication can be considered as the first systematic analysis of the cultural and religious appropriation of Islamic urbanism and architecture in the Iberian Peninsula during the Early Modern Period by Spanish historians.

Admiration and Awe is an extensively researched book that provides an in-depth analysis of the reception of Islamic buildings by the local scholars during the 16th and 17th century, and the crucial role of those constructions in the negotiations of the Hispanic identity during that time's historiography. In simpler words, one of the main questions is whether al-Andalus was part of the history of Spain. And, subsequently, "Were Islamic monuments understood as a part of the history of Spain?" (7). In Urquízar-Herrera's opinion, the Islamic architectural legacy is a particularly important example of the complex relationship between historiography and the construction of identity thanks to the physical evidence provided by the buildings. Previous analyses of the Islamic monuments in the Early Modern Period have focused on the connections to the history of architecture and antiquarian culture, but here the aim of the author is to trace the link between these buildings and the history of nation. Thus, in his research Urquízar-Herrera provides an extensive approach to the transformation of the interpretation of the buildings through negotiation of their origins and symbolic meaning.

In almost all the territory of Spain, especially in cities like Toledo, Córdoba, Seville and Granada, an important number of Islamic constructions were still preserved in the Early Modern Period. As it is quite well-known, these buildings were submitted to different architectural transformations (the erection of the Christian cathedral in the middle of the Córdoba's Mosque, the conversion of the Giralda tower into a belfry, the construction of the Palace of Carlos V inside the Alhambra Palace complex etc.). Nevertheless, their symbolic meaning and historical identity were also transformed in many cases by using various strategies. These transformations have been explained and dealt with by Urquízar-Herrera, revealing how the monuments' historical origins were changed and their identity de-naturalized, for example, by trying to prove a pre-Islamic past (Roman, Phoenician, Visigoth etc.).

The book consists of three parts and an additional final part with concluding ideas; the parts are structured into ten chapters. In the first part, the initial reception of the Islamic monuments has been examined, mainly during the Reconquista and immediately afterwards. The second part explores the creation of an antiquarian interpretation framework. The third part considers the use of the newly-created antiquarian framework for the religious appropriation of Islamic monuments, "leading to the rationalization of Spain's Christian restoration on the basis of archaeological tools and forgeries associated with these buildings" (9). Thus, this part traces genealogical proposals of the ancient origins of the temples with the aim to claim that Christian worship had endured uninterrupted even through the centuries of Islamic rule.

One of the most important qualities of the book is the fact that the author has analyzed a very wide range of primary sources (the bibliography of the cited ones consists of more than 100 publications). He shows the enormous ambiguity of those texts and, thus, the problem of identity building in general. Urquízar-Herrera examines both the texts with arguments against Islam and Islamic buildings (with the aim to de-naturalize them) as well as favorable ones, simultaneously revealing the lack of consistency in the descriptions of these monuments even within the same text. Thus, the reader has an opportunity to track the diverse panorama of attitudes regarding the specific Islamic monuments. For example, this is the case with the world-famous Mosque of Córdoba. Some authors paid a lot of attention to its architectural description, even appreciating and admiring its aesthetic qualities without denying its non-Christian origin. Nevertheless, others, using questionable theories, tried to affirm the Mosque's Roman historical origin (that refers to the previously constructed temple dedicated to Janus Augustus) and then even to prove its connection to early Christianity (by claiming that Janus could be identified with Noah).

Another aspect, briefly examined by Urquízar-Herrera, which deserves to be mentioned, is related both to descriptions by Spanish scholars of Islamic monuments elsewhere and to testimonies by foreign travellers about the Muslim artistic heritage in Spain. In both cases, there was no need to think about building an identity and no interest to pay special attention to the historical complexity. Therefore, Spanish texts about other Islamic monuments and cities were very similar to those produced in other countries, which could even be related to the first wave of Orientalism around Europe. And, due to the same reasons, foreign travellers in Spain did not pay attention to debates about religious issues or historical origins either which were so crucial for the local people; they "displayed an unprejudiced attitude to Islamic architecture" (211).

Overall, Urquízar-Herrera's book is undoubtedly very informative and could be regarded the top of the iceberg, because it creates a desire and thus invites the reader to investigate the primary sources (or at least some of them) used by the author. Thought-provoking is the fact that the early modern vision analyzed in this book changed almost completely afterwards, when the same Islamic monuments became crucial in the creation of the Exotic and Romantic image of Spain during the 18th and, especially, 19th century. By his extensive research, Urquízar-Herrera has confirmed that in the Early Modern Period Spanish historiography problems related to the construction of the national identity were tightly connected to the country's historical complicity and to its Islamic heritage, which somehow needed to be christianized.

To add a brief final note, related closely to the content of the book and complexity of the issues it touches upon, the author of this review would like to involve a short conversation which occurred recently, talking to an old Spanish lady in the bus from Granada to Ronda. The lady said - "Oh, yes, the Alhambra is so beautiful and admirable. But we always need to remember that it is not ours. It has been built by others".