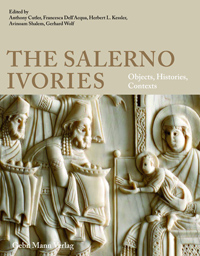 The so-called "Salerno ivories" are a group of more than sixty carved ivory plaques, commonly attributed to eleventh- or twelfth-century Salerno. They were the subject of numerous studies, conferences and an exhibition held in the Museo Diocesano di Salerno ("L'enigma degli avori medievali da Amalfi a Salerno", 12/2007-04/2008 [1]), where most of the ivory plaques are kept. What is formulated as the "enigma" of these ivories in the exhibition title, is also central to The Salerno Ivories. Objects, Histories, Contexts (2016). The essays gathered in this volume revolve around the ongoing debates on just about everything to do with these plaques: their date and place of production, patronage, their iconography and - not least - their original function.

No mere collection of articles, the volume is the result of a scholarly undertaking, initiated in 2007 by Francesca Dell'Acqua and the Kunsthistorisches Institut in Florence - Max-Planck-Institut, punctuated with gatherings in Amalfi (2009), Washington D.C. (2011) and Florence (2012). While many questions remain open to debate, the volume has the great merit not only to return to the material of the plaques, which are discussed and shown from all sides and angles, but also to reframe these questions within broader considerations of art production in the medieval Mediterranean, thus raising fundamental issues about art historical methods.

The editors have - for a reason - refrained from grouping the seventeen essays, which are in fact closely interconnected, within subchapters. Mentioning some of the underlying thematic strands here, however, will help to convey the breadth of the volume's contents.

The first set of essays (Baraldi et al.; Cutler; Guérin) is concerned with the material and the making of the ivory plaques. The contribution by Pietro Baraldi, Paolo Bensi, Andrea Rossi and Paolo Zannini combines historical and scientific analyses to investigate traces of polychromy on the Salerno ivories. Sarah Guérin and Anthony Cutler's papers turn to the tusk itself. Pointing at traces of cementum on the edges of plaques and the varying heights of panels, Guérin demonstrates that the carvers were working from a limited stock of ivory, that is more likely to have reached Salerno as an endowment than through trade. Cutler's article, which draws upon a detailed study of technique, begins with valuable insights into the practice of the unknown carvers at Salerno and ends with an assessment of the Salerno ivories' relation to Middle Byzantine practice and to the so-called "Grado ivories".

The next group of essays (Bernardi / Gasbarri; Crivello; Guardia; Milone; Tasso) brings in case-studies of objects pertaining to or related to the Salerno ivories. Giovanni Guardia's article on the "Farfa casket", attributed to eleventh-century Amalfi, considers changes to the casket's original appearance and provides excellent photographs of the object during conservation treatment. Gabriella Bernardi and Giovanni Gasbarri turn to ivories from the collection of the Museo Civico Medievale in Bologna, shedding light on the history of their interpretation and attribution to different Mediterranean centres, including Southern Italy. Two articles are dedicated to the Grado ivories (Milone; Tasso), a group of ivories believed to have come from a chair given to Grado cathedral in the seventh century. Francesca Tasso's study of historical sources traces the biography of the "Grado chair". Antonio Milone's article, which is concerned with both the Grado and the Salerno group, delves into the early history of ivory studies in eighteenth-century Italy, focusing on the Florentine scholar Angelo Maria Bandini (1726-1803). Crivello's article, which offers a great overview for the study of ivory carving in Southern Italy ties these objects together, proposing a chronology. He attributes the Amalfi group, including the Farfa casket, to the 1070s and proposes that a separate specialized workshop emerged in Salerno after this date.

The following group of essays proposes iconographical analyses of the Salerno ivories in the context of their production in medieval Salerno (e.g. Blessing / Carile; Caskey; Evangelatou; Kessler; Teteriatnikov). Patricia Blessing and Maria Cristina Carile's study of architectural elements in the iconography of the Salerno ivories points at parallels with Fatimid architecture, for example, and thus demonstrates the interconnectedness of the shores of the medieval Mediterranean. To varying degrees, both Herbert L. Kessler and Maria Evangelatou's articles are concerned with realism in the iconography of the Salerno ivories. Kessler argues that realism is strategically employed in the New Testament scenes in order to engage viewers in a spiritual vision. Evangelatou concentrates on the depiction of plants and their exegetical function within the Salerno ivories. Natalia Teterianitkov focuses upon the depiction of the Women at the Tomb on one of the Salerno plaques, arguing that the artist depicted the liturgical "visitatio sepulchri" ritual and not merely the Biblical scene. This is an argument, which would tie the Salerno ivories to the context of the Benedictine monastery at Montecassino.

In a superb combination of close iconographic reading and contextual analysis, Jill Caskey focuses on the depiction of miracles and healing in the Christological scenes of the ivories to reflect about their function in Salerno, which was a centre both of medical learning and pilgrimage. Ruggero Longo and Elisabetta Scirocco also investigate the original viewing context of the ivories, based on their assessment of documentary and material evidence about the interior of Salerno cathedral. Ruling out several hypotheses about the plaques' original function, they suggest that they were most plausibly used on a chair. Francesca Dell'Acqua's contribution concurs with this suggestion. Her ingenious reading of the back and front of the plaques is assessed within the context of eleventh-century Salerno. According to Dell'Acqua the high status of the archiepiscopal see and its tradition of learning may explain the quality, complexity and realism of the scenes.

The remaining contributions (Eastmond; Shalem) raise methodological issues about the study of Mediterranean artefacts and "an art history obsessed with origin tales", as Gerhard Wolf puts it in his foreword to the volume (7). Shalem's sophisticated reflection on the status of objects in art history and anthropology posits that in the age of globalism, objects like the Salerno ivories need to be freed from their boundaries and subjected to new approaches. Presenting diverse ivory objects attributed to medieval Southern Italy, Antony Eastmond notes that these objects have been left "displaced from broader histories of art" (97), as they do not fit modern art historical categories. He claims that asking about the consumption of these objects within the context of a culturally diverse Southern Italy could be more productive than attempting to solve the enduring "enigma" of their production.

It is surprising that only few of the studies explicitly relate to these strong methodological appeals. In fact, a slightly more invasive editorial process would have been helpful to underline contrasting approaches and/or interrelations between the different contributions more explicitly. Besides, a more extensive introduction to the Salerno ivories and related objects - including their number, where they are kept, and hypotheses regarding their function, dating and localisation - would have helped to make the volume more accessible to readers unfamiliar with the objects.

The important reminder in this volume that "solving enigmas" is not all art history can and should do and the very fruitful repositioning of the Salerno ivories within their Mediterranean "historical framework and cultural milieu" (10) are a major step forward. Together with the excellent photographic apparatus, this will undoubtedly encourage and enable further investigations and new ways of thinking about these and other Mediterranean objects.