Zachary A. Matus: Franciscans and the Elixir of Life. Religion and Science in the Later Middle Ages, Philadelphia, PA: University of Pennsylvania Press 2017 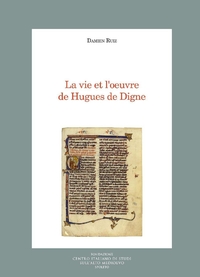 Ever since the publication of the first critical edition of Salimbene da Parma's chronicle by Oswald Holder-Egger between 1905 and 1912, scholars of medieval Franciscan life and thought have been somewhat intrigued by the Provençal friar and provincial minister Hugues de Digne, one of Salimbene's heroes, at once presented as a 'great Joachimist', and as a fearless critic of high religious and secular dignitaries, who decried the emerging deviations from the Franciscan life of evangelical poverty, and allegedly maintained cordial relations with the Franciscan minister general Giovanni da Parma, as well as with luminaries like Robert Grosseteste and Adam Marsh. Moreover, Hugues had an even better-known sister, Douceline, who came to be recognized as founder of the Beguines of Marseilles, and after her death became the recipient of a religious cult.

The scholarly interest in Hugues de Digne has led to a significant scholarly output, part of which focused on the felt discrepancy between Salimbene da Parma's portrayal of Hugues as a convinced Joachimist, and the actual content of several of the works ascribed to him, namely a small treatise entitled De Finibus Paupertatis, a Disputatio inter Zelatorem Paupertatis et Inimicum Domesticum Eius, and a rule commentary, known under various titles (Expositio Regulae Fratrum Minorum/Elucidatio super regulam Fratrum Minorum). This scholarly engagement also led to the production of several new editions of these texts by Claudia Florovsky (who edited De Finibus Paupertatis in 1912), Alessandra Sisto (who included an edition of all three texts in her 1971 monograph on Hugues and Douceline) and David Flood (who issued a new critical edition of the rule commentary in 1979).

Ever since his graduate studies, Damien Ruiz has developed into one of the leading scholars on Hugues de Digne. Ruiz has done much to situate this friar in the socio-religious and intellectual life of the Provence region during the first half of the thirteenth century. In the course of his investigations, Ruiz also was able to sort out many questions that had been raised about the authorship of the works ascribed to this Provençal friar. Most importantly, he was able to conclude in 2002 that the ascription of the dialogue Disputatio inter Zelatorem Paupertatis et Inimicum Domesticum Eius was probably erroneous, and this evaluation seems to have been accepted by other specialists in the field.

The present book - a thorough reworking of Ruiz' 2009 doctoral thesis - forms the culmination of the author's interaction with Hugues of Digne, his works and his reputation within the order. It is divided in three main parts: one centering on the figure of Hugues de Digne (four chapters), one devoted to his authentic works (three chapters), and a final part supplying new critical editions of these texts.

The first part on the Sitz im Leben of the person, furnishes an exhaustive study of the family background and career of this medieval Franciscan friar, complete with a careful reconstruction of his educational trajectory, his place within the Franciscan Provence province, and his involvement with the penitential movement of Hyères and the religious choices of his sister Douceline.

The second part on the authentic works amounts to a careful presentation, contextualization and an in-depth codicological and philological analysis of the manuscripts (and/or manuscript fragments) of De Finibus Paupertatis and Hugues' rule commentary, both of which are important documents to chart the medieval poverty discussions in the Franciscan order.

For true specialists of Franciscan order history, the third chapter of this second part is particularly exciting, as it charts the overt and unacknowledged use of Hugues' texts and of De Finibus Paupertatis in particular throughout the later medieval period, notably in works connected with the poverty controversies just mentioned, but also in other important Franciscan institutional, theological, historical, hagiographical and homiletic texts.

The third and final part containing the new critical editions caused me to reflect on a question not really answered by the author, namely to what extent these new editions differ from and are an improvement over the editions that we already have. After all, De Finibus Paupertatis received its first critical edition in 1912, and Hugues' rule commentary was the recipient of a very well-done critical edition in 1979. Although the author mentions these editions, and occasionally refers to them in his footnotes, he does not really explain how his editorial principles deviate from those used by his predecessors. Nor does he indicate to what extent the established texts in his editions differ substantially from the older editions available to us. Although I do not doubt the philological acumen of Ruiz and the scholarly value of the editions presented in this study - indeed, they seem to be impeccable -, I am a bit concerned that it signals a wider tendency in medieval scholarship of redoing complete editions of already edited texts with a relatively limited manuscript dissemination.

These concerns notwithstanding, I am content that we now have this in-depth study of the life and works of Hugues de Digne. It elucidates many details concerning Hugues' cultural background, his activities in the order, his involvement with the penitential movement and his role in the emergence of the Friars of the Sack. It also depicts a wide and insightful panorama of Hugues' legacy within the Franciscan order all the way up to the sixteenth century. In all these respects I am convinced this is the definite study on this Provençal friar.