Zachary A. Matus: Franciscans and the Elixir of Life 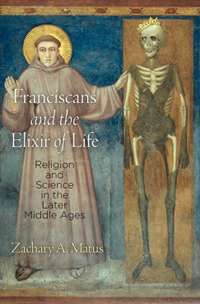 Although Franciscan general chapter regulations forbade friars to pursue alchemical practices, and alchemy was never part of the order's scholarly curriculum, modern scholars have identified several Franciscan friars, as well as people with close connections to the order or its dissidents who wrote extensively on alchemical matters. This sometimes took place within a purely pharmaceutical framework, but also because of religious concerns for material and spiritual renewal. Most work on this topic has been done by Italian specialists, such as Paolo Capitanucci, Chiara Crisciani, Agostino Paravicini Bagliani, Michela Pereira, and Giancarlo Zanier. They have singled out the real or alleged alchemical interests of Elias of Cortona, Paolo of Taranto (Pseudo Geber), Bonaventura of Iseo, Roger Bacon, Pseudo Ramon Llull, Pseudo Arnald of Villanova, Vital du Four, Raimond Gaufredi, Jean de Roquetaillade, and Evangelista Quattrami. Beyond Italian scholarship, which has done much to make sense of the works produced, both within the wider late medieval alchemical context and in relation to a potential 'Franciscan' scientific outlook, scholars publishing in French and English have concentrated predominantly on the alchemical efforts of Roger Bacon and Jean de Roquetaillade. Cases in point are the studies of Edmund Brehm, Lea De Vun, Faye Getz, Robert Multhauf, William Newman, and Steven Williams.

Considering this respectable scholarly engagement with Minorite alchemical texts and their alleged Franciscan Sitz im Leben, I began my reading of this book both with high expectations and with some apprehension. I was keen to find a monograph in which the alchemical interests and in particular the transmutative qualities of elixirs and/or the quintessence in the works of various friars would be elucidated further. Yet I was at the same time afraid that the concise nature of this study would be indicative of a rather essayist and selective approach, and that it would not offer much beyond what is already provided by existing scholarship.

Matus discusses the alchemical works of three Franciscan friars, namely Roger Bacon, Vital du Four, and Jean de Roquetaillade (John of Rupescissa), and shows how their alchemical elixirs either were a potential means to reshape bodies and the Christian world within a specific eschatological context (Bacon and Roquetaillade), or were first and foremost presented as a powerful medical compound (Vital du Four). He tries to understand the texts of these friars within their relevant conceptual frameworks, exploring each of these in a separate chapter.

Chapter one is devoted to the Franciscan relation with the natural world and argues that, condemnations notwithstanding, the pursuit of alchemy can be linked to the Franciscan celebration of and interest in the creation. Following a line of thought pursued by many scholars since Hilarinus Felder, Matus postulates that Franciscans tended to embrace creation as God's gift and, as Bonaventura of Bagnoregio and Olivi would have indicated, within certain bounds saw the study of the natural world and natural philosophy as a legitimate undertaking to understand the spiritual value of the cosmos and man's place and future therein. As such, alchemical studies would not have been completely at odds with Franciscan intellectual concerns.

Chapter two traces the Franciscan elixir tradition and asks attention for the similarities but also for the differences between the elixirs described by Roger Bacon, Vital du Four, and Jean de Roquetaillade. In Bacon's discussion of speculative and operative alchemy, linked with his concept of scientia experimentalis, the elixir is an elementally balanced composite to restore bodily equilibrium, emulating the qualities of the resurrected body. It can also enhance mind and morals, and even provide knowledge of God, all of this with the help of divine grace. More mundane is Vital du Four's aqua ardens, described as a naturalistic blend to preserve health and to perfect a wide range of other alchemical and medical processes. Jean de Roquetaillade, in turn, treats the distillation of his elixir or quintessence within an eschatologically charged devotional context, describing it as a heavenly substance inherent in everything created, which, once isolated, can be used to heal and perfect the human body. The latter, as was the case with Bacon, would be of great help to the champions of evangelical perfection.

Chapter three connects the alchemical interests of Bacon and Roquetaillade in particular with strands of apocalyptic thought, as that might have been a major motivational force for engaging in alchemical speculations to begin with. Considering the Franciscan order or a number of its most perfect members as important agents in the upcoming conflicts with Antichrist, as suggested by a variety of Joachimist prophecies, alchemical practice had a number of objectives, described differently by the authors in question. For Bacon, the elixir, like other products of his scientia experimentalis, would facilitate the spread of Christianity near the end of time, by fortifying missionaries, helping Christians to counter the powers and temptations of Antichrist and his allies, and to change the complexion of other people, so that they could become susceptible to Christian truth. Whereas the aqua ardens of the conservative Vital du Four was not conceived to function within the same apocalyptic endgame, it certainly was the case for Roquetaillade's quintessence, which was to be a weapon of the viri evangelici against Antichrist, allowing them to oppose him while sustaining their life and purity: being provided with an elixir-enhanced body and mind would protect them in times of tribulation.

Finally, Matus discusses in chapter four the nature of Franciscan alchemical practice, again with an emphasis on the works of Bacon and Roquetaillade. The way in which these friars approached alchemy might possibly best be understood from the angle of Franciscan ritual life, also to make sense of the actual efficacy, or lack thereof, of the elixirs in question. The same angle also would allow for a proper insight in the way in which these friars defended themselves against accusations of magic, arguing that the operative power of alchemical practice was dependent on God's will, and was only successful with a proper devotional disposition, not unlike the full spiritual benefit of the Eucharist according to Franciscan theologians depended upon the correct cognitive, devotional and intentional attitude of the believer, brought forth by prayer, contemplation and liturgical enactment.

As said before, those interested in Franciscan alchemy already have access to a significant body of scholarship, albeit mostly in Italian. Does Matus have many new insights to offer? My answer would be that this is not really the case. Overall, he does not provide interpretations that invalidate those to be found in the works of previous scholars, several of who also deal with Franciscan alchemists not discussed in Matus's text. The single most innovative aspect seems to be his proposal to understand Franciscan alchemical practice from a ritual angle and the concomitant reflection on the question how this relates to instrumental and scientific alchemical practices. Beyond that, much of what Matus presents can be found in more detail in the works of Capitanucci, Crisciani, Pereira, and others mentioned above. That being said, the present study is very useful to provide monolingual students with a proper introduction to Franciscan alchemy, and more in particular to the curious preoccupation with the distillation of the elixir of life.