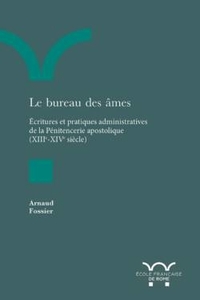 The book begins with two chapters presenting the history of the Penitentiary during the time period under scrutiny. Chapter 1 is a precise introduction to the early history of the Penitentiary in the 13th century and the first decade of the 14th century describing convincingly, how the office developed little by little around the cardinal penitentiaries and papal confessors to whom the popes had delegated certain powers to absolve Christians from severe sins.

Chapter 2 describes the history of the office during the Avignon papacy and the Great Western Schism, of which especially the later period has never been discussed in proper details. The presentation in both chapters is based on a careful analysis of a number of different sources and research literature.

The two following chapters concentrate on the close analysis of the existing source material from the Penitentiary. Chapter 3 examines the Penitentiary formularies from the 13th and 14th centuries and binds them to the tradition of written culture and different kinds of ecclesiastical and juridical manuals from the period. In chapter 4, instead, the surviving letters of the Penitentiary, different formulations in them, and their significance are examined thoroughly.

Chapter 5 continues with analysing the formulations in the Penitentiary letters, in particular the relationship between the wordings in the ecclesiastical (canon law) regulations and the Penitentiary documentation. In this chapter the author bases his analysis upon a large number of texts of the church fathers and other writers as well as upon regulations of canon law from the early church to the 13th century and makes a convincing summary about the adaptation of the phraseology of canon law to the Penitentiary texts.

The book ends with the very interesting chapter 8 concerning the competence of the Penitentiary in the different fori of the Church: the forum of conscience (or penitence) and the juridical forum. In this chapter the author takes up what is the history and meaning of the different fori and how they reflect the meaning of the graces granted by the Penitentiary to Christians. To Fossier, one of the central concepts in this discussion is the definition of scandalum and what it actually meant in the religious life and how far the Church was ready to go to avoid it.

Arnaud Fossier has based his detailed study on different source material from several centuries and it is evident that he knows his material very well. The author convincingly discusses with Saint Augustine and Saint Thomas Aquinas, important authors of the various collections of canon law, the Penitentiary formularies compiled for or by the cardinal penitentiaries of the 13th and 14th centuries, as well as with the late medieval Penitentiary registers. His work is solidly based on a number of previous studies on the Penitentiary, although he has not included the latest research that has been published after he defended the first version of this book as his doctoral theses in autumn 2012. Also, the list of edited Penitentiary sources is unfortunately outdated and includes only some of the editions existing now.

Nevertheless, the volume is without doubt an important contribution to the Penitentiary studies because it discusses a time period seldom taken into account by scholars dealing with the Penitentiary records. Also, the publication takes up interesting and important themes such as concurrence in jurisdiction between the papacy and the local ecclesiastical authorities, which until now have been discussed only rarely.

And finally, the importance of the book lies also in the fact that it is written in French. Since the earlier scholarship on the Penitentiary is mainly written either in German or in English, this book offers the possibility to learn about the Apostolic Penitentiary to a larger audience.