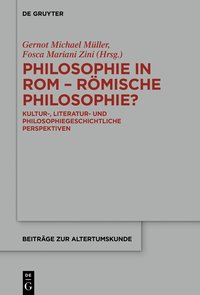 Cicero and Seneca dominate this collection of essays. That is apparently not by design: the volume, following the conference from which it arose, is intended to explore the ways in which philosophy was adapted and developed as well as "merely received" by the Romans of the later Republic and early Empire in general. One interesting reason why some two-thirds of the papers (11 out of 18) end up being about Cicero or Seneca, or both, is that these writers seem to exemplify contrary trends in some degree: Cicero, especially in his earlier philosophical works, is readier to subordinate sectarian affiliation to existing social practice; Seneca, though capable of innovation, nevertheless cleaves to 'orthodox' Stoicism, which he deploys with the aim of reforming aristocratic mores. Two papers early in the volume, by Jochen Sauer and Therese Fuhrer, argue for precisely this difference. It is unfortunate that one cannot control for the possibility that it is a difference that results from sectarian affiliation on Cicero's part after all, namely to scepticism, which naturally encourages acquiescence in native behaviours (e.g. Sextus Empiricus, PH 1.17, 23-4); but whatever the case, it is subsequently borne out in discussions of Cicero by Jonathan Powell (arguing that his political works are analytical not utopian), Catherine Steel (encouraging us to bear in mind his personal circumstances as relevant context for his writings), Carlos Lévy (on his loaded choice of the word temeritas to refer to the 'hasty assent' to impressions avoided by the sage), Fosca Mariani Zini (exploring his literally forensic approach to consolation); and of Seneca by Claudia Wiener (showing that what might appear compromises with Stoicism are actually alternative ways into it), Jula Wildberger (finding an inflection of the Stoic theory of love in a focus on friendship between proficientes in Seneca), and Jörn Müller (on Phaedra as a case study in Stoic akrasia).

Just seven papers, then, each focussing on one individual, are left to justify the editors' extrapolation to broader generalisations about the absorption of philosophy as such into Roman culture as a whole. There is one each on Horace (making an exemplum of himself: Gernot Müller), Antiochus (selling his school on its claims to antiquity: Georgia Tsouni), Philodemus (who included a detailed discussion of arrogance designed to appeal to Romans in his book On Vices: Daniel Delattre), Lucretius (the notorious superabundance of whose arguments exploits the rhetorical trope of περιουσία: Michael Erler), Quintilian (who develops the late-Ciceronian political ideal of the wise orator in preference to the 'Platonic' model of the philosopher-as-ruler, as Thomas Schirren shows in his 58-page contribution), and Pliny (whose narrative - not analysis - of the natural world connects the Roman empire with the work of Nature herself: Bardo Gauly). It is a sign of the challenge facing the editors that, having made the decision to group the papers into thematic sections, they end up with some containing not more than a single paper, and none encompassing more than two.

I do not mean to undersell the quality of the scholarship on offer here. The volume makes a clear and useful contribution to our understanding of the way in which authors who wrote for a Roman audience used Roman tropes in the choice and expression of their philosophical interests - notably through appeals to exempla, the mos maiorum, and rhetorical techniques familiar from the courtroom and senate-house. It is, in short, a fine collection in its parts, and it has been admirably and thoughtfully curated by the editors within the terms of existing scholarship on Roman philosophy. But there is a problem with the terms of existing scholarship, which starts with the idea that one can talk as if philosophy is something that only acquired a cultural inflection when it came to Rome. (It is the converse case, but the same fallacy, as that of the Englishman who amazes himself with the realisation that he alone in the world does not speak with an accent.) Of course, it might be that we simply do not have the evidence that would be needed to ask what philosophy looked like when it was produced in Alexandria or Rhodes as opposed to Athens or Rome; or, again, to see what difference it makes, if any, when a writer was not Greek by origin but, for example Syrian (as were both Tsouni's Antiochus and Delattre's Philodemus) or Anatolian (Crates of Mallos, whose early visit to Rome is discussed by Jean-Christophe Jolivet in the opening essay of the book). But it seems incautious to ignore the question and allow the impression that 'philosophy' was something culturally monolithic before the Romans got their hands on it.

And not just incautious: it makes 'Roman' philosophy seem parochial and isolated. As I noted at the outset, the editors give arguments for championing the model of "adaptation" over "mere reception": "nicht nur einfach rezipiert", they say (13). But they are arguments which tend in exactly the opposite direction to their expressed intention of uncovering the sophistication of Roman philosophy. It is "adaptation", not reception, that is "nur einfach". Reception, in the best Jaussian sense of the word, could promise a view of 'Roman philosophy' as something in dialogue with the wider philosophical world, rather than being an appropriation away from it. Such a perspective might also encourage volumes like this to say more about the very many Roman philosophers (take whatever definition of that designation you like: Romans who were philosophers, writers of philosophy in Latin, philosophers in Rome, and so on) who certainly did engage with a broader Mediterranean audience beyond the limits of the metropolis, and whose exclusion can only be explained by a drive to insist on the generalisations that would be falsified by their inclusion. The people considered in this volume deserve all the attention they can get, but they offer us a very partial perspective on 'Roman philosophy'.

There are two papers in this volume which do not seem to fit the brief at all. One, by Tobias Reinhardt, argues that Augustine's well-known turn to subjectivity in epistemology might partly be shaped by a new (or a mis-?)understanding of the cataleptic impression which he found in Cicero. (Cicero took it that it is the impression, not that of which it is an impression, that is securely grasped.) The other, by Clara Auvray-Assayas, studies what is probably a late-antique anthology of texts which testifies to Cicero's reception among Neoplatonists. Both papers are very good; and both show that Romans - well, again, Cicero - won his place in the history of philosophy; but neither shows that he did this in virtue of his Romanitas.