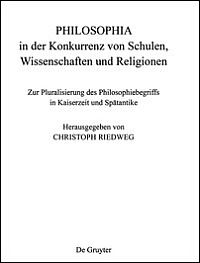 When people claim to be writing "history of philosophy", it often turns out that what they are really writing is the history of particular philosophers or philosophical schools. This may be one reason why the philosophy of later antiquity has generally received less sustained attention than the more neatly demarcated movements that preceded it - with the striking exception of Neoplatonism, a movement which gives us both remarkable individuals and intellectual lineages we can follow. So it is by refreshing contrast that the present volume, which has its genesis in a conference held at Zürich in 2014, precisely addresses "philosophy" - that is, as a field of activity. As its editor, Christoph Riedweg puts it in his introduction (1), the volume is intended to reflect on the "proliferation of positions" in the post-Hellenistic period - a proliferation made possible (as Riedweg goes on to argue) by the structures of the Roman Empire. (To this, one might perhaps add the "deregulation" of philosophical affiliation consequent on the collapse of the Athenian schools.) The studies collected by Riedweg make a valuable contribution towards mapping the bewildering complexity of "philosophical" conversations that result from this proliferation - indeed, towards encouraging us to think in these terms about the intellectual geography of later antiquity. (Riedweg specifies the temporal scope of the collection as first to seventh centuries CE: 2.) In practice, they do so especially by focussing on intellectual "borderlines", where there is discussion to be had about where the philosophy stops and something else begins.

The initial contributions set the scene: first, with some broad orientation within major epochs and themes of the period (Matthias Perkams, "Einheit und Vielfalt der Philosophie von der Kaiserzeit zur ausgehenden Antike", 3-32); then with specific characterisation of the early post-Hellenistic Platonist movement, whose work, and that of its successors, is a core point of reference for the volume as a whole (Franco Ferrari, "Esegesi, sistema e tradizione: la prospettiva filosofica del medioplatonismo", 33-60). Against this backdrop, a large number of the contributions that follow tackle porosity between religious and philosophical discourse. In an especially thoughtful and innovative piece, Einar Thomassen explores how Gnosticism both denies but also learns from "philosophy" ("Gnosis and Philosophy in Competition", 61-74). But this is only the first of several papers which highlight a similar ambiguity in attitude towards "philosophy". Jutta Leonhardt-Balzer later in the book finds a cognate debate within Judaism over the value of engaging with philosophy ("Synagogen als Schulen der Tugenden: Der Ort der Philosophie in der frühjüdischen Tradition", 127-46); and Samuel Vollenweider ("Barbarenweisheit? Zum Stellenwert der Philosophie in der frühchristlichen Theologie", 147-60), Dietmar Wyrwa ("Philosophie in der alexandrinischen Schule", 193-216), Marie-Odile Boulnois ("Païens et chrétiens en concurrence: L'instrumentalisation de la philosophie dans les controverses d'Origène contre Celse et de Cyrille d'Alexandrie contre Julien", 217-56) and Therese Fuhrer ("Erzählte Philosophie: Augustin und das Konzept der 'Philosophie als Lebensform'", 301-18) explore the different degrees to which different Christians felt able to embrace - or compelled to adapt - philosophical models as a means of exploring their intellectual identity. Two papers show that philosophy remained alive and welcome, first in contexts often assumed to be hostile to it, as in the case of Islam (Cleophea Ferrari, "'Die beste Religion gleicht der Philosophie': Der Philosophiebegriff im arabisch-islamischen Mittelalter im Streit zwischen Ratio und Offenbarung", 337-54), and secondly in a context assumed to be more interested in its value as cultural capital (Katerina Ierodiakonou, "Philosophy in Transition: From Late Antiquity to Byzantium", 319-36). (These latter two papers occupy a slightly awkward place within the volume, it might perhaps be said: they are both very interesting points of reference in their own terms, and relevant thematic complements to the other papers, but they relate to cultural contexts which are less obviously in dialogue with them, and give the impression of standing somewhat apart.)

Alongside these studies, which take the perspective of thinkers and movements wondering what to make of philosophy, or of themselves as philosophers, a complementary group of papers looks at how philosophers learned from, "thought with", or were shaped in their turn by religious practices: these include Johan C. Thom, "Sayings as 'Lebenshilfe': The Reception and Use of Two Pythagorean Collections" (75-98); Jan Bremmer, in another agenda-setting piece (a "first exploration", 124), "Philosophers and the Mysteries" (99-126); and Polymnia Athanassiadi, "A Global Response to Crisis: Iamblichus' Religious Programme" (257-90). And not just religious practices, but cultural practices more widely, as in the case of Irmgard Männlein-Robert, "Philosophie als Philologie? Der Platoniker Longin und seine Kritiker" (161-78) - which shares with Franco Ferrari's paper what strikes me as a slightly deflationary emphasis on the exegetical aspect of "Middle" Platonism; Gretchen Reydams-Schils, in a very useful study of a key ethical notion in "Plotinus and the Stoics on Philosophy as the Art of Life" (179-92); and Dominic O'Meara, "Lady Philosophy and Politics in Late Antiquity: A Tense Relationship" (291-300), with a focus on Synesius and Boethius.

In a useful, short "Zusammenfassung und Ausblick", Christoph Riedweg returns to draw some conclusions. These include that: pluralisation in philosophy goes together with a pluralisation in ways of life; ethics and religion become key components in philosophical discourse; and Platonism is a dominant presence throughout. Different readers may find different conclusions. For example, the prominence of "ways of life" (including, one might say, religious belief and practice) in this characterisation of philosophy is partly determined by the methodology of the project: they inhabit natural "borderline" areas for philosophical discourse, areas where "philosophy-like" activity will naturally come to rub shoulders with self-describing philosophy. It is, arguably, too quick to suggest that this phenomenon exerts pressure on what should be our focal understanding of philosophy. And indeed, Ierodiaonou's is not the only paper in the volume to illustrate the vitality of traditional and technical philosophical debates: Perkams and Franco Ferrari both emphasise the theological as a meeting-point between theology and religion; Boulnois highlights specific metaphysical issues in certain Christian controversies; Fuhrer discusses how Augustine's Christian anthropology transforms his reception of Greek ethical theory. It is worth emphasising this in order to resist the danger of taking Riedweg's conclusions to support the view that there is less of technical philosophical interest in later antiquity just because there is also a widening of the margins of philosophical engagement. What to me is most useful about this collection is precisely the perspectives it offers on the way in which contrastive identities between different intellectual groups were preserved even while commonalities were explored along their various borderlands. As such, it makes a valuable contribution to the possibility of writing a true history of "philosophy" in later antiquity, just insofar as the term covers an increasingly rich complexity of conversations and arguments.