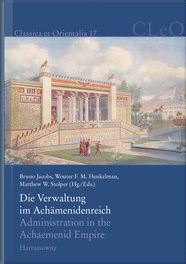 Die Verwaltung im Achämenidenreich // Administration in the Achaemenid Empire collects a series of eighteen chapters which all deal with different aspects of the Achaemenid Empire's administration. The chapters, written by a variety of specialists, cover multiple themes and source corpora - from empire-wide sealing practices and the use of languages, to administrative practices in Babylonia and Egypt, as well as the utility of Graeco-Roman authors in understanding the empire's structure. The chapters are isolated studies unto themselves, with little connections amongst each other - save the fact that they all deal with "administration" in one way or another. Nonetheless, the introduction (VIII-XXXV) centers the book around the following key-objective: "tracing the imperial signature".

The "imperial signature" of the Achaemenid Empire can be understood as the "impact of Achaemenid administrative and institutional structures as manifest in various contexts and on various levels" (80). The objective to trace and chart that impact is not new. But the way that this has been done and the conclusions of such endeavors have changed profoundly over the last forty years. Whereas invisibility and elusiveness, as well as weakness and imperial "decline" loomed large in earlier studies on the Achaemenid Period, a more positive evaluation emerged in the 1980s. "Decline" was identified as a biased concept, especially influenced by the writings of fourth-century BC Greek authors; they portrayed the Empire as a monarchy which had blossomed under Cyrus the Great, its founder, but which had lost its vigor along the way, causing its own downfall due to increasing tyranny and royal decadence. Historians of the "New Achaemenid History" workshops (1983-1990) rejected this view and started to look for new ways of understanding the state. [1] Old ideas were confronted with native evidence from the Empire's satrapies - and, slowly, an alternative picture of the Empire emerged: a picture characterized by visibility, impact and stability, rather than weakness and elusiveness.

The present book continues this revised interpretation of the Achaemenid Empire and takes it several steps further. This is especially evident in Wouter Henkelman's contribution to the volume. In a chapter of ca. 200 pages (45-256) Henkelman traces the "imperial signature" in the Empire's heartland and its (north-)eastern satrapies. Moreover, Henkelman argues that the administration of the heartland - most explicitly documented by the thousands of tablets of the Persepolis Fortification Archive - served as an administrative template for other regions. In his words, "the cloud of administrative networks, functional hierarchies, logistic protocols and bureaucratic conventions" was perceived by the Achaemenids as a system - a system which could be replicated and applied to other satrapies of their realm, in order to "manage, monitor and develop" them along similar lines as the household economy of the heartland (80-81). Henkelman calls this the "imperial paradigm", and he argues eloquently for its application in e.g. Arachosia. Here we are far indeed from an "elusive empire".

Henkelman emphasizes that his "imperial paradigm" is only a working hypothesis (81). But it is a stimulating one. After all, the source material of the Achaemenid Empire is fragmentary: royal archives such as we know them from the Neo-Assyrian period have never been found; the remnants of satrapal archives are few and far between; and what is left of the lower levels of administration is often chronologically and geographically isolated from other text corpora (XII-XXI). It is therefore difficult to see the empire in the sources, let alone the intricate ways in which it may have functioned and developed over time. Henkelman's study provides the reader with an inspiring example of what we might nonetheless gain from such disparate and ostensibly local sources by looking at them through an imperial lens. This is "tracing the imperial signature" at its finest.

Attempts to "see the empire" are present in other chapters of the book as well (e.g. Lemaire's chapter on the Idumaean ostraca). No matter how stimulating such a perspective might be, it does bring us to a problem which underlies much of the present volume. And that problem is: to what extent is the thesis of a "visible" and "stable" empire actually informed by the sources, rather than imposed on them? The exact opposite question, of course, about an invisible and unstable empire, fueled the revised interpretation of the Achaemenids in the 1980s; and I certainly agree that the Greek thesis of "imperial decline", the ideological bias of which has been amply demonstrated, must be rejected. Yet, to posit "the high visibility of empire" (XI) sounds like the other extreme. When we are confronted with local and often private archives with barely - if any - Persian footprint, the practice of "tracing the imperial signature" is as much an inspiration as it is speculation. Sure, we can assume that imperial designs loom behind specific phenomena (e.g. standardized Aramaic), but such phenomena are certainly not visible in every text corpus, nor does the mere claim of their existence tell us much about the "stability" or "efficiency" of empire. Such interpretations of the material largely rely on the lens (local or imperial; strong or weak power) that we choose to adopt.

The lens of the present book (at least: as posited in the introduction) is evidently one of imperial visibility and continuity, of endurance and sophisticated methods of administration and control. By putting the emphasis on these phenomena, the book avoids several issues that could challenge that view. For example, how the idea of a stable and visible Achaemenid Empire accords with the existence of people living within the Empire's borders but outside of its effective control is barely if ever addressed - even though we have evidence for such "Asterixes and Obelixes". [2] Problems and down-right crises in the empire are also under-emphasized. We are told that we should confront those crises, but only "within the structures that held the empire together" for so long (XXIX; original italics). Moreover, it is suggested that there existed "established patterns in countering crises" (XXIX) and that it was "precisely the durability of existing structures that made it possible to confront a crisis" (XXXI). But this begs the question of what caused those crises in the first place. For example, one of the book's chapters on Babylonia suggests that increased taxation under the Achaemenids caused economic problems and widespread discontent among the satrapy's local elites, a situation which eventually lead to Babylonia's second period of revolt (715-740). So if the administrative system itself actually caused the crisis, how fair is it to emphasize its "stability" in "managing" it? Or does "stability" merely mean that administrative structures remained in place, without saying anything about the (ab)use of those structures? If that is what "stability" and "continuity" means, we are still left with large questions about the effectiveness of Achaemenid rule.

One cannot blame a book for what it does not intend to do. And most of the contributions to the volume do not intend to answer the large questions posed above. As noted, most chapters treat a specific issue, region or corpus, with little interconnections between them. Some build specifically on ideas set out in the introduction (e.g. the chapter by Henkelman, who also co-edited the volume and co-authored the introduction), and these deserve both the praise and the criticism laid out above. Some diverge from this imperial lens (e.g. the chapter by Agut-Labordere, who emphasizes the invisibility of empire in Egypt's Demotic sources) or from the thesis of stability and continuity (cf. the chapters on Babylonia by Kleber and Jursa). On the whole, the book provides the reader with a handful of interesting studies but with little answers to the larger questions of Achaemenid history. I therefore subscribe to the editors' hope that the book will "set a second baseline for ongoing research" (XI) on Achaemenid administration. But I also hope that studies on the "imperial signature" will be balanced by those which continue to explore the limits of administrative control and the fruitfulness of looking at the source-material through alternative lenses.