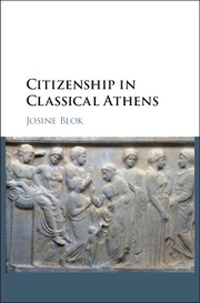 This is an important book. Readers unfamiliar with Blok's previous work might expect a narrow exploration of legal status in Athens, but the reality is quite the opposite - the scope is broad, touching on a wide range of questions about archaic and classical Athens and the complex interrelationships between religion, society, and politics. This means that it will be of interest to - and generate discussion among - specialists not only of ancient law and political history, but also Greek religion, the family, and the role of women. The re-evaluation of what ancient Greek citizenship means in practice will have ramifications beyond Athens, and beyond ancient democratic regimes, too.

The reason for this breadth is due to Blok's central argument that Athenian citizenship is shaped primarily by the bond between human and divine (by extension she argues that this basic conception is applicable to other poleis, albeit expressed in different ways elsewhere). 'Having a share in the polis,' the constituent part of citizenship, is a fundamentally active experience rooted in descent and expressed through participating in the various cults of the polis. This results in a significant reshaping of our understanding of how citizenship worked. No longer can it be conceived of solely in terms of (Aristotelian) participation in political or judicial office; rather, a broader, more holistic notion of citizenship - that takes seriously arguments about the embeddedness of Greek religion - is argued for here. The most important result of this reconceptualization is that women, in particular, are rehabilitated from being passive observers on the side-lines of polis life to taking a central role in the practices and activities of Athenian citizenship. This alone makes the book essential reading and ensures it should be on every reading list.

In order to prove this thesis, Blok poses a number of questions that structure the book: what precisely did citizens share when they 'shared in the polis'? What were the criteria for citizenship and why was legitimate birth so important? How does the vocabulary of citizenship help us understand its meaning? What were the rules of participation and how did they differ based on various criteria of status (age, gender, non-Athenian birth)?

The answers to these questions are rooted in a series of historical-philological analyses. In each chapter the argument rests on close readings of texts and discussion of the semantic ranges of individual words (in various contexts). For this Blok has provided a great service, providing solutions to some difficult problems with clarity. So, e.g., chapter 2 brings together her previous work on hiera and hosia to demonstrate the intracacies of human-divine relationships and how they formed the basis of polis institutions: hiera kai hosia, she argues, represents the bond between the polis and the gods on which the well-being of the community depends. The central purpose of the polis, therefore, is to maintain this relationship. This chapter discusses not only the distinction between hiera and hosia (hiera are the things of the gods which remain permanently theirs; hosia are both the things and the actions that honour the gods and fulfil obligations to them, as well as the rules governing human behaviour towards the gods and towards other humans - these terms do not mean 'sacred' and 'profane' as older scholarship had suggested), but also - because the actions of the polis were geared to maintaining divine and human power - contains useful comments on the development of financial administration in Athens.

Chapter 4, similarly, draws on her 2005 Klio article in which the vocabulary of citizenship is discussed. Here we see how words for 'citizen' (polites/politis, astos/aste, Athenaios/Athenaia) developed over time, and how shifts in meaning and use reflect community formation and development. Here Blok compares the appearance of these terms in different authors/genres in order to map out the nuances of citizenship vocabulary. We see a gradual change over time whereby citizenship was increasingly defined by descent. Crucially, however, the symmetry within this vocabulary indicates that the Athenians considered that men and women shared in the polis equally, regardless of the gender and age restrictions that are found in various specific institutions (ch. 5).

Elsewhere (gene in ch. 3, timai and archai in ch. 5, naturalization in ch. 6), the analysis likewise rests on philological analysis. Future research will need to ask whether Blok's conclusions can be seen in other types of evidence or approaches: can we see reflections of the changing ideology of descent in iconographical evidence or votive practices, or do different kinds of evidence tell a different story? What is the scope of personal religious expression within the overall model of religion that places the polis centre-stage? How are the local practices of Athens related to the panhellenic patterns of Greek religion? etc.

The argument is also broadly New Institutionalist in approach, in that throughout Blok conceptualizes aspects of Athenian society (descent, timai etc.) as institutions. By this she means "the rules, customs and relationships" that underlie social organisation (145). That this body of theory is derived from Douglass North reveals much about the reach of New Institutional Economics within ancient history as a whole. Readers of this review will be aware that NIE has become a dominant presence within discussions of the ancient economy over the past decade or so and has done much to transform questions within that field. [1] Although Blok's reach is wide, she is not, however, interested in questions of economic change (for which North provides a substantial body of theoretical work) but simply in his definition of what institutions are and how they work. One wonders whether the political science tradition of New Institutionalism would form a more secure underpinning to the argument here. [2]

Nevertheless, Blok's approach is operational in that it provides insights into the relationship between those institutions, the society in which they operated, and how they changed over time. In this sense, viewing descent in institutional terms (ch. 3), that is, as the "rule" that structured citizenship, is a useful way of exploring inheritance practices, shaping not only the inheritance of material goods (land, money, property etc.) within families, but also immaterial goods, i.e. the religious traditions, duties, and obligations of the oikos and, by extension, membership in the polis. Blok argues that the latter were inherited equally by men and women. It also allows her to reevaluate the development of the Athenian polis from Solon to Pericles from the point of view of descent as a criterion of citizenship: innovation lies here with Solon, with Cleisthenes and Pericles doing little more than tinkering with a working system. Similarly the complex nexus of timai (honours, values, rewards) that underlie the rules and practices of participation in the polis - from political offices to priesthoods - is also usefully conceptualized in institutionalist terms (ch. 5).

Those familiar with Blok's work will anticipate the general thread of the argument but this does not detract from the fact that the book as a whole makes a substantial contribution to the study of Athenian history and is a rich and rewarding read. It is to Blok's credit that she covers so much ground and points the way to many more avenues of research in the years to come.

[2] See, e.g., Matthew Simonton: Classical Greek Oligarchy: A Political History. Princeton 2017, for an exemplary example of this in practice.