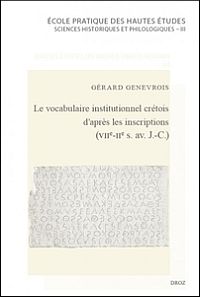 The book falls within the framework of a rich series of linguistic and juridical studies on Ancient Crete [1], choosing nevertheless an original focus: despite its highest importance, in fact, the Cretan institutional terminology is an area of inquiry that has never been explored systematically until now. As the author himself admits, linguists have usually preferred focusing on phonological and morphological peculiarities rather than on a semantic analysis of the lexicon (1). On the other hand, Cretan institutions have been relatively neglected also by historians [2]: the obscurity of many terms, for the most part known only from fragmentary epigraphic contexts, has often led to circular arguments and caused a standoff of the research on many key questions. This volume has the important merit of filling this gap from the lexicological point of view and, at the same time, of building bridges back between linguistics and history.

In the brief introduction (1-12), the author provides a dialectological background for the subject and delineates concisely the history of research; he also illustrates his methodology and lists the typologies of sources he has taken into account, namely inscriptions and literary sources, with a particular attention paid to the ancient glossators.

The core of the work is the rich lexicon, which takes up a substantial part of the volume (13-376). In this section, actually structured as a vocabulary, the institutional words are presented in an alphabetical order, grouped by their roots. It must be specified that, by saying "institutional", the author means every term belonging to the juridical, social, economic, financial, political, cultic and religious spheres (10). For each lexical family he provides an exhaustive etymological and semantic discussion, with remarks on the different usages of the terms in Greek. The Cretan use of the words, examined within the evolving historical background, is contextualized through the reference to or the direct quotation of the relevant texts, mainly inscriptions. When possible, the analysis is also enriched by literary and epigraphic examples of usage of the same words or of equivalent ones from other areas of the Greek world. Frequent comparisons with Attic legislation, in particular, show close affinities as for analogous lexical choices, recurring nexuses and phraseology, from which it may be inferred the existence of a common Greek juridic lexical heritage dating back to the Mycenaean, then developed independently by the single dialects.

The lexicon is followed by two important appendices. In the former, about tribe names (377-393), the author demonstrates that the three Dorian tribes are definitely less frequent and numerically inferior compared to the non-Dorian ones, of pre-Hellenic (Pharkaris) or Achaean origins (e.g. Aithaleis and perhaps Ainaones, Aischeis, Archeia, Echanoreis).

In the second appendix (395-432), a similar reasoning is developed for months, cults and festivals names. Most of them, in fact, are not specifically Dorian or even not Dorian at all. The month Hyakinthios and the connected festival of Hyakinthia, for example, seem to have arrived into the Peloponnese from Crete, and not the opposite. Other months and festivals, attested in different areas of the Greek world, seem to have a Cretan genesis too (Thiodaisios/Thiodaisia). Many cases, moreover, can be identified as specifically Cretan of Creto-Mycenaean origin (e.g. Diktynnaios, Welchanios/Belchania, Leschanorios) or even pre-Hellenic (Komnokarios, Sartiobiarios). Whereas several other cases are likely to have a common Achaean origin (e.g. Enyalios), the derivation of only few month names seems to be from Dorian (Himalios) or pre-Dorian Laconian terms (Amyklaios, if not Semitic).

After a short chapter of final remarks (433-455), the book ends with a last appendix on the Law Code of Gortyn (457-482), where the author presents Willetts' edition of the text [3] along with his own original translation.

From the analysis, the following results emerge. From a lexical point of view, the pre-Dorian substrates (pre-Hellenic and Achaean/Mycenaean) survive almost exclusively in some tribe, month and festival names, as well as in some theonyms, anthroponyms and toponyms. Surprisingly, the evidence of Dorian traits is much less than expected, whereas there are quite a few affinities between Cretan and Ionic-Attic (and Arcado-Cypriot too). These observations lead to the conclusion that the Achaean/Mycenaean has played a major role in the elaboration of the institutional language of Crete. This result, therefore, gives an important contribution also to the historical debate on the nature of Cretan society and institutions, scaling down the weight of the Dorian component.

An undeniable strength of this work is the inclusion in it of a wide range of terms: in addition to the nouns that define stricto sensu institutions (some of which had already received attention) [4], there are also many verbs and other unsuspected words that turned out to have been used in a very technical meaning. Although almost all the significative institutional terms used in Cretan have been included, there is however an imbalance between those peculiar of this dialect (or having a particular use in it) and the ones which are frequent also elsewhere. The broader attention devoted to the former (e.g. more than three pages on μνάμων contra nine lines on δαμιοργός; no words at all on κοινόν) is certainly right in a dialectological perspective, but it may disappoint some readers (at least some historians!). The same can be said also on the choice of discussing, in the appendices, not the totality of tribes, months, cults and festivals but only those linguistically meaningful. Although a lower predominance of the juridic sphere and the earlier centuries over the other semantic fields and the Hellenistic period would have been desirable, again the dialectological approach and the typology and chronology of the sources force however to overlook this disproportion.

Overall, due to its high technical level, the volume is addressed mainly to specialist readers: linguists, jurists, historians, specifically epigraphists. For them, however, this book represents definitely an invaluable tool, which efficiently brings together all the previous scattered bibliography, becoming so the new indispensable reference point on the subject.