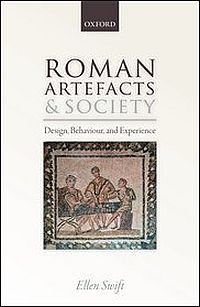 Too many of the artefacts with which Classicists work lack provenience. But privileging archaeological context can also mean privileging where an artefact died over and above how it lived. In Roman Artefacts and Society. Design, Behaviour, and Experience, Ellen Swift resuscitates the everyday objects she deals with, identifying the features of their design (their 'affordances') that have people interact with them in specific contexts, and pitting these against evidence of their actual use, evidence gleaned both from signs of wear and from their wider impact. This two-pronged approach is critical, for as Swift reminds us, the same object can have multiple functions, many of them unintended by its makers, and hard to predict by scholars today. Needless to say, there are limits to these functions: a stork cannot eat soup from a plate anymore than a fox can eat from a narrow-necked vessel. But there is also often unseen potential, which is only realised when an object is in the hand, of the moment. Swift's book is about this handling (the object's dimensions, its weight, texture, even taste) and relies to a large extent on her own handling of many of the examples in museums. In the process, the inadequacy of existing data in archaeological publications is revealed, their mode of description exposed as a way of seeing, when what one seeks is multi-sensory experience.

Swift's project is part of a sustained effort by archaeologists to ride the wave of the 'material turn' and of the splash made by psychologists (e.g. James Gibson) and social anthropologists (e.g. Alfred Gell) in order to move beyond representational readings of objects which have them stand, if not for people, then for identities and memories, and assert the agency of these objects to affect their users and society. The activeness of these objects' relationship with people embraces theories of phenomenology and embodiment. It also reveals new aspects of social practice. When objects take the lead, they can bridge across otherwise unbridgeable chasms (between elites and non-elites, centre and periphery) to reconstruct mentalités from behaviour, as opposed to behaviour from mentalités pulled from performative literary sources.

Roman archaeologists have proven particular adept at such methodologies (see e.g. Astrid Van Oyen and Martin Pitts' Materialising Roman Histories (2017), in which Swift has a chapter). In her book, she covers spoons, ring-keys, finger rings, pens, shears, dice and square-sided glass bottles, with, where the genre allows it, a focus on Romano-British material. Rather than let genre be the primary organising factor, she divides her discussion into thematic chapters: 'Function', 'Behaviour/Experience', 'Users', and 'Production and Users', plus introduction and conclusion. Diagrams, tables and appendices free her up to combine command of large datasets with deeper discussion of typical or anomalous examples. She is keen to emphasise the features that constrain, even exclude, users, as well as those that encourage and enable, and to highlight the differences between intended and actual use, differences that change objects and the cultures in which they operate. Change over time trumps place: although attention is drawn to local variations, this book is concerned with the reproduction of practices and assumptions across the empire.

The results are full of fascinating insights. It turns out that even some of the most ornate forms of ring-key, from the third and fourth centuries CE, forms often considered too ornate to be anything other than decorative, were still functional; and that there was more scope for cheating in non-elite dice-games played with examples that might be more easily weighted than expensive counterparts of translucent amber or transparent rock crystal, and, not only that, but that different shapes and materials changed the throw and the roll, and thus the excitement of the exercise. More pervasively still, spoons, tools, even brooches are found to be designed for right-handed users, reinforcing a prejudice against left-handedness in textual sources. And the inner diameter of finger rings strongly suggests that phallus rings were worn by children, as indeed were those with palm branches, theatre masks, Serapis motifs and Cupid and butterfly, and that those decorated with Venus were worn by women, those with Jupiter and the emperor by men, and - surprisingly - those with Mars by adolescent males (or females?). Swift acknowledges that 'more data are needed'. But her findings might be put next to rings found on or with skeletons at Herculaneum to allow analysis by age and gender.

Swift's findings on Cupid and the butterfly also ask to be brought into dialogue with the work of Verity Platt, whose 2007 article, 'Burning Butterflies: Seals, Symbols and the Soul in Antiquity', sees the popular ancient-gem-motif as accessing a 'sophisticated network of correspondences relating to philosophical doctrine, religious belief and ancient magic'. That this article is not in Swift's bibliography raises the question of how far her work speaks to readers beyond Archaeology. So too her discussion of the fifth-century CE manuscript known as the Roman Vergil, where she uses archaeological evidence for pens with oblique nibs to suggest that the investment of labour in the manuscript's production and the expertise needed by the scribe were not as great as has been previously assumed (that it was a change of nib and not changes in pen-angle that created its Roman Rustic capitals). Such an incursion into the 'materiality of writing' promises much. But it surely makes a difference to any conclusion about the manuscript's prestige that it was illustrated, even if (if not especially because) its illustrations are flatter and less illusionistic than equivalents in the Vatican Vergil.

If these 'omissions', if we can call them that, reveal anything, it may simply be that my own area of expertise is not archaeology but art history. But they are symptomatic of a book that, perhaps inescapably, given what it does accomplish, gestures to, but does not quite reach the cultural historical terrain on which it could make most impact. Although the work of papyrologist Raffaella Cribiore is cited with regard to the pens from Egypt, and Jerry Toner on Roman popular culture alluded to in the discussion of gaming, the implications of Swift's study for a history of writing, or of risk (e.g. Esther Eidinow's work, again not in the bibliography) are insufficiently cashed out. Mention of Eidinow also leads us to studies of ancient religion, in particular those that focus on the material culture that shaped 'practices, expressions and interactions' and on religious experience as 'manifested internally and externally through the concept of embodiment' (Anna Collar on Rubina Raja and Jörg Rüpke (ed.) A Companion to the Archaeology of Religion in the Ancient World, 2015). And then there is the raft of work on the senses that has come out latterly (e.g. Eleanor Betts (ed.) Senses of the Empire: Multisensory Approaches to Roman Culture, and Kelli Rudolph (ed.) Taste and the Ancient Senses, both 2017) with their chapters by archaeologists, historians, and in the case of the latter, literature specialists and philosophers. Only if Swift is read by these, will she enjoy the influence she deserves on Roman social history. The worry is that her language of 'affordances' and 'system function' speaks only to the converted.