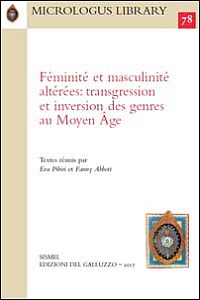 The editors have saddled this collection with an inappropriate subtitle (the contributions are not all medieval), and incomprehensible English abstracts. They have neither imposed consistency on (such as a uniform use of "illustrations" or "figures" or "plates") nor organized the essays. They have included essays that never address masculinity, femininity, gender inversion, or gender transgression, including Mohammed Hocine Benkheira's study of Islamic jurists' (condemnatory) views on anal intercourse, and Jean Wirth's argument that depictions of Mary Magdalen and / or John the Evangelist as the intended spouses at Cana visually reinforced canon law's justification for breaking off marriage rites prior to consummation. Finally, their preface misleadingly claims that the contributions "témoignent de permanences dans l'attribution de caractéristiques genrées, quelle que soit l'époque envisagée" (xiii) when (to the contrary) many recognize the historical fluidity and complexity of gender.

The political essays fall most in line with the prefatory claim concerning the tenor of the collection. Giuseppina Lenzo's survey of the eleven queens who either served as regents, or ruled as pharaohs (sometimes jointly with a male), or both, between c. 2950 and 1186 BCE clearly demonstrates that political power was rarely gendered female in ancient Egypt. Daniel Maira studies texts directed against Henry III of France and his mother Catherine de Medici, both of whom died in 1589. Of particular interest among the various texts to rage against effeminate men (such as Henry) and virile women (such Catherine) is the 1551 La louenge des femmes, containing the first use of the French term "misogyne." Maira's analysis of the anti-Valois discourse in these texts unquestionably shows that their authors identified proper political authority as virile and masculine, and saw feminine "softening" as a dangerous perversion. The significance of this discursive regime is to some extent called into question by Fanny Cosandey's analysis of sixteenth- through eighteenth-century French court ceremonial. Ceremony was governed by gender-hierarchical rules, such as the principle that wives participated in processions and other events according to the rank of their husbands. It is, however, worth underlining that the court, and therefore French royal power, could not be imagined without its female side; the women of the court were present at everything from baptisms, through lits de justice, to meetings of the estates, such that "l'élement féminin est bien moins écarté des positions de puissance que ne laisse entendre une littérature politique prompte à valoriser l'autorité masculine" (321).

The Micrologus series deals with "Nature, Sciences, and Medieval Societies," yet only a handful of the essays approach gender from a corporeal perspective. All contradict the purported thrust of the collection. Danielle Jacquart discusses ancient and medieval physiological treatises, all of which recognized (and attempted to explain the generation of) "anomalies" (not incidentally showing that more scientific attention was paid to "virile women" than to "effeminate men"). Similarly, Laurent Kondratuk's romp through centuries of (predominately legal) texts indicates that the existence of hermaphrodites, eunuchs, and other anatomically ambiguous individuals consistently complicated any simplistically binary approach to bodily gender (although there are hints in his essay that the category most challenged by such individuals was not "man" or "woman," but rather "human"). George Sidéris explores Byzantine "eunucité" as a mode of being analogous to masculinity and femininity, with a focus on the question of sexual desire. The Byzantine medical and political establishments were united in their insistence that eunuchs were not subject to sexual desire, but Sidéris calls attention to a minority viewpoint that post-pubescent castrates could experience desire, remaining permanently masculine despite their corporeal alteration; nevertheless, this view (developed by Basil of Ancyra to delegitimize his rival Leontius of Antioch, who was a eunuch) did not significantly challenge the hegemony of "trisexuation" in Byzantium.

Two of the essays focus on literary texts. Christopher Fletcher takes off from a confrontation between a monk and the protagonist narrated in the History of William Marshall to challenge the orthodoxy that multiple competing masculinities (clerical and warrior, for instance) characterized medieval Europe. He suggests, instead, that there was (conceptually speaking) only one type of "man," who possessed traits such as physical courage. Given how recent work on "clerical masculinity" has shown that medieval European priests scarcely embraced limitations on their ability to engage in violence or sex [1], Fletcher's suggestion should be seriously considered. However, the other literary contribution could not be farther removed from a homogenous notion of gender identity. Danièle James-Raoul takes on Heldris of Cornwall's Roman de Silence, about a girl who lives as a boy in order to circumvent a law depriving daughters of inheritance rights. James-Raoul makes a series of observations about the text that point to a conception of gender identity as socially constructed ("le genre est en effet une question d'us et d'usages, donc d'éducation, d'apprentissage" [331]). The sole extant manuscripts witness is spectacularly playful, as it (among other things) consistently utilizes masculine pronouns, adjectives, and participles for a protagonist whose name ("Silence") is grammatically neuter, while calligraphically foregrounding the letter "L" in all references to Silence, emphasizing how "elle" is in he ("li").

Two art historical essays spotlight the use of androgynous figures in visual culture. Anna Caiozzo considers a stylistic current in Seljuk art that rendered all human figures with the same gender-indeterminate facial features (the so-called "māhrū" or "moon face"). Frédérique Villemur explores the fusing of the ancient Greek male personification of Opportunity (Kairos) with the Renaissance female personification of Fortuna in Girolamo da Carpi's 1540s Occasio as an expression of the brevity and transience of opportune moments, signaled through the dynamic gender-equilibrium of the hybrid figure. A final art historical contribution weighs in on debates over ordained women and Christian liturgy. Ivan Foletti examines third- through seventh-century Marian imagery to trace the development of her iconography from a young, bare-headed or lightly-veiled girl to an older, heavily-veiled, and somewhat imposing matron wearing a liturgical (priestly or diaconal) stole and argues that this visual evidence of a Virgin with liturgical attributes corresponded to, and justified, Eucharistic altar service by consecrated Christian women (alongside other ecclesiastical roles). Due to a "lutte acharnée contre le clergé feminin" (60), this Marian imagery ceased (by the sixth or seventh century) to correspond to any real-world liturgical role for consecrated women, but was perpetuated by what Foletti calls the "naturellement conservatrice" (87) orientation of visual-arts ateliers. I would not be so quick to dismiss the persistent creation and circulation of a canonical image of a priestly woman as the result of mere inertia; indeed, it may well be that consecrated women served in liturgical capacities well into the Middle Ages. [2]

All in all, there is plenty of food for thought in this collection of well-researched essays.