Lucia Rainer: On the Threshold of Knowing 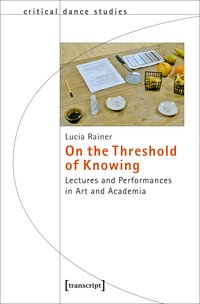 "On the Threshold of Knowing. Lectures and Performances in Art and Academia" is devoted to the examination of the concept of lecture performances, a hybrid form of research, lecture, visual arts, and performative narrative techniques. Despite its origins being traceable already to the 1960s and the emergence of performance as a new form of the arts, it has just recently been embraced also by other fields such as science or the humanities. Closely linked to the practice of artistic research, lecture performances, beyond transferring specific content, address key questions of the production and dissemination of knowledge in contemporary society. Its scholarly examination is still rather underdeveloped even though several publications [1] have approached the topic from a variety of angles. Rainer, who herself is situated both in the arts and academia, is among the first to address lecture performances in an in-depth study, which not only aims at providing a deeper understanding of the concept, but also the respective frames, i.e. academic lecture and artistic performance.

In doing so, Rainer faces several difficult issues as lecture performances, artistic research - in itself an ambiguous concept - and the issue of knowledge production are highly amorphous concepts that are negotiated with a variety of theoretical and practical approaches. Rainer addresses these issues by providing both theoretical contextualization as well as by analyzing concrete iterations of lecture performances. In her introduction, she states her goal as "the articulation of a field-comprehensive occurrence that is ingrained within an arrangement that can be termed as 'performing knowledge'", and in doing so exploring the "production of knowledge emerging from and originating in the relationality of field-bound frameworks and frames and intrinsic performances, i.e., originating in and emerging from cultural-historical and conceptual dimensions and manifestations." She seeks to "investigate the linkages, clashes, and confluences of staging knowledge as a site of crossing-over", however claims that "at the bottom of [her] study lies the observation of never arriving" (12-13).

The book starts with the theoretical embedment of several key aspects of lecture performances and examines key concepts of frame analysis such as Erving Goffman's, relevant to analyze how lectures or performances are structured with regard to their field-specificity. Moving on to a chapter on practice theories, she situates her study within Theodore Schatzki's perspective, i.e. the concept of practice as a social concept and emphasizes "that meaning making develops in and through praxis." (37) Ultimately, Rainer arrives at the concept of a praxeological frame analysis methodology, an approach that substantiates the idea that the social does not exist outside or apart from individually linked and collectively shared and organized practices. The author also presents different theories of knowledge production, stating that "knowledge can only be acquired, disseminated, and preserved in and through practice" (53) and that, vice versa, "the concept of practice relates to a knowledge formation process that is subject to the multi-facetted and unattainable dimensions embedded within the concept of knowledge per se." (54) Rainer hypothesizes that knowledge settings pervade scientific cultures and in fact diversify these culture's practices. She rightfully contends that knowledge is de facto engrained within research processes regardless of an artistic or academic framework.

Following a very short chapter on her methodological approach, which introduces video and audio analysis as additional methods to her theoretical concept of praxeological frame analysis, she moves on to a description of the concept of lecture performance. In this chapter, Rainer gives both an overview of the state of research as well as a historic embedment before citing examples of the concept, the challenges of which she rightfully identifies in its experimental, ambiguous, and ever-changing nature.

Subsequently, Rainer describes in detail her case studies, which she choses from the field of science - a lecture performance by experimental physics scientist Dr. Michael Vollmer and Vollmer's and Klaus-Peter Möllmann's academic performance "Making research experiential - fascinating phenomena observed though high-speed cameras" - as well as the arts - John Cage's "Lecture on Nothing" and Eszter Salamon's "Dance for Nothing." Her choice is smart in that in the case of scientific performance lectures the academic lecturer veers into the artistic practice whereas in the arts the artist assumes the position of the academic lecturer. In between the analysis of her second and third case study, Cage and Salamon, Rainer describes the concept of performance and its various iterations such as cultural or artistic forms of performance before moving on to her last case study, Vollmer and Möllmann.

In her final chapters, Rainer summarized her findings stating that the concept of lecture performance brings into focus "that the lecture frame does not [...] constitutes [sic] constraint. Instead, it offers an 'infrastructure' that can be employed, appropriated, supplemented, and displaced." (181) She identifies three overriding practices - voicing, transcription, and clarity-based alignment - that provide space for renegotiation of the circumstances under which knowledge is produced, disseminated and consumed in the lecture performance and applies them to the four case studies. Ultimately, the author concludes that lecture performances, beyond merely disseminating knowledge, rather link to making knowledge practical through documentary, interventionist and research-based approaches, thereby unhinging knowing from its acknowledged framework.

With her book, Rainer not only approaches a nascent phenomenon, the lecture performance, but also provides a reexamination of the established formats of lecture and performance, highlighting the increasing fluidity of the boundaries of art and academia, lecture and performance. This would become even more successful if the structure of the book would be a little more concise by tightening some of the chapters or introducing central claims such as the reason for the choice of case studies as well as the very interesting description and contextualization of the concept of lecture performance earlier in the text. This would not only facilitate understanding but also sensitize the reader to the difficulty of the task at hand.

Rainer's goals to contribute to the field by "contouring the concept of lecture performance" and to corroborate "the hypothesis that while the artistic or academic 'products' keep the two fields apart, their [...] practices, comprise similarities" testify to the importance of her study. She proves far-sightedness in tackling a concept that has not yet been inscribed into the history of art or science but touches upon various core areas of contemporary culture and its fields of study. Her theoretical research as well as her artistic background position her uniquely in the study of such a contemporary and interdisciplinary phenomenon as lecture performances. She successfully pleads in her final chapters that both the artistic and the academic lecture or performance can "take the opportunity to rethink the array of its own praxis and [...] challenge its 'products' as well as 'circumstances'" as they have been established for the respective field (204).