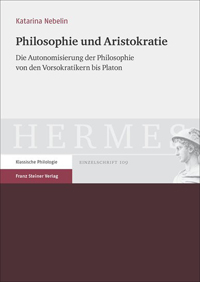 Katerina Nebelin's treatment is sociological in two respects. Social class relations are the background for the emergence of philosophy, as a separate identity within the dominant warrior nobility. In Pierre Bourdieu's sense, philosophy becomes a relatively-autonomous field with its own rules of the game, through a series of steps from the Pre-Socratics through the Sophists, to a final claim for autonomy and superiority by Plato.

The relative autonomy of philosophy from economic and political domination came about through a dynamic of internal conflict, that gradually gave rise to the concept of Truth-seeking as the sole criterion of social status. The private feuds of the proud warrior nobility were transformed into debates among speakers and texts. Literary specialists had long existed, but the Pre-Socratics attacked poets such as Homer and Hesiod, above all Heraclitus who found them superficial and misleading. A new social role began to develop, although some incipient philosophers (e.g. Parmenides) continued to write in poetry and claimed inspiration from the gods. The so-called "Seven Sages" were an early form, concerned chiefly with practical political reforms, and this concern would continue with diminishing emphasis, from Thales down through Democritus. Some were mantics, wonderworkers and preachers of salvation, like Pythagoras and Empedocles. Others displayed themselves as outsiders (Heraclitus, Anaxagoras). Poetry had been the popular medium, while philosophy would become identified with prose. But its initial venues overlapped with those of the poets: aristocratic drinking parties, tyrants' courts, and public events like the Panhellenic games.

New paths to wisdom were defended, eventually formulating explicit epistemologies. Inspiration from the Muses was criticized, in favor of direct experience, accumulation of teachings, and what would become logic. Among the most sensational claims was Parmenides' argument that change does not truly exist because reality is always the same. But Parmenides presented his case in a traditionalistic manner: in a poem that expresses his heaven-given vision, as a superior revelation. Parmenides' far-reaching influence was not in his doctrine but in laying out the rules of a new kind of argument, as quasi-syllogism, arguing from premises to conclusions. One begins with a convincing premise and examines what follows from it. Opposing positions are not merely to be denounced and denied, but disproven. The community of argument now takes on a distinctive boundary, as the criteria of logical argument enclose all positions in a common method.

Nebelin's emphasis on the growing autonomy of the philosophical field is in opposition to the older sociology of knowledge which saw the rise of Greek philosophy as a reflection of external political change, the rise of city-state democracy and political citizenship. Political argument does provide some concepts and terminology. Solon and other reformers argued that justice (personified as the goddess Dike) punishes humans with political catastrophe for their self-interested quarrels. Anaxagoras and others generalized the concept: law rules the cosmos. The nature-philosophies followed, arguing for various world-elements and processes that make up the universe. Heraclitus rose to a higher level of abstraction, arguing that the world is ceaseless conflict and change, but nevertheless is ruled by an all-encompassing logos. Parmenides countered with the opposite position, that change is illusion and all being is permanent. Now philosophy combined both its distinctive topics and its method of argument, removed from poetic stories and political practice. The autonomy of the intellectual field took shape.

The Pre-Socratics also began to create a distinctive philosophical ethics, as an alternative to the traditional aggressiveness of the nobility, and to the ideal of public participation. In response to the newly rich, the nobility had already begun to deny that wealth was a standard of eliteness. Philosophers radicalized this social aloofness, declaring that to be an observer is a higher standing that being one of the competitors for success. Seeking wisdom inside the philosophical field becomes the highest status, even above the nobility.

The generation of the Sophists brought a new level of meta-reflection upon the arguments of its predecessors. They completed the break with the old cultured style, no longer using poetry but only prose. Gorgias used Parmenides' syllogistic logic to produce opposing conclusions. The Sophists did not, as is often said, turn from nature-philosophy to social ethics, but continued to discuss metaphysics at a new level of epistemological acuteness. They recognized that signs/words are not the objects signified, and pointed to a necessary social construction of concepts in all knowledge. As Nebelin points out, Plato's attack on the Sophists has distorted the historical view of what they were and accomplished. It is not true that the Sophists were mere skeptics and paradoxers, and they held a variety of positions on metaphysics, epistemology, and social ethics. In many respects, they resemble 20th century analytical philosophers.

Above all, the Sophists created a new type of education. The traditional elite education was a combination of gymnastics, military training, and poetry. The Sophists offered education not for youths but for adults - in effect, creating higher education. To attract pupils, they made public displays of their arguing techniques. Plato and other conservatives derided them as mere money-seekers, no better than the commercial class, because they took fees from pupils. As wanderers from one city-state to another, they were rarely citizens (although they included some Athenians), and hence could not take part in politics. But they were not déclassé mercenaries; some were diplomats from their home cities; and they associated and often lived with the richest class. Nebelin shows that they were not a democratic faction, either; some favored democratic equality - even questioning slavery - while others held a variety of political views. They agreed that knowledge could be taught rather than innate; persons from all social classes could become students, and their skills in speaking and thinking would qualify them as the new elite.

Plato, as a self-conscious conservative and aristocrat, swung in the opposite direction, formulating a metaphysical epistemology in which all knowledge is innate, about ideal forms that constitute the reality of the world behind appearances (more than an echo of Parmenides). Plato also boasted that his own school (which legally took the form of a sacrificial cult) did not collect fees; but it too needed a material base, and although pupils were treated as disciples and comrades, they came from the wealthy classes and contributed to the school's material needs. It would be a model for the numerous schools founded by the generation of Socrates' pupils, and down through the Epicureans and Stoics two generations later. The most successful of the Sophists was Isokrates, himself another pupil of Socrates; he founded a school for teaching rhetoric, the model for schools of law and public speaking that dominated higher education throughout the Hellenistic and Roman periods. Although Plato polemicized that he alone sought Truth, Isokrates was no mercenary and no skeptic. He became a prosperous Athenian citizen, and made political speeches emphasizing the collective needs of the city-state, over the self-interests of power-seekers.

With Plato and his imitators, philosophy achieved a sharp boundary between itself and the affairs of the ordinary world. Pure intellectual life was extolled, but political life and public education were left for others. In Nebelin's account, we get a penetrating and realistic picture of how the half-dozen generations of Pre-Socratics and Sophists collectively generated this result.