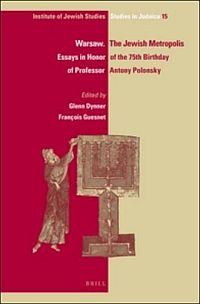 This excellent collection of essays pays a fitting tribute to Antony Polonsky who has been instrumental to the field of Polish-Jewish history for almost four decades as a teacher, scholar, and founding editor of POLIN: Studies in Polish Jewry. Moving from the earliest history of Jewish settlement in Warsaw in the fifteenth century to the 'anti-Zionist' campaign of 1968, the volume covers a vast range of material and interpretational problems much like Polonsky has done and continues to do in his scholarly work and as editor of POLIN.

The volume takes as its topic Warsaw as a Jewish metropolis. Throughout much of the 19th century, Warsaw had the largest Jewish settlement in the world, and in the decades before the Holocaust it ranked among the largest two or three communities in the world. The sheer size of the community all but ensured the tremendous diversity that characterized Warsaw's history as a Jewish metropolis, a city made up of Jews from many different parts of Poland and Europe and a city made up of Jews who identified with a wide range of different forms of being 'Jewish' (or not being Jewish) in the modern era: acculturation, Zionism, Jewish socialism, Diaspora nationalism, Hasidism, and so on. This diversity largely came to a violent and catastrophic end during the Holocaust when the Nazis transformed the geographic heart of the Jewish metropolis in the interwar years - the neighbourhood of Muranów - into a ghetto that held some 400,000 Jews. After the destruction of Polish Jewry during the Holocaust, Warsaw ceased to be a 'Jewish metropolis' as the rebuilding of Jewish life in postwar Poland shifted to the west of the country to the former German territories. Indeed, Muranów lay in total ruination in 1945, levelled to the ground by the Nazis after the Warsaw Ghetto Uprising.

This complex and dynamic history is analysed in twenty-four chapters that range from the economic history of the early modern Jewish mercantile elite to the cultural history of clothing decrees to the religious history of Warsaw's rabbis to the intellectual history of the city's Jewish historians during the interwar era. Students and established scholars wishing to conduct research on Warsaw's Jewish history will turn to this volume as an indispensable first source for some of the most recent research in the field. And, as one of Europe's most historically complex capitals, historians of modern European history will also profit from reading this volume to enrich their understanding of such diverse themes as nationalism, memory, violence, and religion. The one area somewhat surprisingly not given much coverage in this volume is the architectural and spatial history of Warsaw as a Jewish metropolis. While space does enter into a number of the chapters, and while the chapter by Karen Auerbach on residential life in post-1945 Warsaw provides an excellent overview of the postwar urban landscape, this area of urban history nevertheless receives less attention than it warrants.

The strength, however, of the volume lies above all in the historiographical interventions it makes into the fields of Jewish history in particular and modern East Central European in general. Scott Ury's chapter, for example, on a fin de siècle Jewish coffeehouse owned by Yehezkel Kotik addresses the complex issue of modern emancipation. The modern belief in emancipation, as Jürgen Habermas has emphasized, hinges on the creation of a public sphere in which all participants in a community accept the normative practice of rational deliberation to settle individual differences in the interests of all community members. Habermas identified the coffeehouse as one important forum for the creation of such a public sphere in which all have the right to contribute in a space that remains open and equal. Yet dialogue obviously ceases to be open and equal when an individual seeks to impose her views on another, as Ury shows, in his discussion of the reforms that Kotik advanced to mould his fellow Jews into 'respectable' and 'civil' members of Warsaw society. Kotik sought to shape Jews according to his own view of the modern world (225). In short, Ury explores one of the most substantial contradictions in modernity itself that will be of interest to historians of East Central Europe and beyond; namely, the contradiction between the egalitarian promise of the public sphere and its fragility amid attempts by 'reformers' such as Kotik to mould society according to their own ideological views.

The intense political diversity that Moss captures so richly came to a tragic end in the Holocaust. Perhaps a recovery of Warsaw as the centre of post-1945 Polish Jewry could have happened. But, as David Engel argues, the available documentary evidence suggests that the emerging Polish Communist regime 'wished from the outset to hold the Jewish population of Warsaw to a minimum' by encouraging Jews to settle in the western territories (567). Why would the regime have wanted to preclude the possibility of Warsaw becoming once again the centre of Jewish life in Poland? Engel speculates - compelling, to my mind - that the Communist regime desired to portray itself as 'authentically Polish' (569) and, thus, a significant presence of Jews in the capital would have complicated that aim. As a growing amount of research by East Central European historians now shows, the Communist regime embraced an ethno-cultural interpretation of the nation that marginalized Jews, among other ethno-cultural minorities.

In 1967/68, this embrace of ethno-cultural nationalism underpinned the regime's 'anti-Zionist' campaign that led some 13,000 Jews to leave Poland. Among those who left, Jan Gross, Irena Grudzińska, Aleksander Smolar and others founded the London-based journal Aneks. This journal, as Marci Shore reflects in an essay on the intellectual ramifications of March 1968, became a central forum for coming to terms with the failure of Marxism, a failure evident in the ethno-cultural nationalism of the regime, the bureaucratization of the party-state, and the antisemitism of 1967/68. Some of Poland's leading intellectuals, influenced by Leszek Kołakowski, developed new leftist commitments to individualism and pluralism as they critiqued the totalitarian movements of the twentieth century. They represented 'a generation of critique and a search for alternative values' (612). This search, Shore suggests, continued a 'rich tradition of Jewish learning in the Polish lands' that thrived in and outside Poland, despite and because of the regime's antisemitic campaign (ibidem). Like Moss, Shore suggests the richness of intellectual history to studying East European history, while also uncovering the complex aftermath of Poland's 1968.

This volume ends in 1968. Since those years, Poland has experienced searing debates about Polish Jewish history and, after 1989, has seen the revival of Jewish communal life in cities such as Warsaw. Perhaps this history will be told by a future volume also inspired by Polonsky's enduring work on Polish Jewish history.