Catherine M. Mooney: Clare of Assisi and the Thirteenth-Century Church 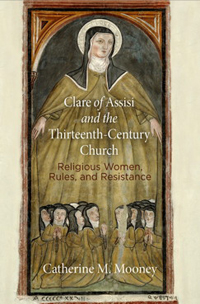 The present book offers close readings and new examinations of the sources connected to the celebrated female saint St. Clare of Assisi and to the foundation of the order of the Poor Clares in Assisi. Mooney suggests a radical interpretation of the sources arguing convincingly that in difference with the common scholarly assumption "St. Clare did not found the order of the Poor Clares; rather it was the order that found Clare." The book looks at texts related to St. Clare such as papal letters, the few existing letters written by Clare herself, as well as the canonization testimonies from the thirteenth through the twentieth century. Analyses of the textual sources written by St. Clare herself and the parallel examination of additional materials connected to her canonization and the establishment of the order in San Damiano provide a clear and comprehensive picture of the ways in which the legacy of St. Clare was established. The underlying assumption of this study is that one must opt for a rigorous and meticulous new reading of the sources in their manuscript form rather than rely on later editions and common interpretations. The book does not offer a new biography of the saint, but rather is an innovative chronology of the historical sources. Its major conclusion is that St. Clare was a religious leader striving to maintain the ideals of poverty and female monastic independence in the face of papal authority.

St. Clare of Assisi, who was born on July 16, 1194, and died on August 11, 1253, is known as one of the first followers of St. Francis of Assisi. Her parents intended her to marry a wealthy young man, but she chose a different path. According to Franciscan tradition, she was only eighteen years old when Francis came to preach in the Church of San Giorgio in Assisi. She was deeply moved by his sermon and begged him to help her follow a religious calling. On Palm Sunday, she attended High Mass at the cathedral. When the others pressed forward to receive a palm branch, she remained in her place, and all eyes were upon her as the bishop of Assisi descended from the sanctuary and placed a branch in her hand. On that same night, March 20, 1212, she left her father's house in secret and fled to the Chapel of the Porziuncula, where she met with Francis and his disciples. She laid aside her rich dress, and Francis cut off her hair and clothed her in a rough tunic and a thick veil. Francis placed Clare with the Benedictine nuns of San Paolo. Her father, who was furious at her secret flight, tried to bring her home by force, but she resisted and he was finally forced to leave her in peace. Francis led Clare, her sister, and several other female followers to the Chapel of San Damiano, located outside the town, where they established the first community of the Order of the Poor Ladies. San Damiano emerged as the most important house in the order, known for its radically austere lifestyle; Clare was its undisputed leader until her death some forty years later.

St. Clare has been the subjects of several important studies. In the works of Carolyn Bynum, she is portrayed as an example of the medieval ascetic virgin characterized by physical ills and food deprivation. [1] Bynum explores St. Clare's relationship to food and her special devotion to the Eucharist. In fact, St. Clare is associated with food on two different levels. One the one hand, her renunciation of food represents her devotion to the Eucharist and self-sacrifice, and on the other hand, she is said to have performed miracles associated with nourishment. Joan Mueller has analyzed the works of St. Clare and undertaken a close reading of her letters to St. Agnes of Prague, a Bohemian princess whose life was devoted to acts of charity, in order to elucidate the women's struggle to maintain their commitment to poverty within their respective religious communities. [2] Leslie Knox charts the evolution of the cult of St. Clare in the historical and literary tradition that spans from the thirteenth to the fifteenth century. Knox examines the rediscovery of St. Clare by both friars and nuns within the context of gender politics. She argues that various sources - including St.Clare's own writings and those within the hagiographic tradition - were used to reconstruct the saint's image. [3]

In an earlier publication, Catherine Mooney offered a fresh approach to the study of St. Clare by reading the commentary of men who wrote about her and St. Francis. The concept of imitation, she argued, was central to understanding the image of St. Clare; for example, she is the subject of special attention as an Altera Maria in an attempt to create a female model saint that is distinct from St. Francis, who is the Alter Christus. Mooney suggested that medieval and modern commentators have previously considered St. Clare in specifically female categories in order to distinguish her sanctity from that of St. Francis. [4]

The Introduction offers a literature review of the scholarship concerning g St. Clare and the Order of the Poor Clares in San Damiano. Next, the Introduction traces the book's principal assumptions and methodology. Chapter One looks at the earlier sources regarding Clare's childhood and youth and attempts to distinguish facts from hagiographic fiction. It also addresses the figure of Francis and his importance in establishing the legacy of Clare. Chapter Two explores the role of Clare in the religious community of San Damiano (1211-1216). Special attention is given to the rule that Francis gave to Clare, to the friars' relations with the nuns and to the early literary sources such as the letter of Jacques de Vitry (1216). Chapter Three describes the development of the community of San Damiano from being a house of penitents to a monastery (1211-1228). This chapter pays special attention to reviewing the scholarship on Clare. It reveals the centrality of papal authority in regulating and subjecting the community of San Damiano to papal supervision. Chapter Four continues to examine the development of San Damiano versus the papacy (1226-1230). It especially highlights the major role of Pope Gregory IX after the death of Francis. Chapter Five, which is particularly fascinating, deals with the earlier letters that Clare wrote to Agnes of Prague, offering a fresh reading of the instructions and guidance that Clare gave to Agnes. Chapter Six discusses further developments in the controversies between Clare and the papacy in the years 1230-1240 and the further complications between the nuns' aspirations for independence and the papal claim for close supervision. Chapter Seven examines Pope Innocent IV's contribution when offering the Clarissan nuns a new rule closer to their aspirations. It concludes with an explanation of the failure of this attempt. Chapter Eight shows further developments as expressed in the new rule of 1253 and suggests a balance between the nuns' demands and papal authority. Chapter Nine focuses on the later sources documenting Clare's final years and highlights her continuous efforts for establishing an independent order embracing the ideal of poverty.

Another major contribution of Mooney's book is the discussion of the myth that Clare is the first woman to write a religious rule for women. The rule, approved by the papacy on the eve of Clare's death, emphasized the importance of the order's commitment to material poverty and explicitly stated that the sisters were as much a part of the Franciscan family as the friars. According to Mooney, Clare is not the sole author of this rule that was, instead, written in collaboration with her sisters, and a few male supporters.

On the whole, the book is impressive in the breadth of its scholarship, in the various lenses it engages to examine the textual and political aspects of the primary sources, and in its evaluation of Clare's impact on the lives of the Poor Clares and on the thirteenth century church. The book highlights Clare's special status as a religious leader who worked to secure her ideals of poverty and the independence of her religious sisters in the face of papal oppression. All in all, this book offers us a rich picture of the centrality of Clare as a unique voice in the context of the growing doctrine of papal supremacy in the High Middle Ages.

[2] Joan Mueller: The Privilege of Poverty: Clare of Assisi, Agnes of Prague and the Struggle for a Franciscan Rule for Women, Philadelphia 2006; Joan Mueller (ed.): A Companion to Clare of Assisi: Life, Writings and Spirituality, Leiden 2010.