Oren J. Margolis: The politics of culture in Quattrocento Europe 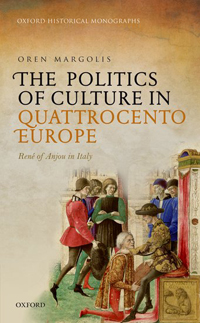 Oren Margolis's interesting and rich study focuses on the cultural politics of King René of Anjou, Italy, in the years 1435-1465. Based on the author's Ph.D. dissertation, the book is part of the Oxford Historical Monographs series, which publishes distinguished doctoral theses submitted to the University of Oxford. René of Anjou (1409-1480), also known as René I of Naples or the Good King, was a colorful monarch, distinguished by his cultural interests. He had not yet been the subject of much serious study, and Margolis's book is among the first attempts to evaluate his place in the culture and politics of Renaissance Italy. The author looks at René through the lens of diplomatic history, as he charts the cultural network in which this king acted in the context of Quattrocento Europe.

The Introduction reviews the state of research regarding René, who, owing to his political failures, has generally been ignored by scholars. Challenging this negative overview of his rule, Margolis suggests that one should consider his success in establishing a rich network of supporters and followers among the higher echelons of the Italian aristocracy, which was grounded in diplomatic interests as well as in cultural and literary exchanges.

Chapter 1, The Angevin Network in Italy: First Shoots and Early Life, presents a concise biography of the king and shows how he used his diplomatic skills to create his network. René was born on January 16, 1409, in the Angers castle, the second son of Duke Louis II of Anjou, King of Sicily. Margolis describes the establishment of the Angevin rule over Naples and the complicated succession history that finally led to René being crowned. He reviews the political developments in other cities and dynasties in Italy, including the Florentine parties and the Visconti and Sforza in Milan, as well as the way in which René skillfully used these power struggles to strengthen his rule over Naples.

Chapter 2, Janus Pannonius and the Politics of Humanist Literature, examines humanist texts, in particular Latin orations focusing on the Carmen pro pacanda Italia written by Janus Pannonius (1434-1472), who was a Latinist, a poet, and a diplomat. Considered the most significant Renaissance poet in the Kingdom of Hungary, Pannonius was a celebrated humanist. He arrived in Italy in 1447 and attended the School of Guarino da Verona in Ferrara and later the University of Padua. He returned to Hungary in 1458 and became the Bishop of Pécs and later Vice-Chancellor of Hungary. Pannonius was an influential intellectual and maintained connections with some of the leading philosophers of his time. He also amassed a significant library of humanist works (probably dispersed in 1526). Margolis skillfully charts the patronage and cultural network of this celebrated poet in connection with the prominent Venetian Jacopo Antonio Marcello.

Chapter 3, Art, Politics, and Patronage: Illuminating the Renaissance Book, deals with the illuminated manuscripts attributed, respectively, to the painters Giovanni Bellini and Andrea Mantegna, that René commissioned through Marcello in an effort to strengthen their cultural alliance: the Life of St. Maurice, which Marcello sent in 1453 and Guarino of Verona's translation of Strabo's Geography in 1459. Margolis analyzes the pictorial language used in these works of art as a symbol of René's cultural interests in chivalric values, humanism, geography, and cartography. The author provides a detailed survey of these manuscripts focusing on their sophisticated visual symbolism and the role that they played in the development of René's cultural diplomacy. It is to be regretted that the manuscripts are not reproduced in full color images but are shown only in partial and modest black-and-white reproductions. That being the case, readers cannot study the illuminated books themselves but must rely on the verbal descriptions.

Chapter 4, The Network in Action, returns to politics and diplomacy and looks at the way that the Angevin network functioned. It follows Angevin's decline after the military campaign of 1453-1454, which was concluded with the Peace of Lodi in 1454, a treaty that marked the end of René's reign in Italy and Angevin's loss of Naples.

Margolis's engaging book will interest a wide range of scholars as it skillfully blends diplomacy and cultural history with a close study of artworks and humanist texts.

René of Anjou was considered a failure both by his contemporaries and by future authors and modern historians. Even William Shakespeare had ridiculed him calling him Reignier where his poverty as a king is satirized. Margolis's book regains some dignity to this mistreated monarch showing his importance and impact on his period and on later generations. René appears as a sophisticated ruler who wisely recruited his cultural interests and his scholarly pursuits for political ends. He is highly evaluated for his abilities in constructing a useful network of clients and patrons advocating his rule and building up his political power.