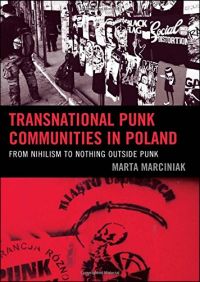 Marta Marciniak's book provides an interesting contribution to the cultural history of Eastern Europe by exploring how the development of Polish punk culture was situated in the broader context of the global 1980s and the cultural change accompanying Poland's transition to a post-communist system. This study is based on comprehensive fieldwork research which includes both interviews with members of punk 'crews' and an analysis of a broad selection of materials produced by punk culture. The author tracks both the rise and change of Polish punk culture during the 1980s and 1990s and explores how members of this subculture shaped their identities upon information about punk in the West from available records and Polish music magazines. At the same time Marciniak shows how cultural meanings of being a punk were defined in the context of local politics and social currents in late state socialism and the early post-socialist era. As Marciniak notes in the introduction, with this book she intends to answer the question of 'how punk is at the same time a local and universal phenomenon: even though it builds on different configurations of social forces and existing opportunities, all punk communities share some basic traits' (XXI). In her discussion of the dichotomy between global and local elements in Polish punk culture, Marciniak also situates geographically bound crews in urban spaces through case-studies of punk crews from Warsaw and the Upper Silesia region. The author, who also has an experience with oral history methodology, also provides an interesting discussion on the use of oral history interviews by sharing her fieldwork experience.

One of the most interesting features of this book is that it covers the time both before and after the fall of communism in Poland. This move enables the author to grasp the continuity of the politics of a Polish punk culture which had to redefine itself after 1989. In the 1980s some circles of more politically inclined Polish punks, engaged in the anarchists movement, primarily defined communist party elites as their enemies, but as Marciniak shows, Polish anarchists also expressed their hostility towards the 'the moustache guys' from the Solidarity movement: they even held a series of demonstrations against Lech Wałęsa in the late 1980s (86-89). After 1989 Polish anarchists had to reformulate their identity, and channeled their protest against the right wing politicians and the Catholic Church which actively influenced the public sphere in the early 1990s. At the same time, they also defined the spreading skinhead subculture and extreme right wing political activists as their main enemies.

This book succeeds in showing what the punk culture can tell about Polish culture during the post-communist transition. It insightfully investigates how young people defined their own community by challenging dominant cultural values in the context of the political and social turmoil of the 1980s and how they redefined their community, as well as their enemies, after the change of 1989.

However, it is necessary to mention an important drawback of this volume, id est the lack of references to the theoretical framework. The introductory section includes only a brief and rather superficial discussion of how this case study refers to recent scholarship of subculture studies grounded in the tradition of British culturals studies (XV-XVI). Recently the authors of a study about Russian skinheads [1], which is well grounded in subculture studies, showed how such a theoretical framework helps to understand the politics of a subculture in post-communist Eastern Europe.

The second drawback is the lack of context about the social background of particular punk groups. This is particularly visible when the author discusses punk crews in the mining region of Upper Silesia. Aside from a broad introduction which informs the reader that punks were living in mining towns, there is no exploration into how both living in a post-industrial region with a steadily increasing rate of unemployment and their working class social background influenced their cultural capital and subcultural careers. The topic of post-industrial urban culture has been extensively discussed by several British scholars from the field of subculture studies, for instance by Sarah Thornton [2], who used such case studies to provide an insightful analysis of broader currents in British society. My impression is that a book about Polish punk culture could benefit from situating this case study in such a discussion.

Despite such drawbacks Marciniak provides a comprehensive picture of Polish subcultures during the transition from communism. She definitely succeeds in showing what it meant to be a punk for a Polish adolescent during the transition by challenging cultural symbols. For me, a Pole with an experience in studying Polish subcultures, such symbols, cultural icons and subcultural jargon are familiar, but my impression is that it could eventually discourage a foreign reader who is not particularly familiar with such topics. To summarize, this book is definitely an important contribution to contemporary Eastern European cultural history since it shows how during the last years of state socialism the Polish youth not only appropriated a cultural trend from Western Europe but also inscribed it with local cultural and political symbols. It is particularly important to praise this book since books published in English about Polish contemporary cultural history are definitely scarce.