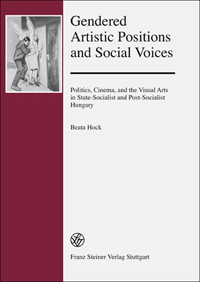 The title Gendered Artistic Positions and Social Voices. Politics, Cinema, and the Visual Arts in State-Socialist and Post-Socialist Hungary clearly reveals the author's intentions. While referring to the sociology of art, among other disciplines of the humanities, Beata Hock explores how the gender issue became included in the field of cultural production in state-socialist and post-socialist Hungary. The gender issue in the cultural and political context of post-1989 Hungary has previously been presented to English-speaking scholarship on East European studies in Lynne Haney's essay in the highly acclaimed volume, Uncertain Transition. [1] Hock's book discusses this issue within the context of both the field of visual arts and that of cinematography. This study explores two interdependent themes, policies towards women in the post-war Hungary and the representation of gender topics in the visual arts and the cinema. It is worth emphasizing that the author clearly demonstrates the interdependencies between the politics of female-representation on the movie screen and in the visual arts on the one hand and the presence of females in the Hungarian cultural industries on the other: artists, art critics, and, in the case of cinematography, other behind the screen jobs. Hock also explores the broader perspective and shows how the gender issue became present in post-war Hungarian state politics and media discourse. She further discusses how this issue was situated within the wider perspective of the global development of post-war feminist movements, thereby avoiding a narrow national narrative, a constant problem in East European historiography.

This volume, less than 300 pages long, covers a very broad field of study, with the author discussing both the visual arts and cinematography in Hungary from 1945 to the present day. She discusses the issue of female participation in the two artistic fields as artists, art critics or, in the case of the movie industry, in one of the several roles in the production process, such as set directors and script writers. Furthermore she also focuses on the issue of the "self-representation" of female bodies and on gender subjects in artistic practices, demonstrating how such representations differed between both visual arts and movies made by men and women. It is inevitable that a discussion of such a broad subject should discuss several important issues very briefly or in a simplified manner. Moreover, almost one third of the book is dedicated to a discussion of several different theoretical approaches to gender studies in contemporary sociology and art theory. While reading this volume I was often eager to learn more about the societal and political context of a particular issue during a specific time period. This book requires an extensive knowledge of Hungarian political, cultural and social history and a reader who lacks such knowledge would be left with many questions unanswered. The most interesting chapter is Part II: "Emancipation: An expendable political goal" which explores how Hungarian state agencies frame gender issues in their policies. However, as far as I understood, this chapter is based primarily on a reading of secondary sources, and not on archival research which would substantially enrich a study of state policies.

From the first page the book includes frequent references to numerous concepts derived primarily from the fields of feminist studies and art theory. The reader could become confused with the number of different theoretical approaches and key concepts. Instead of providing clear references to the particular concepts used in the book, the introductory chapter works more like an essay in which the author demonstrates their familiarity with recent trends in contemporary humanities. Despite this introduction to certain key concepts, the book could still be a difficult read for those unfamiliar with such approaches and academic jargon. Hock is openly sympathetic to those who fought against the oppressiveness of patriarchal hierarchies, and the book therefore belongs to the genre of heroic narrative in which political dissidents are replaced by females struggling with the male-dominated cultural industries of a state socialist state. Such an approach could mean that scholars who believe in sine ira et studio principle may be discouraged while reading this book.

To summarize, this volume provides an interesting insight into the gender issue in post-war Eastern Europe and clearly succeeds in situating a particular case-study within a broader international context. Hock provides a series of theoretical frameworks which help the reader to understand numerous political factors, such as the participation of females in political elites, their political capital, and the rhetoric towards gender equality shaping the gender issue under state-socialism. She also succeeds in showing the complex field of cultural production which lies behind the representation of gender issues in the arts, thereby certainly avoiding a shallow study of the representation of one particular topic in the arts. As she concludes, an analysis of the "self-representation" of gender related themes in artistic practices and of the participation of women in socialist "cultural industries" helps the reader to grasp the complex cultural construction of feminitity in state socialist Hungary. By placing such "socialist feminity" within the broader context of international currents, such as the rise of the feminist movement and the sexual emancipation in the 1960s, Hock provides a study which sheds new light on the ways in which the politics of state socialism influenced cultural construction of gender. However, in order to fully appreciate this study, a reader is required to be familiar both with contemporary trends in gender studies and with Hungarian post-war history.

[1] Lynne Haney: "But We Are Still Mothers". Gender, the State, and the Construction of Need in Postsocialist Hungary, in: Michael Burawoy / Katherine Verdery (eds.): Uncertain Transition. Ethnographies of Change in the Postsocialist World, Lanham/MD et al. 1999, 151-168.