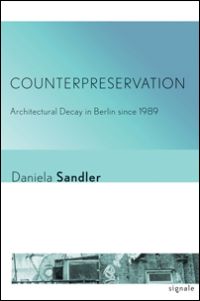 Daniela Sandler's book, Counterpreservation: Architectural Decay in Berlin since 1989, raises the following intriguing proposition: there is a form of architectural intervention that embraces decay as an aesthetic and a social activist practice, that is tied to squatting and architectural preservation movements of the 1970s and 80s, yet distinct from both. This form of intervention, which Sandler gives the provocative name of "Counterpreservation," is characterized neither by a desire to refurbish buildings, returning them to an earlier, supposedly more authentic state, nor by an impulse towards destruction. Rather, Counterpreservation as Sandler describes it is a phenomenon that describes buildings that are carefully allowed to disintegrate but not to the point of inhabitability. The artists, activists, and architects Sandler associates with the phenomenon embrace architectural change and evolution. Some, she argues, welcome their buildings' deterioration because they want to remind passersby of the history of the urban landscape they and the structures inhabit, while for others, weathered façades communicate resistance to gentrification. Counterpreservation is in this way "not so much a specific model for the treatment of buildings as it is a critical way of thinking about history and the city" (41). It is furthermore, argues Sandler, an ongoing practice, "open-ended, [and] ambiguous" (32).

Sandler's book explores counterpreservation in a particular context, that of Berlin between 1989 and around 2015. She argues that the conditions of post-Wende Berlin - of reconstruction, gentrification, unification - created a particularly fertile ground for counterpreservation initiatives. Her account unfolds in six chapters. In the first, she defines the concept, while the subsequent chapters explore particular case studies that illustrate it: the Hausprojekte Køpi, Tuntenhaus and KA86 (chapter 2), Haus Schwarzenberg in Berlin's Mitte district (chapter 3), the "MoUrning" memorial project proposed by architect Daniel Libeskind for Oranienburg (chapter 4), the Topography of Terror museum and documentation center at the former headquarters in Berlin of the Gestapo and SS (chapter 5), and "East German ruins," principally the Palace of the Republic (chapter 6).

In conceptualizing this particular approach to architectural intervention in post-1989, Sandler is to be commended for offering a fresh perspective within the crowded field of study on Berlin, memory, history, and architecture. However, although she raises a truly compelling framework through which to consider architecture, she ultimately does not fully explore its implications. This is mostly because the discussion of counterpreservation in the book is confined to the introduction, chapter 1 and the conclusion and as such kept rather more separate from discussions of the particular case studies than one would expect. One result of this arrangement is that it is not always clear how or why the specific examples discussed in chapters 2-6 are manifestations of counterpreservation (a term which appears surprisingly infrequently in these chapters) or how they relate to one another. Instead, the accounts of particular buildings, sites, and designs tend instead to focus more on the particular histories of each from 1989 as well as on their treatment in the press or in secondary literature. For example in chapter 4, Sandler provides a very thorough account of the history behind the plan to build a monument at the Sachsenhausen concentration camp in Oranienburg outside Berlin, of Libeskind's design for it, which was disqualified from the design competition although it received an honorable mention, and of the Brandenburg police academy barracks that were ultimately built on the site. The connections between Libeskind's design and counterpreservation are at times evident, as in the discussion on pages 150-58. However such connections are not discussed as extensively as one might hope, and the relationship of Libeskind's "MoUrning" project to examples from other chapters, such as activist housing projects like Tuntenhaus and KA86 is unclear. Ultimately, the difference between counterpreservation and squatting on the one hand or architectural preservation on the other remains ambiguous.

A more historically-grounded account of destruction, reconstruction, and preservation in Berlin would have helped give the concept of counterpreservation greater resonance. Of course, architectural ruins have symbolized different things at different times in Berlin's twentieth-century history. For example after 1945, the city's war-ravaged built landscape symbolized for many inside and outside Germany the destruction of the German nation at the hands of the Nazis. For urban planners these ruins represented an opportunity to build the city anew, correcting what were thought to have been the mistakes of nineteenth-century development under the Hobrecht plan. Thirty or so years later, the neglected, decaying nineteenth-century buildings in central Berlin meant something different again, and moreover had carried a significance in East Berlin that was distinct from that in West Berlin. Understanding the specific history of ruins and their symbolism in Berlin would have helped contextualize their changing significance in the post-1989 period that Sandler focuses on.

Nonetheless, Sandler's concept of counterpreservation has great potential as a concept for understanding how buildings' decay has been used to highlight the existential contingency of architecture, a means of framing a particular structure as well as the city in which it is located as sites of change and evolution. Counterpreservation could be a framework for understanding building as neither a beautiful and timeless object d'art nor a beautiful and timeless ruin. As Sandler notes, the concept "provides a way to incorporate a more dynamic view of history into the treatment of architecture and urban space," continuing, "It privileges change instead of any single specific moment or style" (31). Considering a building through the lens of counterpreservation could potentially help critics or historians see the way time and history have, but also have not, been addressed or incorporated in urban planning and architectural design, in part by foregrounding the extent to which timelessness is often the metric by which architectural success is determined.