Elizabeth Casteen: From She-Wolf to Martyr. The Reign and Disputed Reputation of Johanna I of Naples, Ithaca / London: Cornell University Press 2015 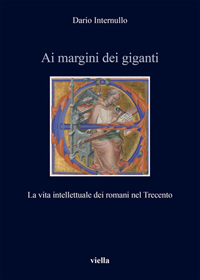 This is a masterwork of historical analysis, a sociology of learning and an exhaustively detailed chronicle of trecento Rome's textual communities. To create his "social history of Roman culture" (17), Internullo takes us on a "long and dense journey" (463). In five chapters he examines material and institutional structures (19-114), the prosopography of its intellectual classes (115-220), the reception of intellectual production, skillfully using marginalia to do so (221-88), the rhetorical / stylistic forms of production (289-382), and the impact of dictamen on textual production and Romans' creation of mythical genealogies as legitimizers of status and fama (383-462).

Internullo equates "culture" with verbal textuality (3-4), including epigraphy (238-42). The visual rarely emerges except as ancillary to text (as with Stefaneschi's poetic tituli for Giotto's Navicella or Rienzo's for his Senate Palace painting) and sometimes in archaeology (302). The aural - especially in light of recent work by Atkinson, De Caprio, Montuori, Morosini, and Senatore - remains underutilized (302, 446-47).

He also invites in many less-known Romans who composed, collected or transmitted contemporary learning or played a hand in the rediscovery and transmission of the ancients (Internullo's "giants"): cardinals and bishops, barons and lesser nobles, members of ecclesiastical and baronial familiae, senators, civic administrators and judges, lawyers, physicians, notaries, university professors and teachers of grammatica both individually and as class groupings.

Legal, medical, theological and philosophical texts, classically inspired histories, biographies, hagiographies and genealogies, poetry, chivalric and romance literature, and the art of dictamen form an intertextual corpus whose fragmentary survival only hints at the vibrancy of this civic production and cultural habitus.

Internullo deploys four methodologies: philological / codicological, historical-cultural (including social and prosopographic), linguistic, and history and sociology of the book. The net effect is a convincingly argued picture of Rome without Avignon that remained a vibrant center of cultural creation and exchange without loss of Bourdieu's "cultural capital" (43-46, 383-84). While individuals might have written and collected texts sparsely, Internullo makes the essential point that collectively these efforts formed a true textual community that absorbed and transmitted key cultural values for trecento Italy: Rome's legacy as the cradle of classical culture, as the intellectual heart of Christendom, and as the Urbs rooted in its ancient history but constantly renewed through the efforts of its citizens. These used their learning to provide collective memory, "legitimizing compilations" (307) and historical exempla for personal virtue and civic life.

He argues that trecento Rome was neither the intellectual and cultural backwater that scholars have long posited; nor that its intellectual production and textual communities were inferior or marginal to those of Tuscany and the North, as asserted by Malato, Asor Rosa or Witt (6-9, 365-66). He correctly sets aside two time-worn frames: the imperial-papal-communal triangulation (12) and the humanist, pre-humanist, and non-humanist hierarchy (7, 355-57). He properly expands Rome's intellectual classes to include its Jews (216-20, 329-31, 350-51) but finds no women to speak of. He concludes that trecento Rome's unique intellectual contribution was not its embrace of classical Latin literature but its creation of a Romanesco corpus that cut across class, occupational and linguistic divides (374-82, 473-74).

Ai margini dei giganti will become a standard reference work on Rome's trecento culture. In its careful accumulation of supporting detail, in its cogently argued portraits of intellectual classes and individuals, in its application of up-to-date methodologies and studies, Internullo's book constantly impresses the reader with its learning and driving force.

There remain some methodological issues. Internullo overlooks much useful research on other contemporary centers. Cultural life in trecento Naples, which he approaches repeatedly, is undergoing a thorough reevaluation by Internullo's colleagues at the Università "Federico II" that builds on Sabatini but deploys every methodology from philological and codicological research to the most current theoretical frames on readership, reception and textual communities to focus on such culture workers as notaries and administrators. He also makes scarce reference to recent work on textualities in the French-influenced Anglophone world or such directly relevant work as Alizah Holstein's.

Internullo makes excellent use of Carocci, Gennaro, Maire Vigueur, and Rehberg's Roman prosopographies. But could this information have followed the lead of such projects as Kohl's Rulers of Venice and be better offered in a searchable online database? This would allow readers themselves to construct these lives and classes and Internullo to present his considered conclusions, thus saving valuable print pages. Apropos, Internullo's book sometimes reads like a dissertation. It seems to include every piece of evidence discovered and every insight derived from that and secondary work. Better editing could have streamlined the narrative, better synthesized classes of information, and more cogently presented his conclusions. Even with all this data, Internullo admits that his samplings are small. All too often prosopography devolves into unique biography and case study.

This book thus sometimes gives the unintended impression that the higher the social class - largely because of the greater availability of records accompanying that status - the better and more important the works produced. Simultaneously, it reveals a constant, and sometimes anxious, ambiguity. For all Internullo's focus on the baronial class, the Anonimo Romano (184-90, 310-15 et passim) and Cola di Rienzo (passim) remain central to this book, the core around which all other analyses seem to revolve.

This reviewer was also brought up short by Internullo's assertion (118, 145 et passim) that charges of the Roman barons' brutality and violence no longer carry weight precisely because their families contained men of high culture and learning. The record of the twentieth century - as of the twenty-first's - is filled with highly intelligent, cultured men carrying out the most brutal and uncivilized acts against their "inferiors."

Unfortunately, cultural history remembers many of these trecento Romans only because of their relationship - for good or bad - to Petrarch and Cola di Rienzo, men of far lesser social and political status but of far greater talent and vision. Petrarch himself eventually rejected the Colonna and moved on. Cola di Rienzo was brutally murdered by them. When the popes returned from Avignon they coldly - and often violently - swept aside many of these old Roman families as obstacles to reform and renewal. That remains the fate of these obscure Romans of the trecento, fates that Internullo's book makes heroic effort to overcome.