Elizabeth Casteen: From She-Wolf to Martyr 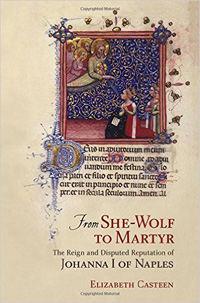 Casteen's monograph focuses on Queen Giovanna (Johanna) I of Naples (1343-1382), the granddaughter of King Robert the Wise, chosen by him as his sole heir. Giovanna was one of the longest ruling and the first female monarch of any fourteenth-century state. Her reign was marked by dynastic rivalry, murder, scandal and slander, usurpation, invasion and civil war, and by her final deposition and murder. Petrarch defamed her as corrupt and incompetent, Villani and Gravina as a "whore"; while Boccaccio praised her as "more renowned than any other woman of our time for lineage, power and character".

Giovanna has been the subject of dozens of biographies, poems, novels, stage and even television plays from Boccaccio through Tristano Caracciolo and Muratori to Alexandre Dumas' and Marjorie Bowen's gothic thrillers, to the Gleijeses' sex-obsessed biographies. Modern studies begin in the 1920s with Émile Leonard, who set the scholarly standard. In 2009 Mario Gaglione provided a solid chapter in Donne e potere a Napoli, while Nancy Goldstone's The Lady Queen offered a popular biography. Casteen has presented the first comprehensive study of the 21st century.

While she covers all the events and figures of Giovanna's reign, Casteen concentrates on the queen's "reputation". Her five chapters discuss the murder of Giovanna's first husband Andrew of Hungary and her subsequent infamia, her marriage to Louis of Taranto and "rehabilitation", her self "redefinition" as a model queen after Louis' death, her "performative" friendships with saintly women, the Great Schism and her death. The book concludes with a review of the queen's reputation in later historiography and Provençal legend and includes a lengthy bibliography. Casteen bases her account on an exhaustive reading of the primary sources: printed, manuscript and her new archival findings. She also uses secondary work broadly and effectively.

Casteen deploys two major theoretical frames. The first applies the well-established literature of regnant queenship as developed by Huneycutt, Earenfight, Duggan and others. This frame helps readers deconstruct the misogynistic (Casteen's "antifeminist") narratives of Villani, Gravina, Petrarch and others. She counterbalances these accounts with sound interpretation of archival records that show Giovanna as both active agent and skilled, if struggling, ruler. Casteen thus provides an important case-study of the repeated vilification of female rulers and the strategies medieval women employed to protect or reassert their agency and dignity in the face of misogyny, infamia, and brute physical force.

The second frame is the construction of identity and persona made popular by Stephen Greenblatt's Renaissance Self-Fashioning (1980). Beyond Greenblatt still lurks Jacob Burckhardt's chapters on "The Development of the Individual" in Civilization of the Renaissance in Italy, long questioned by medievalists. Greenblatt's theory has been applied to Neapolitan studies by Darleen Pryds (1994, 2000), Samantha Kelly (2003), Kathleen Fleck (2010) and several chapter authors in The Anjou Bible (2010). It has been deployed to posit the Angevin's deep sense of illegitimacy and their consequent attempts to fashion an image of piety (their beata stirps), chivalrous right to rule and royal wisdom.

The Angevins were hardly exceptional in this search for legitimacy, however. Every dynasty from the Merovingians and Hohenstaufen to the Valois and Plantagenets wore worried crowns. Nor did they share the American obsession with "self". Most medieval and early modern moral treatises, mirrors of princes, saints' lives or royal biographies address not fluid "personality" but what Boccaccio termed "character" (mores). As Kelly demonstrates at length for Robert the Wise, piety, largess and patronage, wisdom, prudence and learning, justice, governance and statecraft were all venerable medieval categories of biography that attempted to define internal character and external deed.

Casteen touches on issues of internal character implicitly throughout but without explicit analysis. Her reference to "character" in the introduction (20) is set within the context of external forces, such as reputation and slander, again making character less an internal attribute than an artificial and constantly shifting "construction" (25).

Despite Casteen's statement to the contrary (26), she repeatedly applies the tenets of self-fashioning to regal queenship in such a way as to make female agency seem a mere strategy of opportunity. Ignoring longstanding Christian hermeneutics of "interiority", Casteen instead argues that Giovanna's "self-presentation [...] constitutes a performance" (26). Yet Casteen fails to square these self-contradictory claims with her readings of the primary sources. These display little "performative" role-playing or motivation on Giovanna's part but reveal instead a deeply acculturated heritage of agency and rule.

"Renaissance self-fashioning" and "regnant queenship" are separately useful tools, but failure to analyze the limitations of combining them makes Casteen appear methodologically derivative or somehow constrained into accepting the arranged marriage without further reflection or critique. Her constant repetition of such words as "reputation", "reinvention" and "persona" (e.g., 186-195) convey a lack of conviction in their hermeneutical effectiveness in defining Giovanna's queenship.

When Casteen turns to Louis of Taranto (78-117 et passim), her discourse swerves to an externalized rhetoric of male agency without reference to constantly reconstructed "personality". She analyzes at length Louis' attempts to claim sole rule after his official coronation with Giovanna in 1352. In this regard she discusses Niccolò Acciaiuoli's campaign to bolster Louis's claims, including his commission of Louis' Statutes of the Order of the Knot (79-100 et passim). Yet Casteen oversimplifies the visual evidence as "unambiguous" in support of Louis (95) and overlooks another important text: British Library, MS Add 12228, Meliadus de Leonnois.

This Meliadus is a long (352 fols., double-column) Arthurian romance, similarly dated c.1352, by the same illuminator (Orimina), also commissioned by Acciaiuoli for Louis. It uses the verbal and visual to explicitly insert Louis into the fiction as Meliadus, the hero who exemplifies chivalric male kingship and rescues and rehabilitates a falsely accused queen.

While Casteen stresses the power of imagery in the Statutes, she reduces its complexity and fails to acknowledge that such artistic gambits also carried risk. How did contemporaries take the Statutes' fantasy projections of its knights' adventures? Did Louis and Acciaiuoli understand that Meliadus' association with the queen of Scotland ultimately led to the invasion and destruction of kingdoms? But Casteen fails to consider such questions and omits Boccaccio's mockery of Louis and Acciaiuoli's "risable" pretensions to chivalric "fatti" in both the Statutes and Meliadus. She also casts a reductive eye on Boccaccio's ultimately laudatory biography of Giovanna I in De mulieribus claris.

Apropos, Casteen has missed much important Italian work (e.g., C. De Caprio, F. Delle Donne, F. Montuori, A. Perriccioli Saggese, G. Vitale, M. Zabbia), as well as Nancy Black's Medieval Narratives of Accused Queens (2003). Where medieval writers lacked evidence of character and motivation, they could turn to such narratives to "fill in the gaps". But none of these narratives address "personality" or "self-fashioning". Instead, they deploy fable, romance and traditional Christian virtues and vices to underscore noble character, integrity under duress, and social and political agency. It appears likely that Boccaccio also borrowed from this genre for Giovanna's biography.

Ultimately Casteen's book demonstrates the shortcomings of current first-monograph publishing: exhaustive dissertation research based on innovative readings of sources and interpretive literature is turned into a "promotable" and "saleable" book by the imposition of theoretical frames that must be repeatedly - even relentlessly - recombined, often to the detriment of sound historical method and judgment and to the exclusion of contradictory evidence or complexity.

One comes away with the sense that Casteen has written two books, for two audiences in two directions: one about medieval Naples, another about medieval queenship. The reader looks forward to seeing which direction Casteen's mature research will take.