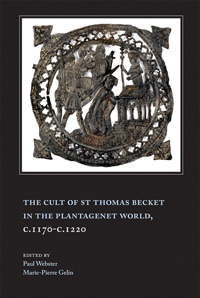 This volume is the fruit of a series of panels on aspects of the early cult of St Thomas Becket presented at the International Medieval Congress, Leeds, between 2006 and 2010. The long gestation period of the final work is reflected in the depth and breadth of research that many of the chapters evince, and the footnotes of this book alone could be heartily recommended as an invaluable bibliographical aid to all students of Becket and of the world in which his posthumous fame first flourished. Particularly useful in this sense is Paul Webster's opening 'historiographical pilgrimage' through recent literature on the cult, mainly as it developed in England, which proves in its richness his observation that no single volume could now hope to provide a full picture of the devotion to and influence of Becket in the later Middle Ages. There would be far worse places than this essay to point interested students at the start of their research.

The present work restricts itself to the first fifty years from the saint's martyrdom to his translation into the Trinity Chapel of Canterbury Cathedral. Recent studies on the early lives by Michael Staunton and the miracle collections by Rachel Koopmans, among others, have shed light on the creation and initial dissemination of the textual legend. Building on such foundations, this collection undertakes the task of revealing how that legend took root in the Plantagenet world along often-surprising pathways of affinity and tradition. Indeed, in a notable chapter Michael Staunton shows how the story of Becket's life and martyrdom was incorporated into, or problematized, the narratives of English chroniclers of the late-twelfth and early-thirteenth centuries, reflecting their allegiances and particular concerns.

Perhaps the best introduction to Becket's early cult until this point has been Anne Duggan's essay 'The Cult of St Thomas Becket in the Thirteenth Century' in the 1982 anniversary volume for St Thomas Cantilupe, which is accordingly cited as a starting-point for many of the contributors to this present volume. It is thus appropriate that she should provide the first substantive analytical chapter and introduces the key themes developed by the other authors: the potency of Becket's imagery; the transformative effect of Henry II's (genuine?) penitence and penance; and the centrality of the Plantagenet affinity to the rapid diffusion and long duration of the cult.

In many places to which the cult spread Becket not only took his place in the ranks of the martyrs, but became to an extent the martyr. At Canterbury the martyr-bishops Alphege and Dunstan provided an archetypal setting within which the monks of Christ Church could lay claim to custodianship of the latest murdered bishop. In her patronage of Becket devotions in Saxony, Henry II's daughter Matilda stood within a long tradition of English royal wives promoting Insular martyr-saints on the Continent, particularly St Oswald. It is worth noting that this was a widespread phenomenon, with Becket frequently being paired with other political martyrs in stained glass and reliquary caskets from Sicily to Norway. The association worked not only to place the new saint within a context of established local devotions, but also provided them with fresh impetus.

More than just a martyr, much of Becket's appeal lay in the myriad roles he could play. As a frequent sea-traveller he was petitioned as a protector from water. As a champion of Church against State, he was recalled during political crises, not least when Henry II's son John found himself in a similarly antagonistic position to the ecclesiastical hierarchy. His cult flourished at a time of growth for leper-houses and thus he patronised many. Having vanquished William the Lion following the penitential prayers of Henry II he arrived in Spain with a reputation as a 'winner of battles', and was invoked as such by Count Nuño Pérez de Lara while successfully besieging the Muslim city of Cuenca.

Several of the chapters respond to the apparent 'paradox' of Henry's kith and kin vigorously championing a saint who had brought the dynasty so low. Given that after 1174 the king himself was enthusiastically using Becket's memory for his own political and military ends this is fairly easily resolved. We see not only Mathilda of Saxony and Leonor of Castille (Henry's third daughter Joan of Sicily is mostly overlooked here) exercising their filial duties, but vassals and rehabilitated allies such as William the Lion of Scotland utilising Becket as a cipher for their loyalties.

Alyce A. Jordan's chapter on two Becket windows at Angers and Coutances is the most methodologically ambitious, bringing in elements of postcolonial and frontier theory to explain the presence of ambiguous or even honoured portrayals of Henry II and the knight-assassins. Once again, bonds of kinship and affinity across the Plantagenet world, in this case linking the kings of Scotland to the Beaumont viscounts of Maine via the murderers, may have been the driving force behind 'transgressive' retellings of the Becket story to emphasise shared and enduring loyalties on the Plantagenet-Capetian border. Surprisingly this piece is also to be found, in very similar form and content, as 'Postcolonising Thomas Becket' in the recently-published volume Postcolonising the Medieval Image, with neither chapter making reference to the existence of the other.

Given the breadth of Becket's cult it is perhaps a missed opportunity that the main discussion of material or visual culture is in two chapters on stained glass. Furthermore 'the Plantagenet World' is, in this instance, restricted largely to the well-trodden ground of England and Northern France, with single chapters on Castile and Saxony. There is little if anything on Becket's spread into Scotland, Ireland, Sicily, even Hungary and other more far-flung outposts of Angevin influence. Yet the volume makes no claim to completeness, and this may be an overly unfair criticism.

What is certain is that the chapters contained in this volume provide a lively, thoroughly researched, and stimulating contribution to an ever-expanding Becket literature. With the 850th anniversary of the martyrdom (and 800th of the translation) fast approaching this collection is timely, and a valuable reminder of the many ways in which the most internationally important English saint has been, and often continues to be, celebrated.