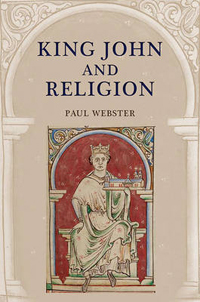 The traditional view of King John, based on the chronicle reports of his reign, is that of an irreligious monster. Writing 20 years or so after John's death in 1216, Matthew Paris told a famous tale about how, on one occasion, the king had sent an envoy to a Muslim emir in North Africa, offering to abandon Christianity and embrace Islam in exchange for the emir's military support. Another chronicler, Adam of Eynsham, writing during John's own lifetime, asserted that the king did not hear mass at his coronation or at any point thereafter. This was mud that stuck. Seven hundred years later, historians were still happily repeating and endorsing these views. 'The terrible verdict of the king's contemporaries', wrote the Victorian scholar J. R. Green, 'has passed into the sober judgement of history'.

Paul Webster's book sets out to discredit this opinion once and for all, offering a comprehensive exploration of the evidence for John's religious activity across the whole of the king's life. It is not as groundbreaking as the copy on its back cover would have us believe, for no serious historian since the mid-twentieth century has argued that John was apostate or irreligious. W. L. Warren, in his revisionist biography of 1960, suggested that the king was 'at least conventionally devout', and that is essentially the conclusion on offer here: with the exception of zealots like Henry III or Louis IX, John was no different to other medieval monarchs in his religious devotions. As explorations go, however, it is commendably thorough. Never before has the evidence for John's relationship with the church and religion been so comprehensively mined, and the case for his defence so extensively put.

A comprehensive approach can on occasion have its drawbacks. So diligent is the collection of data that sometimes it approximates a mountain, and the best arguments are in danger of becoming buried. In his first chapter, for example, Webster takes us through the evidence which indicates that, pace Adam of Eynsham, John regularly heard mass, much of which turns out to be circumstantial: many occasions are listed where John is 'likely to have participated in mass'. Gerald of Wales's description of how he came upon John hearing mass in his chapel, which is surely more clinching, is mentioned only a single sentence.

Subsequent chapters unfold in similar fashion, with reams of evidence emphasizing the frequency and scale of John's outward displays of religion. The point is well made that at least some of this activity - for example, the founding of chantries - required the king's personal initiative, even if much of it must have proceeded automatically as part of the routine business of his almoners. The most interesting chapter concerns the king's charity and almsgiving, for which Webster is able to draw upon surviving Misae and Liberate rolls - sources 'that bring us closer to the king's personal religion than other surviving evidence'. They certainly demonstrate that John disliked fasting, and preferred to do penance for both himself and his closest associates by giving alms on the many occasions when they feasted rather than abstaining. It would have been interesting to know how, in terms of frequency, John compared in this regard to his successors, but all we are told is that Henry III and Edward I paid alms at a similar monetary rate.

The major stumbling block, as Webster himself acknowledges on more than one occasion, is that, for all his outward devotions, John's 'deeper motivation is ultimately impossible to determine'. Webster's judgements on the king are almost always shrewd and he is careful to avoid speculation, though sometimes inclined to give John the benefit of the doubt. 'Perhaps the king washed the feet of the poor', he suggests at one point, which is certainly an arresting image, but one that runs well ahead of the evidence. Similarly, in his chapter on the Interdict, Webster dismisses as fanciful Roger of Wendover's account of lay attacks on the clergy, citing John's well-known letter forbidding such attacks, issued three weeks after the king had ordered the seizure of the Church's estates. Arguably, the letter more likely indicates that, in the short term at least, attacks on the clergy had been a reality. In a chapter on John's family, we are told that his mother, Eleanor of Aquitaine, was 'a primary influence on her children's religion', though one wonders how true this can have been in John's own case, since he was raised from infancy by the nuns of Fontevraud, and by the time he was released from their tutelage his mother was under house arrest on the order's of his father. It is, however, interesting to note that John commissioned prayers not only for both his parents but also his elder brother, Richard, given their well-chronicled sibling rivalry, and equally intriguing that none of the family did much to mourn the middle brother, Geoffrey, after his premature death in 1186.

Overall, King John and Religion is not as pioneering as its publisher's blurb pretends, but the subject of John's religion has been diligently explored and painstakingly mapped, to the great benefit of scholars of the future.