Paul Srodecki / Norbert Kersken (eds.): The Expansion of the Faith. Crusading on the Frontiers of Latin Christendom in the High Middle Ages, Turnhout: Brepols 2022 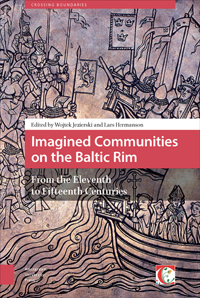 In 1991 Benedict Anderson's Imagined Communities: Reflections on the Origins and Spread of Nationalism struck Academia like a thunderbolt, with many readers electrified by the idea that he had unmasked the concepts of national identity and nationalism as artificial concepts that could be as easily removed as they had been created by what he called print capitalism.

What makes this collection of essays interesting is that these twelve medievalists apply Anderson's explanation of the origins of modern nationalism to enhance our understanding of an obscure corner of the medieval world.

The extensive introduction by Wojtek Jezierski says that the essays are the product of two workshops in 2014, one in Gothenburg in April, the other in Rome in December. He notes that while imagined communities are only socially constructed ideas, they have great power for persuading individuals and groups that their community is worth defending against "the other". This is what binds them together.

The first section - entitled Visions of Community - describes how a frontier region was discovered by Europe, then conquered, Christianized and finally colonized.

Thomas Foerster (Mental Mapping in the Works of Adam of Bremen and Saxo Grammaticus, Eleventh - Thirteenth Centuries) demonstrates that medieval scholars began every description of the Baltic region by citing what ancient and earlier medieval writers had said. Only then did they write down what they knew from personal experience or from contemporary reports.

The essay by Margaretha Nordquist (Peasants and Swedish Men in Vernacular Rhyme Chronicles, Late Fifteenth Century) notes that Swedes created a national unity by contrasting themselves with hostile neighbors, and that during the era of the Kalmar Union, this meant supporting Sten Sture against Danes and Russians. Normally, emotions such as patriotism, honor, and anger were the monopoly of the nobility, but at one moment - in 1463, when King Christian I introduced new taxes and imprisoned the archbishop - the peasants used those terms to oppose the king. The peasants failed, but the popularity of the Rhyme Chronicles demonstrated how such sentiments were shared across the classes.

The second section concentrates on Cultic and Missionary Communities, especially on monastic centers that supported missionaries and on writers of the Christian encounters with paganism in the Baltic region.

Grzegorz Pac (Women and Religious Bonds on the Baltic Rim and in Central Europe, Eleventh - Twelfth Centuries) illustrates how foreign-born wives brought prayers and attachments to religious houses to their husbands' courts. Women's role in political life may have been passive, but their influence on religious life shows that the line between Catholic and Orthodox was less sharply drawn than we often imagine.

Wojtek Jezierski (Missionary Emotional Communities in the Southern Baltic, Eleventh - Thirteenth Centuries) concentrates on only one of the emotions associated with "risk societies" - fear of the other. For Henry of Livonia the horrors of the early years of encounter and conquest gave way to joy over the arrival of the papal legate charged with restoring order to a colonial outpost in danger of self-destruction by the quarreling Archbishop of Riga, the Livonian Knights (a crusading order later incorporated into the Teutonic Order), and the King of Denmark.

This theme was continued and enhanced by Linda Kaljundi (Henry of Livonia on the Making of a Christian Colony, Early Thirteenth Century), who explained how the missionaries expanded the emotional community to include the native tribes through plays, celebrations, and elaborate ceremonies of mourning.

Tuomas Heikkilä (St. Henry and the Creation of Christian Identity in Finland, Thirteenth - Fifteenth Centuries) followed Anderson's ideas closely by illustrating how the writing of history brought diverse communities together as a single people.

Traditionally people accepted the story that pagan Finns had been conquered and Christianized by Swedish crusaders, especially the expedition led by the saintly king, Eric, and his English-born bishop of Uppsala. Eric returned home victorious, but Bishop Henry remained in Finland and was soon martyred. The Legend of St Henry and the later vernacular poem, the Death Psalm of Bishop Henry associated historical events with local parishes and encouraged hearers to imagine themselves as a part of the heroic past. Henry became an imaginary saint for an imagined community.

Thomas Lindkvist (Royal, Aristocratic, and Local Visions in Sweden and Gotland, Thirteenth - Fourteenth Centuries) describes the development of laws in the kingdom and on Gotland, arguing that these became the basis of the Swedish self-identification.

Similarly, Pavel V. Lukin (Brotherhood and Communalism in Medieval Novgorod) showes that various ceremonies such as kissing the cross, feasts, and elections made citizens into a brotherhood.

Cordelia Heß (Semantics of Conflict in Fourteenth-Century Lübeck) challenges central concepts of the Anderson thesis in an interesting reading of the 1385 Knochenhaueraufstand in Detmar's Chronicle. As usual, the elite prevail over the poorly-organized commoners.

The last section was The Baltic Rim: A View From Afar. This takes us beyond the horizon seen by traditional scholars.

Bjørn Bandlien (Scandinavian Perceptions of the Russians, Late Twelfth - Early Fourteenth Centuries) notes that Scandinavians originally saw Russians as fellow Christians, not as enemies; the Norwegians held to this view because they had a common foe in Finnish pagans; the Swedes, however, became hostile in the crusading era because Novgorod was protecting its tribute-paying pagans.

Hans Jacob Orning (The Baltic Viewed from Northern Iceland in the Mid-Fifteenth Century) presented an interesting study of what societal values and geographic information can be found in obscure sagas.

The book concludes with an Afterword by Barbara Rosenwein (Imagined Emotions for Imagined Communities), who had inspired the conferences. She notes, how often, surprisingly, the essays reflected on emotions, a theme that Anderson had not stressed.

There is much worth thinking about in this collection. While many of the essays could have been written without the need to fit them into the Anderson framework, what is important is that the requirement to state one's ideas in another format often results in new insights. New Imaginations, the organizers of this book would say.

For this reason research libraries should buy this book. It is too esoteric and too expensive for the average scholar, but it is too important to ignore. It is beautifully done, with a handsome cover, a stylistically unified text in good English, and carefully edited.

Anderson passed away in 2015. Although this book was not intended as a memorial to his life and work, it is a testimony to what he had achieved.