Paul Srodecki / Norbert Kersken (eds.): The Expansion of the Faith 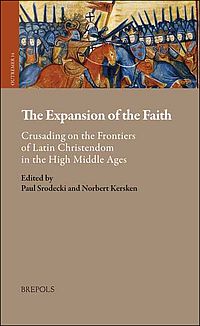 This book grew out of a 2017 conference at the Herder-Institut in Marburg/Lahn, a center well-known to scholars interested in East Central Europe, beloved for its extensive library and its attractive site behind the castle overlooking the city.

In the introduction Paul Srodecki explained that the conference papers would refute the idea that there were only a few numbered military expeditions that counted as crusades. Indeed, there were crusades approved by the popes practically on the eastern doorstep, and others farther afield.

The issue had arisen in 1965 when Hans Eberhard Mayer limited the term crusade only to efforts aimed at recovering Jerusalem. Srodecki makes a good case for the more liberal views of Jonathan Riley-Smith, who believed that the qualifications were papal authorization, vows taken by participants, guarantees of protection of family and property while on crusade, and the promise of an indulgence equal to those enjoyed by those who took the cross for the Holy Land.

Fifty years ago it was certainly the case that Mayer held the field. At that time scholarship was dominated by Britons, with some French and Italian scholars, and a small number interested in Spain and Byzantium. Stephen Runciman was especially important in this, because his three-volume A History of the Crusades (1951-4) was so beautifully written that it reached a wide lay audience. He was immensely likeable, a trait that won him many followers.

At that time Germans and Poles who wanted to study the crusading era in the North were not kindly received, with German scholars who admitted to being Ostforscher often being considered Nazi sympathizers; nevertheless, the West Germans managed to organize scholarly societies for Prussia and the Baltic and to found several study centers, including the one in Berlin, the Geheimes Staatsarchiv Preußischer Kulturbesitz, with scholarly programs that did not reflect what outsiders might have expected. Best of all was the Herder Institut, which produced the Zeitschrift für Ostforschung from 1952 on (renamed in 1995 as Zeitschrift für Osmitteleuropa Forschung). Its annex was used by the Bundesnachrichtendienst, the intelligence service, for research because of its unparalleled collection of East Central European newspapers and its extensive clipping files. The Poles created centers in northern universities and published the excellent journal Ordines Militares.

Srodecki could have mentioned Udo Arnold, whose efforts at post-war reconciliation did much to reduce nationalist interpretations in Polish and German textbooks.

Given such concerns, it is understandable that earlier scholars lacked the time and energy to contest the Mayer formulation. Moreover, contemporary politics reinforced the emphasis on the Holy Land. The Middle East was a perennial flashpoint, with Israel standing in for the crusader states, and with Syria and Lebanon having obvious connections to the French crusading efforts. This began to change in the 1990s, arguably, when Lebanon slid into chaos, then during the Arab Spring, when the civil war in Syria tore that nation apart.

It was harder to connect Americans with medieval religious wars in spite of George W. Bush's convoluted efforts to justify the 2003 invasion of Iraq, but logic has played a small role in the debates. What killed off the popularity of the crusades as a conference topic, one might argue, was the rise of new interests, most importantly the role of women in the Middle Ages, a paucity of sources, and accusations of male dominance in the field. (One might note that this remains true even for the contributors to this book, though Nora Berend cannot be considered a token gesture at gender balance because she is a highly regarded scholar.)

In any case, fifty years ago there was little interest in the crusades in East Central Europe. The triumphal nationalism of the Second Reich had offended all foreign readers, and the crimes of the Third Reich solidified a belief that all Germans, medieval and modern, were imperialists who were best dismissed and forgotten. Most Americans were aware of the crusades in the Baltic only through having seen Sergei Eisenstein's 1938 Alexander Nevsky - a brilliant film that was less useful for history lessons than propaganda. Most American medievalists dismissed medieval German history as old-fashioned, inappropriate for the new era of ecumenical harmony and secularism. Who cared about the contests of emperors and popes? Moreover, German was considered difficult, and there was no point to studying even more difficult languages from farther east (unless it was Russian, which was hopefully believed useful for understanding modern politics). One could hardly travel in East Central Europe, and the food in state-run restaurants was boring. Europeans felt very much the same, with the division between Old Europe and New Europe confusing those who did not know that the latter were the newly independent states that figure in many of the essays in this book.

Even those Poles and Scandinavians who were aware of their own nations' crusading traditions were discouraged from writing about them; in the case of Poland and the Baltic States, the Soviet presence required denouncing all Germans and praising the Russian liberators no matter which century they had arrived in.

Concessions were made for the period 1300-1500, when Eastern Europeans became aware of the Turkish threat. But the years 1100-1300 were effectively off limits. The lack of charismatic leaders, the scarcity of chronicle descriptions and informative documents, and the inability to travel freely made this era a historiographical black hole.

That changed with the collapse of the Soviet Union. Slowly, scholars who had labored to explain everything in terms of a class struggle retrieved from the "Schubladen" half-forgotten drafts of papers on more traditional topics and began to prepare a new generation of scholars to exploit the fallow fields of local medieval studies.

That generation has now matured. This is their book.

Of the pioneer Scandinavian scholars, Kurt Villads Jensen is the best known. His contribution on "Burning of Idols - Mission and Theology around the Baltic Sea" raises the question of why pagan idols so angered Christians who gazed upon them. Were they so different from the Christs, Marys, and Saints they venerated? Certainly, the Christians were offended, because at every opportunity they destroyed them, often by burning.

Darius von Güttner-Sporzyński offers a spirited narrative of how the Piast rulers in Poland used the crusading movement to conquer lands to the north and east, beginning with the annexation of Pomerania, then participation in the Wendish Crusade, and culminating in the 1147 expedition into Prussia. Poland, he argued, was now fully engaged with the rest of Latin Christendom.

The remaining essays are on limited themes from various lands, but all demonstrating the universality of the crusading movement. Interesting, but since the Mayer/Runciman formula is no longer powerful, they are unlikely to affect the debate that Srodecki described.