Iris Sulimani: Diodorus' Mythistory and the Pagan Mission. Historiography and Culture-Heroes in the First Pentad of the Bibliotheke, Leiden / Boston: Brill 2011 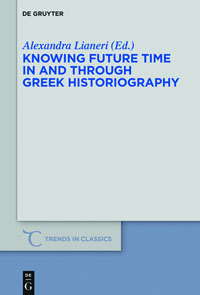 This book places itself in a growing body of research on issues of time and temporality in Greek literature. [1] For this reason, it will hold immediate interest for readers interested in this aspect, and they will find much to enjoy in reading it. However, it will not convert any of the sceptics; in fact, they are unlikely to make it through the 54-page long Introduction.

The Introduction sets out the dual purpose of the volume: 1. to 'identify and, to an extent, codify concepts of the future and corresponding temporal relations of 'before' and 'after' in the writings of Greek historians'; 2. To combine 'the study of ancient cases with a theoretical reflection on time and history' (3-4). It then discusses the Bachtinian concept of polyphony, before beginning a 25-page long, dense introduction to each section of the volume and the papers contained therein: 1. 'Future times and the poetics of historiography, or, the elusive temporality of historical knowledge', 2. 'Temporalities of the future and the times of historical action, or, Greek historiography between poiesis and praxis', and 3. 'Toward the modern futures of Greek times, or, toward a monologic poetics of history writing'. Whereas it is good to encounter a conference volume where the editor has thought carefully about the organisation of the papers and avoided the default of placing them in chronological order of text discussed, this part of the introduction is unnecessarily discursive and often phrased in an overly complicated manner. A representative sentence is, 'The poiesis that was Greek historiography, this section suggests, signals, simultaneously, the temporal necessity and unfinalisability or event potential enfolded in praxis' (31). This seems an unnecessary convoluted way of saying that whereas the text itself is finite, the present in which it was written was ongoing and open to different future possibilities.

However, most of the papers in the volume are less opaque, and many have interesting things to say about Greek historiography and its relationship to time, even if they span a range typical of conference volumes. Some papers, such as Emily Greenwood's, which bears the title 'Futures Real and Unreal in Greek Historiography', but is essentially about similarities between Thucydides and symbouleutic oratory, are good, but seem slightly shoe-horned into a volume about future time. Others, such as Antonis Tsakmakis' 'Between Thucydides and the Future' and Dennis Pausch's 'On the Shoulder of Greeks? Future Time in Livy's Ab urbe condita' are useful overviews of what a particular author has to say about the future, but hardly ground-breaking. It is impossible in such a short review to summarise each paper, so in the following I single out, in full recognition of the subjectivity of this method, the ones that made the most lasting impression on me.

Jonas Grethlein's 'Ancient Historiography and Futures Past' makes the point that a historiographer's telos, both in the sense of the chosen end-point of his history and the vantage point from which he views history, shapes the way he tells his story. The argument is compelling, but the insights it provides into Grethlein's chosen historiographers - Herodotus, Thucydides, Polybius, Sallust, and Tacitus - will seem unsurprising to any scholar familiar with recent research on each of these authors.

Emily Baragwanath's 'Knowing Future Time in Xenophon's Anabasis' offers a perceptive analysis of the Anabasis as a work acutely aware of the changes that inevitably happen over time. She begins with a discussion of the ability and inability of various leaders in the Anabasis to predict the future, based either on practical-strategic knowledge or understanding of character and psychology. The second half of the paper discusses the clash of probable and actual futures in the Anabasis and demonstrates how the outcome of events presented as the most likely is often not the actual outcome. Finally, the paper discusses the clash between ideal and actual futures and demonstrates the profound disillusion at the heart of the work. It concludes with placing this in the context of Xenophon's wider oeuvre and his particular brand of didacticism, placing the lack of clarity about the future which characterises his work in opposition to Thucydides' promise to help his readers see it 'clearly'.

Katharina Wesselmann, in 'No Future? Possibilities and Permanence in Herodotus' Histories', offers a thought-provoking analysis of Herodotus. She begins with discussing the 'intradiegetic' futures of characters in the Histories, both those predicted by oracles and misunderstood, and those hinted at but never fulfilled. Then she briefly touches on the future in the sense of the time of Herodotus' writing and the hints readers may find of that time in the text. The heart of the article, however, is an excellent discussion of the 'omnitemporal continuity of repetition' created by the patterns repeated in the Histories, which gives the text its timelessness (213-14). This should be of interest to any student of Herodotus.

Nicolas Wiater, in 'Shifting Endings, Ambiguity and Deferred Closure in Polybius' Histories', argues persuasively that Polybius deliberately denied his readers 'the sense of an ending' by extending his narrative beyond the originally planned end-point of 167 BC to 145 BC. By means of a close reading of the crucial passage 3.4, he demonstrates that Polybius deliberately plays with the idea of an ending while signalling to the readers that history does not end, and that they themselves will be the ones to continue it by living through it, thus changing the Histories from an author-dominated to a reader-centred narrative and constituting the work's usefulness (253-4). This is an innovative reading of Polybius, which offers a solution at the same time neat and exciting for interpreting much discussed passages such as the four Greek views on the destruction of Carthage (Plb. 36.9). It is complemented by an equally perceptive close reading of 38.21, the passage where Scipio watches Carthage burn and foresees the fall of Rome, which sees new nuances in the text and finally posits Scipio as a model for Polybius' readers in their attitudes to their own present and future (257-65).

Tim Rood in 'Horoscopes of Empires: Future Ruins from Thucydides to Macaulay' takes Thucydides' famous statement about the deceptive impression future ruins of Athens and Sparta would give (Thuc. 1.10.1-2) as point of departure for a thought-provoking exploration of the trope of the future ruins of one's own city/country in 18th-century writing and then compares this with Thucydides' statement. He concludes that the two differ in that Thucydides is concerned with encouraging correct historical interpretation, i.e. a historicist purpose which relies on a future observer of the same kind as himself and his readers, whereas 18th-century writers are concerned with the memorialistation of their own presents and often imagine an observer of a different sort, such as a future civilised member of a currently uncivilised people. Nonetheless, Thucydides' statement also entails the assumption of historical rupture, and like his modern counterparts he is primarily interested in the future for what it can say about the present.

Overall, the volume can offer much food for thought, but most readers are likely to want to read individual papers only rather than the whole thing.

[1] E.g. Irene de Jong / René Nünlist (eds.): Time in Ancient Greek Literature, Leiden 2007; Alex C. Purves: Space and time in ancient Greek narrative, Cambridge 2010; Jonas Grethlein: The Greeks and their past. Poetry, oratory and history in the fifth century BCE, Cambridge 2010, and Experience and teleology in ancient historiography. Futures past from Herodotus to Augustine, Cambridge 2013; Duncan Kennedy: Antiquity and the meanings of time. A philosophy of ancient and modern literature, London 2013.