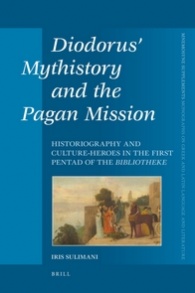 This monograph forms part of the new wave of Diodoran scholarship, which strives to untangle Diodorus' own contribution to his work rather than seeing it as purely a compilation made with scissors and paste out of earlier historiographies.

The introduction sets out the project: to contribute to our understanding both of Diodorus as an author and of the Hellenistic Age by means of a close examination of the first five books of the Bibliotheke. The book falls in two parts: Part I examines the degree of originality detectable in the first five books of the Bibliotheke; Part II analyses Diodorus' narrative of the travels of six culture heroes (Osiris, Sesostris, Semiramis, Myrina, Dionysus, and Heracles).

Part I is thorough and not terribly exciting, but nevertheless constitutes a valuable contribution to Diodoran scholarship. It does the sort of spade work - teasing out themes, examining recurring phrases, analysing methodology - for Diodorus which has long since been done for more popular ancient prose authors, and on which further research can build in the future.

Chapter 1, on the 'genre' of universal history, is largely dedicated to examining whether Diodorus lives up to his own criteria of universal history. Along the way it engages in a lengthy discussion of the end-date of Diodorus' composition. Implicit parallels between some of the culture heroes and Augustus are used to argue that Diodorus did not complete his work until 27 BC at the earliest, rather than the usually accepted date of 30 BC. The chapter ends with an argument to the effect that Diodorus invented a new type of universal history, which then was taken over by Pompeius Trogus and Nicolaus of Damascus, and it labels him a "pioneer".

Chapter 2 tackles the old chestnut of Diodorus' relationship with his sources. By comparing "motives" of the journey narratives of books 1-5 with the rest of the Bibliotheke as well as with earlier, later, and contemporary literature it reinforces the argument first put by Sacks in 1990 that the Bibliotheke reflects concerns of the 1st century BC as much as the concerns of Diodorus' sources. [1] Not every argument is equally convincing, but overall Sulimani manages to demonstrate that two prevailing themes of books 1-5 of the Bibliotheke are Diodorus' own contribution: the idea that "conferring benefits upon mankind will bestow upon the benefactor immortal honours" (64-82) and the emphasis on merciful treatment of the defeated.

Chapter 3 purports to deal with Diodorus' 'working methods', but really only discusses his programmatic remarks and the various structuring devices of his text. It covers proems and conclusions to individual books, programmatic remarks on methodology and intention (incongruously placed in a sub-chapter on the proem to Book 1), transitional phrases, digressions, remarks on the selection process and on the proper proportions of the work, cross references, and finally the structure of narratives of gods and culture heroes. The piling up of examples of recurring phrases in Diodorus is tedious and may be claimed to repeat research carried out by Palm in 1955, [2] but Sulimani succeeds in arguing that the recurring phrases are a structuring device and demonstrate Diodorus' control over his material.

Part II is rather more interesting than part I and offers some intriguing suggestions about Diodorus' own contribution to his work and the value of the Bibliotheke as a snapshot of a Hellenistic world view. The details are often clearer than the overall argument, and a tighter structure with more helpful chapter headings and more signposting of the overall questions along the way would have been useful; but if you do not mind getting lost in the sprawling argument, there is much of interest to be found.

Chapter 4 argues that there are hard geographical facts behind the journeys described in Books 1-5, and that many of the places visited by Diodorus' characters are places that for one reason or another had important connotations for 1st-century BC readers. It is supported by three maps at the front of the book, which clearly show the route of each character. This chapter, to me, is the highlight of the book: thoroughly researched and well argued it is entirely convincing and makes for fascinating reading.

Chapter 5 details the benefactions performed by Diodorus' culture heroes and argues that these were inspired by the actions of men of his own day or the earlier Hellenistic period. The argument is interesting and mainly convincing: the Romans of the 1st century BC were really very concerned with the acquisition and preservation of grain, which is what most of Diodorus' culture heroes teach, and the heroes do indeed found cities for much the same reasons as the Hellenistic kings. However, some parts of it are far-fetched: is Diodorus' claim that Dionysus was the first to yoke an ox to a plough really a reflection of improvements to the plough construction in the 1st century BC, or, indeed, of Archimedes' invention of the water screw (234-5)?

Chapter 6 purports to deal with the relationships between the culture heroes and their 'addressees'. In practice it discusses Diodorus' attitude to the treatment of the defeated by the victors, his views on foreigners, and the religious dimension of the culture heroes' "mission". The bulk of the chapter is interesting reading: it consists of a thorough discussion of Diodorus' views on foreigners, accompanied by a detailed overview of the views on foreigners from Classical Greece to 1st-century BC Rome, and concludes that Diodorus' narrative is inspired by his own times, and especially by the examples of Alexander the Great and Caesar.

The Conclusion mainly reiterates the arguments of the chapters. It adds the interesting suggestion that the Bibliotheke, without being a major literary achievement, is nevertheless a valuable reflection of the Hellenistic mindset. This is doubtless true, and should recruit more scholars to the project of deciphering its cultural messages.

The writing style is sometimes unclear, due to infelicities such as an odd mixture of tenses within sentences, (e.g. "Though myths are complex and consisted of fictional elements, ancient and modern scholars both consider them significant" 12) or the use of 'just as' incorrectly for 'just as if' (e.g. "Those who wrote universal histories, he argues, aspired to encompass all men in one systematic treatise, just as they were the servants of divine providence" (24) [emphasis original]). This is understandable in a book written in a language other than the author's first language, but it is surprising that the copy editor has not picked it up. On page 125, it is extraordinary to encounter the statement that Hector predicted Achilles' death "being ill", accompanied by an entirely unhelpful footnote reference to Il. VI.448-465. (Hector does, of course, predict Achilles' death at the moment of his own death, by the hand of Achilles, at Il. XXII.355-363; the 'prophesy' of VI.448-465 is about the enslavement of Andromache.)

Overall, the book is a valuable contribution to Diodoran scholarship. It is, to the best of my knowledge, only the second monograph on Diodorus to be published in English, and it is a must-read for anyone interested in this controversial author. The book contains much of value and interest, particularly in its second half. It could, however, have done with some tighter editing, both on the level of language and argument.