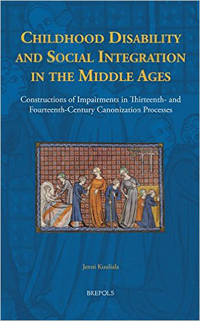 Jenni Kuuliala's work on children with impairments and disabilities as portrayed in the testimonies of the late-medieval canonization process is a masterful account of the lives, fears, emotions, and conditions of children living with and overcoming disabilities and impairments. Often these testimonies were from parents, other family members, and neighbors during interviews by religious clerks concerning the condition of the child and his progress toward healing and any connection to the possible saint in the form of prayer, direct encounter, or other intervention. Occasionally, and most interestingly, Kuuliala has unearthed actual testimony from the impaired child - now healed or partially healed - and often later as an adult. Many of these accounts were not memories of the child but the well-rehearsed and comfortable accounts her parent or other adult told her during her formative years. This study gives the reader valuable information beyond disabilities and belief structures; it covers the medieval family and neighborhood network, allowing the reader a glimpse of children at play and work, taunting and teasing one another and, at the same time, praying for and sharing with disabled children.

This study, a refined version of Kuuliala's doctoral thesis, as she puts it, "is the first that analyses medieval disability exclusively in the context of canonization, thus placing the miraculous and sainthood at the core" (9) of her research. It investigates impairments ranging from congenital conditions to injuries and illnesses that resulted in disabling conditions, at least for a time. These conditions ranged from blindness, which might only involve one eye or an eye infection rather than complete blindness; deafness, which, again, might only be in one ear or temporary deafness because of a punctured ear drum (blood coming from the ear); mental health conditions, including intellectual disabilities; lameness; quivering or unsteadiness to the point of being unable to walk or needing a crutch at an early age; walking late as an infant; speech impediments; and facial disfigurement, which, while not a disability per se, meant that the girl in question could not go out in public.

The study is broken down into three main sections: parents and family, the wider community, and the child. Yet, the child looms large in every section, and case studies give the reader great incite into the daily lives of disabled children as they begged in front of churches or received medical care because a physician felt a sense of pietas, which Kuuliala points out is not quite our word "pity" but a refined awareness of caritas or charity. In all cases "pietas or pitié in these miracle narratives, however, has strongly religious connotations." (189)

The author dialogues throughout with other medieval disability scholars. The groundbreaking work of Irina Metzler, most importantly, championed the "social model" of disabilities. [1] Kuuliala acknowledges Metzler's influence on her work as well as where their works differ. For example, Kuuliala describes how Metzler approaches the disabled person's liminal status, then writes,

"On the other hand, if we consider 'liminality' in its original meaning, as invented by Arnold Van Gennep [The Rites of Passage (Routledge, 2004)] in his discussion of the rites of passage and late further developed by Victor Turner [The Ritual Process: Structure and Anti-structure (Transaction Publishers, 2008)] and many others, the concept of 'liminality' includes the assumption of transition. That is, liminality is not something that remains, but something that eventually needs to be stabilized, which pertains to physical impairments when taking into account the possibility of cure." (194)

The author is pointing to her own thesis of impairment as being curable. The hoped-for cure in these cases arriving as a perceived miracle, one that helps prove the case of a possible saint. Kuuliala similarly engages with Edward Wheatley and his "religious model" [2] as well as Avi Rose [3] and her work on the four categories of "western religious attitudes towards physical impairments." (186) Kuuliala completes this discussion with, "Wheatley and Rose highlight many aspects of medieval religious discourse on disability and its connection with pity and charity. In contemporary discussion on disability and marginalization, pity is a frequent theme, and is now considered to be a negative aspect of community attitudes towards disability." (187) There are many other such passages as Kuuliala brings forward her own nuanced interpretation of disabilities in the Middle Ages.

The two sections of this book I found most enjoyable are likely to be the most controversial to other medieval disability scholars. Kuuliala in both cases handles the material and potential questions with poise and extremely well documented evidence. The first is a series of passages discussing disfigurement, which is not a physical or mental disability, but rather a condition that might have a social stigma. This concept involving shame and mockery while not among the "classic disabilities" still had social and underlying medical consequences, depending on the severity and affliction. One father with taunting co-workers and neighbors kept his disfigured daughter ("a nose resembling a cuckoo," his co-worker commented) locked in the house. (178) This deprivation of a normal life certainly qualifies as socially disabling.

The other section that I found intriguing is the chapter on "Reconstructing Lived Experience." (243) Here Kuuliala looks specifically at the words of children or adults who were children to whom a miracle was attached. She examines how they learned of the miracle as children and whether they have any personal memory of the event, which they often do not. Young children learned of their former impairments, blindness or deafness in several cases, through the repeated stories of their parents or caregivers. Now well and whole, they only remember the miracle as a story, not as lived experience. Older children do remember, elaborating on the original account given by witnesses as they recall other details. For example, Johannes Nani was twelve when he contracted gutta - a swelling in his legs, loins, knees, and back - which he had for eight years. (248) These snippets of daily life and remembered activities, pain, frustration, shame, caregiving, and recovery are not only touching but also extremely helpful for those seeking to understand disabilities in a medieval setting.

I highly recommend Kuuliala's study of childhood. This work is well written and well researched. It has deep references and notes with translations of quotes and a good bibliography, making it accessible for advanced undergraduates. The book would fit comfortably in a classroom setting of medieval studies, gender studies, and the history of medieval health, religion, disabilities, family, or childhood. This work perceptively and sensitively examines the interplay between saints, the Church, children, and their families.

[2] Edward Wheatley: Stumbling Blocks before the Blind: Medieval Constructions of a Disability, University of Michigan Press 2010.