Leah DeVun: Prophecy, Alchemy, and the End of Time 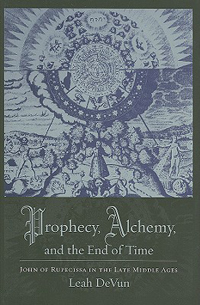 A good summary of the life, influences, and works of John of Rupescissa (d. 1366) is long overdue. John, a friar and sometimes scientist, not only spent many years in prison, but he also spent many years thinking about and writing his views concerning the end of days, medicinal alcohol, and natural philosophy generally. Leah DeVun (Rutgers University) has produced a well-documented and accessible monograph, which, in her words, "will put John of Rupescissa back together" (6), since scholars of medicine or religion have differently studied his works with little cross-integration between the two. DeVun's goal is "to evaluate the different aspects of naturalist and religious thought that operate within [Rupescissa's] work [and ...] to show that spirituality and naturalism need not be discussed in isolation." (6) The author does this well, demonstrating that "Rupescissa and his quintessence redirected not only the development of early modern alchemy but also the very core of naturalist inquiry." (163)

Rupescissa had a wide audience in the later Middle Ages and continued to have a following into the Early Modern period. His "predictions may have resonated all the more deeply with readers due to the crescendo of social and economic hardships that assaulted Western Europe in the fourteenth century." (30) DeVun points to the famines, plagues, and Hundred Years' War as examples of why Rupescissa's so-called "prophesies" might have struck a cord with his contemporaries. As well, he seems to have been influenced by the predictions and writings of Joachim of Fiore, Arnald of Villanova, Peter Olivi, and the Spiritual Franciscans (40).

A Franciscan himself, Rupescissa "adopted the Joachite portrait of the last days - a time in which poor Franciscans fought evil, preached to the world, and, when necessary, resisted an ecclesiastical elite allied with Antichrist." (32) DeVun has good summaries in this volume that explain the influences on Rupescissa. The theories of Joachim of Fiore (1135-1202) are deconstructed so that an advanced undergraduate might find his works understandable. Also good are the explanations of the theories of Arnald of Villanova (1240-1311) and Peter Olivi (1248-1298), who both contribute to Rupescissa's end-of-days timeline, and of Paracelsus (1493-1541), who was influenced by Rupescissa. Also discussed are the influences of Roger Bacon (1214-1292) and Ramón Llull (c. 1232-1316), among others.

While Rupescissa was in the papal prison, an English priest, Simon Legat, joined him and, quite literally, drove Rupescissa a bit crazy. Rupescissa writes that Legat had "invented for me a new form of stoning" (28). The section of the book on Rupescissa's personal trials in prison is very well written and illuminating, shining light on his theories and medicines. His experiences in prison seem to act as a hinge between his prophesies and his alchemical science, especially medicinal quintessence and aqua ardens, medical alcohol (52). DeVun aptly labels his works in this area "apocalyptic alchemy" (57). She writes, "Both the idea of the quintessence and the use of alchemically produced materials in internal medicine were adopted by later and more influential works of 'iatrochemistry' (literally, 'medical chemistry'), especially in the sixteenth century." (60)

One of the strongest arguments in the volume is that of DeVun's analysis of alchemical metaphor. She rightly points out that: "Scholars of modern science have analyzed contemporary scientific metaphors, such as 'greenhouse' gases, cell 'factories', electron 'orbits', and other concepts that have become standard ways of imagining our world in the twenty-first century." (103) DeVun makes the point that "Rupescissa's code names, metaphors, and similes" serve many of the same purposes as employed by scientists today, namely to describe the indescribable. For Rupescissa, it did much the same and more, portraying "difficult-to-understand alchemical processes" while at the same time giving his science "the weighty significance of the apocalypse." (103)

If this book has a flaw, it is that in a few places - and they are few - DeVun seems to be too close to her subject, caught up in her descriptions and explanations of Rupescissa. In these spots, her writing becomes overly sympathetic to his cause. For example, she writes as the opening to a paragraph, "In addition, strict new laws instituted by the Repairer will result in the disappearance of all vice and violence among the population. The Holy Spirit will descend over all people so that they understand divine truth, prompting them to beat their swords into plowshares and their spears into pruning hooks." (42) The "Repairer", not mentioned for several pages and not reintroduced in this particular section of the chapter, is reference to Rupescissa's "Angelic Pope", who, in his apocalyptic vision will expel all unworthy clerics from the Church. DeVun here is summarizing Rupescissa's bright future for the Fransiscans, but at times leaves off from couching terms and ideas as his. In other places, she writes quite casually, employing almost a conversational style: "Although I have traced the ideas behind the quintessence through scholastic medicine and natural philosophy, I still have not arrived at precisely why Rupescissa thought that the quintessence was able to balance bodies on earth as the fifth element balanced bodies in the sky." (73) Perhaps that is this reviewer's preference - wanting to focus on Rupescissa and knowing that all of the book's theories are those of the author without being told.

Rupescissa's works, "concordances of science and revelation" (63), reveal an active intelligence. The Avignon papacy might have locked him up as a fantasticus - a person who lives in his imagination - but his wide readership over centuries demonstrates that Rupescissa, as DeVun shows, hit a cord with his contemporaries. His alchemy was imbued with his apocalyptic sense of urgency, which gave way to a need to become balanced humorally, spiritually, and scientifically. "Rupescissa's dire predictions of Antichrist and apocalyptic tribulation actually offered something incongruous to his readers: hope." (151) This book, with its thorough notes and accessibility, will appeal to those interested in the history of religion, science, medicine, pseudo-science - including both alchemy and astronomy - and apocalyptic prophesies. An informative study, Prophecy, Alchemy, and the End of Time, now available in paperback, would make a good addition to courses on science and religion at the turn in society from medieval to early modern.