Jason König: Saints and Symposiasts. The Literature of Food and the Symposium in Greco-Roman and Early Christian Culture, Cambridge: Cambridge University Press 2012 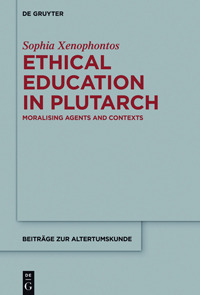 This revised dissertation investigates Plutarch's notion of moral education, organized around agents and sites of teaching. Its major merit is to survey Plutarch's full output to identify recurrent themes and a view of moral paideia as a life-long process. Reading the Moralia's prescriptions beside exempla from the Lives underscores the practicality of Plutarch's ethics, against a tendency to stress their theoretical nature. Xenophontos argues persuasively that he had a flexible but coherent model of moral pedagogy, applied across ages and contexts by a range of "moralising agents" - parents, teachers, husbands, statesmen, generals, and philosophical authorities. It is founded on intimacy between agent and recipient and the agent's accommodation of the learner's character and needs.

Second Sophistic specialists will find promise and frustrations here. Xenophontos reads Plutarch as a subtle critic of imperial values, redefining power in ethical, rather than political or military terms. Her focus on moral formation adds refreshing layers to the prevailing approach to imperial Greek paideia as an index of socio-political distinction. Yet instead of considering how those goals of education interacted, Xenophontos treats them as incompatible. Her Plutarch is thus an outlier to the Second Sophistic, against recent moves to locate him within those horizons. "Sophistic" is implicitly defined as vacuous, self-interested paideia, impossible for "a dedicated philosopher and moralist of Plutarch's calibre." His performative displays of paideia are distanced from sophistic culture on the ground that he aims to edify rather than to consolidate social power. Such circular demarcations of sophistic and philosophy undercut the cogency of the analysis.

Ch. 1 roots Plutarch's educational theory in the Platonic/Aristotelian view that nurture can shape nature through habit formation. Education is thus necessary and effective, although affected by physis and circumstances. Can education change character, then? Xenophontos modifies the view that Plutarch believes nature cannot change, but only be revealed or degrade: while fixed physis and "integrated" characters make real change difficult, behavior and acquired traits can be altered. External forces, including education, can produce ethical progress and correction as well as shallow or negative change. This is easier to see in the Moralia, which advise readers on molding innate character, than the Lives, which diagnose causes rather than prescribe remedies.

Plutarch's interest in parents' molding of children concentrates on adult sons and fathers (Ch. 2). Mothers in the Moralia are caregivers, not mental or moral guides. In a few Lives, widowed mothers exert life-long moral and political influence over sons or provide examples for them in death, but only as surrogates for dead or socially inferior fathers. Fathers in the Lives play three main moral roles: obscure or absent fathers can spur, rather than impede, achievement; emulating or reacting against real or fictive fathers can inspire greatness; and an ideal father emphasizes moral upbringing over grooming his sons for political and military power.

Ch. 3 shows that On reading the poets, On listening to lectures, and On progress in virtue comprise a single program of moral education. In the first, Plutarch speaks as one father to another, while On listening addresses the adolescent philosophy student. Contra Plato, Plutarch deems studying poetry propaideutic for philosophy, since they require parallel skills. On progress picks up with its addressee in early adulthood, as a recent "graduate" urged not to abandon philosophy now that his mind has been cleared by rational discourse, then moves on to the concerns of older men. Teachers figure less in the Lives, except in the Platonic Dion and Alcibiades. Moral pedagogy there is complex, affected by each pupil's preparation, nature, and environment, and focalized through the person with the "more interesting moral problem." Elsewhere Xenophontos adds that, unlike Plato, Plutarch depicts Platonic/Socratic teaching as more moral and affective than cognitive, aimed broadly at "a form of universal moral excellence with practical application" for Greco-Roman aristocrats.

Marriage (Ch. 4) is a site for moral education of wives by husbands, rarely the reverse. While the Advice on marriage addresses both spouses, she is cast solely in the role of modest, silent listener, while he is the speaker and moral paradigm - as Plutarch is in the Consolation to my wife. Women in the Virtues of Women are ethical models, not verbal instructors; there is no Plutarchan Diotima. In the Lives, husbands rely on a wife's example when weak or in crisis, but verbal teaching by women signals and causes depravity, as when Antony is tutored by Fulvia and Cleopatra.

Men's moral education continues in political life (Ch. 5). Plutarch's politician applies the virtues learned by the student, and adopts a pedagogical role in turn, first for citizens (Political Precepts), then as an experienced elder statesman mentoring younger men (On whether old men should engage in public affairs), an ethical twist on a Platonic ideal. Plutarch's autobiographical anecdotes find scope for virtue within the narrowed horizons of Greek civic life under Rome: eschewing sophists' "rhetorical agonistics," he promotes moral well-being and influence as forms of power.

Ch. 6, on military ethics, focuses on two "reversed" pairs of Lives, Aemilius-Timoleon and Sertorius-Eumenes. Its topic is not moral formation of troops - a major theme only in the Sertorius - but generals' ethics in any context, and Plutarch's teaching of readers. Despite their tragic ends, he makes the two Romans into exemplars of erudite virtue and moral influence, linked to their military ability. Their Greek counterparts are the opposite: effective commanders, but not moral leaders. Xenophontos again sees Plutarch redefining power as moral virtue instead of external success. She posits that he stresses this theme in Roman Lives because it is more relevant for Roman readers or, more plausibly, a way of hellenising a "Roman" sphere of action.

The literary symposia of the Table Talk contain Plutarch's most sophisticated ethical pedagogy (Ch. 7), announced by didactic markers in its proems. These fictionalized vignettes prompt critical self-pedagogy, as readers consider how to handle similar situations. The programmatic opening Talks reveal two faces of "Plutarch" the character: the authoritative guide who gets the last word and the younger man poised between teacher and student. Throughout, when "Plutarch" speaks, he controls the discussion; only his older mentors are granted more authority. They model teaching methods that "Plutarch" imitates in their absence, as readers should emulate his examples. "Plutarch's" dominance strategies range from tactful self-effacement to aggressive correction, as befits and benefits his interlocutors. Silent interludes show that sympotic dialogue calls for the same quiet listening and reflection taught to students, confirming the cohesion of Plutarch's educational program.

Like many first books, this one has not fully outgrown the dissertation. It is a work of compilation rather than illumination. Convoluted analyses, signposting by rhetorical question, and reluctance to articulate clear conclusions obscure its argument. Still, it points toward valuable lines of inquiry into the role of Greek paideia in ethical formation and the internal coherence of Plutarch's corpus.