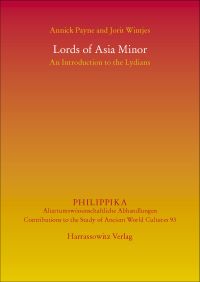 This book is a short (144 pages) overview of Lydian history and culture aimed at the general reader. It has the potential to fill a much-needed gap: the peoples of pre-Greek Asia Minor, including the Lydians, Phrygians, and Carians, made significant contributions to ancient Mediterranean history and culture, yet their accomplishments are little known outside of a small community of scholars specializing in Asia Minor. Therefore a book that presents an account of Lydian society to a wider public should be welcome. Its level of success, however, is rather mixed.

The opening chapter offers an overview of Lydian history. After a brief topographical survey, the discussion concentrates on the evidence for Lydian kingship, starting in the early first millennium BCE and ending with Lydia's conquest by the Achaemenian Persian Empire in the 540's BCE. The authors state that their aim is to encourage the reader "to rediscover an age of legendary kings" (Preface), and they place their emphasis on dramatic narrative, particularly the story of Croesus, the last ruler of an independent Lydian kingdom. The text's main focus is the Greek sources that provide information on Lydian kings. Since these are incomplete and much later than the events they describe, their reliability is questionable - witness the varying accounts of the death of Croesus - and the authors are right to point this out. However, the emphasis on the historicity of the written sources will undoubtedly be confusing to the general reader, and not detailed enough for a scholar. Moreover, the reader is left with the impression that this period was the only important phase of Lydian history, when in fact, there is evidence for settlement in Lydia well before first millennium BCE, and Lydia continued to exist after the Persian conquest, even if not as an independent state. Lydia was more than the sum of its early kings.

The history section is followed by a much shorter section on the archaeology of Lydia. The main emphasis here is on Sardis, capital of the Lydian kingdom, site of ongoing archaeological investigations. Apart from Sardis and the surrounding area, archaeological work has been mostly limited to field surveys and few other Lydian settlements are known. Despite many decades of excavation at Sardis, much of Lydian archaeology remains unexplored.

The third chapter, on the Lydian language, is rather frustrating. The material presented is highly technical, with tables and charts on Lydian grammar, vowel shifts, and consonant patterns, that could have been lifted from the work of linguists like Roberto Gusmani or Craig Melchert, two scholars who have devoted many years to the study of Lydian. Presenting this data with limited contextual background seems out of place in a volume intended for a general reader. It is also rather misleading, giving the false impression that we know more about the Lydian language than is actually the case. Moreover, it leaves many questions unanswered that such a reader would like to know: Where does Lydian fit within the larger family of Anatolian languages? What is the relationship of Lydian to other contemporary Anatolian languages such as Carian and Lycian? What is its relationship to Phrygian and Greek, the languages spoken by Lydia's closest neighbors? Excessive emphasis on grammar and forms does not answer these questions.

The following chapter on Lydian inscriptions is more helpful, providing a useful summary of our knowledge of the language. The Lydian language is known only from inscriptions on stone and other media, a total of 119 examples, including four bilinguals, two Lydian-Aramaic and two Lydian-Greek texts. The chapter includes drawings of three Lydian inscriptions, along with transcriptions into Latin characters and a translation. These two chapters would be much better if they were combined into one and presented in reverse order.

The final chapter, on Lydian civilization, covers three separate topics: coinage, religious practices, and burial customs. While the origin of coined money remains problematical, there is clear evidence to show that the Lydians, and in particular the ruling authorities at Sardis, engaged extensively in gold refining and minting of electrum and gold objects with a standard weight and stamped symbols guaranteeing their value and authenticity. If these were not the very earliest coins, the Lydians can certainly be credited with a significant role in the creation and distribution of coinage, one that strongly influenced Greek numismatic development.

The evidence for Lydian religious practices is tantalizingly vague. Few sanctuaries from the period of Lydian kingship have been located. Lydia's best known temple, the temple of Artemis at Sardis, dates from the Hellenistic period, although remains of an earlier altar demonstrate that the cult of the deity was much older. Lydian interest in the cult of Artemis is also attested at the goddess's sanctuary at Ephesos. Lydian inscriptions furnish evidence for the cults of other deities, including Qldans (perhaps but not certainly Apollo) and Paki (perhaps Bacchus/Dionysos). Archaeological finds furnish additional information. One striking piece is a marble temple model showing an enthroned female deity with various relief scenes on its sides. This was probably dedicated to Kuvava, a Lydian form of an older Luwian deity Kubaba (not the Phrygian deity Matar Kybeliya). Another intriguing discovery is the practice of ritual meals that included young dogs.

The section on burial customs discusses the more elaborate funerary monuments, including Bin Tepe, the impressive field of burial tumuli near Sardis. The largest tumulus, believed to be the burial site of Alyattes, father of Croesus, is comparable in mass to the Great Pyramid at Giza, although the actual burial chamber has not been located. Stone tombs for Lydian elite were also impressive, often containing ornate funerary couches and painted decoration. A brief final section discusses the later impact of the Lydians on popular imagination, especially ongoing fascination with the legend of Gyges and the death of Croesus.

In conclusion, the authors' treatment of Lydia is uneven and often frustrating, as the text shifts from detailed analysis of some subjects, e.g. Greek historical sources, Lydian grammar, to superficial treatment of important topics such as Lydian art and architecture. In addition, the text has numerous typographical errors, and several references cited in the text are not included in the bibliography. The book provides some information on the accomplishments of the Lydians, but a major assessment of Lydian culture remains to be written.