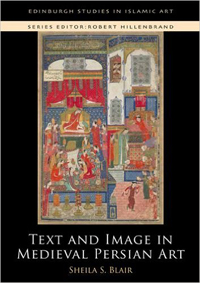 In this book, Sheila S. Blair, one of the leadings scholars in the field, highlights key features of Persian Art and Architecture through discussion and contextualization of four objects and one architectural structure. [1] Blair offers the general reader an interesting and erudite insight into Medieval Persian Art and Architecture as well as into major scholarly issues concerning the subject. She also manages to incite curiosity among experts. The reader's ability to follow the discourse is enabled by the book's reader-friendly format and pleasant flow of the text. The book attracts the non-specialist with its scholarly text and numerous colour illustrations, while, at the same time, providing professionals with further information in the footnotes, bibliography, and index. The entire book is permeated with Blair's contagious passion for her research, which is of great importance given the scarcity of young scholars dealing with the subject. This book is a welcomed piece of recent scholarly contribution to the field despite its few inconsistencies.

In chapter two, Blair discusses the splendid Freer Gallery bowl, one of the largest and finest slip painted wares of the tenth-century Islamic realm, which attracted extensive scholarly debate. [2] Blair examines numerous aspects related to the bowl: its manufacturing technique, decorative imagery and inscriptions, provenance, dating, and the significance of the object within the context of the Islamic material culture. The bowl is contextualised through its discussion of early Medieval pottery production centres in Greater Persia, different pottery production and decoration techniques, comparison of ceramic and metal wares, as well as the discussion of fundamental aspects of Arabic epigraphy. In this way, the Freer bowl stands out as one of the masterpieces of Islamic art and one of the most important pieces for the study of the History of Persian wares. Blair's method of inquiry for the discussion of the Freer bowl is an important example for the future Art Historian's methodological approach when examining objects of Islamic art. In the field, issues related to the time frame in which research can be published as well as the visibility of scholarly research not conducted in English, nevertheless, seem to have determined a discrepancy of this discourse. Blair could have not been aware of research on the Freer bowl by Jangar Ilyasov, which has been published only recently and convincingly sustains that the Freer bowl was produced in Binkath (Tashkent) and not Samarqand. [3] Blair could have however enriched her discussion of early Islamic pottery production centres (especially with information about Tashkent/Binkath) and the Doha fragmentary Bowl (Figure 2.18 on page 41 of the publication) with information from several recent publications on the subject. [4]

In the third chapter, Blair discusses a curious object, a rosewater sprinkler from Herat with the earlier employed method for the discussion of the Freer bowl. At first sight, Blair's choice seems unusual in representing twelfth-century Persian Art given the artistic and architectural flourishing under the Great Seljuk dynasty in Iran. [5] However, as it becomes clear later on, Blair's choice of the rosewater sprinkler enables her to engage in a two-fold way: first, it allows her to discuss one of the least addressed groups of Islamic metal objects and second, it gives her the possibility to engage with one of the hitherto least examined geographical areas of the Islamic realm.

The third object Blair discusses is, in reality, a monumental architectural structure: the famous mausoleum of Uljaytu at Sultaniyya, a UNESCO World Heritage site. This chapter is Blair's tour de force based on her PhD research and publications in the 1980s as she revisits her earlier discussions of this important Iranian monument. [6] The discourse begins with the re-examination of the construction and decoration campaigns of the mausoleum. It continues with a discussion of art objects as well as parts of the architectural structure, which were produced for the mausoleum by craftsmen and that are now dispersed in Western museum collections. This dispersal of Persian architectural revetment among the numerous Western collections presents one of the major challenges to the scholars of Islamic Art and Architecture. The discussion of primary sources sheds light on the monument's significance and its function. A somehow art historical analysis of the architectural setting of the Uljaytu's mausoleum is compensated for by the discussion of the Viar sanctuary. Once provoked with the new information about the Viar sanctuary, the reader could have been directed towards the relevant research in the field. New architectural models and reconstructions of Uljaytu's mausoleum and the Viar sanctuary are of great scholarly importance and could have been discussed more extensively for expert readers, or perhaps, they should be given space in a separate publication.

The next object Blair discusses is the fifteenth-century manuscript of the Khamsah of Khwaju Kermani from the British Library. The reader is again intrigued through the discussion of the manuscript with respect to its illustrations, its text and, most importantly, their interplay. Blair scrutinizes the subject and re-dates the manuscript. Some of the illustrations of this chapter are unfortunately difficult to comprehend: a larger format and better graphics would have eased the task. Blair's discussion of the significance of manuscript studies to better understand the Islamic world is of didactic importance. [7] The examination of the role of women in Persian Art in this chapter opens up another important topic for Historians of Islamic Art. Last but not least, Blair discusses the famous Victoria and Albert museum's Ardabil carpet. [8] Two parts of the discussion are of particular interest: the discussion of the arrival of the twin carpets in the West and the examination of the importance of production of exuberant objects for donation to religious sanctuaries. Blair also emphasizes the importance of discussion of the architectural context (the Ardabil shrine) for which the two carpets were produced and its relation to the function and significance of the two carpets.

The five "objects"/themes around which Blair centres her book function as matryoshka dolls: the discussion of each of the objects is contextualised through a comparison with contemporary works of art and architecture: both in time and place. By doing so, Blair manages to illustrate both the splendour of the civilizations that produced the Persian material culture as well as the exceptional quality of their production. Blair's choice of the five objects is bold and ensures the reader's attention throughout the book but also caters to different aesthetic tastes. This creative narration insures the satisfaction of readers. Blair achieves this by posing complex research questions and by referring to less known objects or structures. The reader accordingly acquires a new understanding of the five "well-known and well-published objects." Perhaps the most important merit of Blair's publication is the fact that through her discussion she is able to demonstrate the variety of methodological approaches for the research of Islamic Art and Architecture. Additionally, Blair highlights the sheer amount of information a curious researcher can extract from a single object of Islamic material culture. Blair's discussion of the relation between text and images in Islamic Art - the fil rouge of the publication - starts to address one of the most persisting issues regarding the research of Islamic Art and Architecture. Blair's publication including the reappraisal of her earlier research adds a fresh breeze to the collection of publications on Persian Art and Architecture. Continuous cross-referencing throughout the chapters provides a high-quality overview of the subject for the general reader. The reader should nonetheless be aware of the fact that a larger number of objects and structures would have to be discussed in order to provide a concise overview of Persian material culture across numerous media and over such a long chronological period.

[1] As mentioned in the book's introduction, the project began as a series of talks delivered by Sheila S. Blair at the University of London (School of Oriental and African Studies) in 2011.

[2] For a bibliography on the bowl see, for example: Jangar Ilyasov: A Celebrated Bowl in the Freer Gallery: Nishapur, Samarqand or Tashkent?, in: Tribus. Jahrbuch des Linden-Museums (2016), no. 65, 157.

[7] The discussion is partially based on Blair's earlier publications concerning the study of the art of books, Islamic calligraphy, and inscriptions. See, for example: Sheila S. Blair: A Compendium of Chronicles: Rashid al-Din's Illustrated History of the World, London 1995.

[8] The Ardabil carpets have also been studied by Blair in the past. See: Sheila S. Blair: The Ardabil Carpets in Context, in: Andrew J. Newman (ed.): Society and Culture in the Early Modern Middle East, Leiden 2003, 125-144.