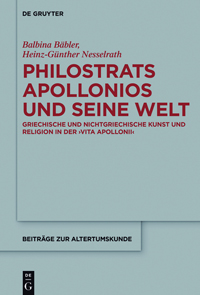 The topic of this book is very important - part of the wider attempt in the last couple of decades to rediscover the religion of the 'Second Sophistic', especially as reflected in the Vita Apollonii and the Heroicus of Philostratus. This is a significant project building beyond the old 'holy man' literatures of pre-Christian origins and reaching beyond Classics into religious studies and the transformation of the ancient world into Christianity.

The execution here is rather brief and disappointing: a short preface summarizing what is known of the author and his subject, a series of passages in Greek with translation and commentary by Nesselrath and 3 essays (also brief) by Bäbler on Apollonius in Taxila and Gadeira, on the conceptual aesthetics of 'ethos, mimesis and aletheia' in the Vita Apollonii and on questions of divinity (anthropomorphism and divine presence). The missed opportunities make an impressive list. First of all, by narrowly focusing on Vita Apollonii, Bäbler and Nesselrath entirely miss the chance to put this incredibly important text into the wider context of the literary culture around religious transformation, and especially Hellenic religion, that is an essential component of the period. This would include the Heroicus, of course, but also some key texts of Lucian (e.g. Peregrinus, Alexander and De Dea Syria), a series of works by Plutarch (especially those about oracles) and a clutch of discussions of the religious imaginaire, especially for example in the ancient novel. Second, even in the narrow focus of the discussion of the life of Apollonius, the bibliographic range of reference in this book is entirely inadequate - failing to tackle a number of significant papers (especially in the Anglophone literature) that have advanced this theme well beyond anything discussed in this book. One might include here the following works which Nesselrath and Bäbler fail to mention: G. Anderson's books (Philostratus and Sage, Saint and Sophist), F. Gascó, Habis 17 (1986); J. Francis' work in Subversive Virtue, 1995 and AJP 1998; S. Swain's very important article 'Defending Hellenism : Philostratus, "In honor of Apollonius"' in M. Edwards (et al) Apologetics in the Roman Empire, Oxford, 1999; C. Cremonesi's La Vita Pura: Apollonio di Tyana e la Sapenza, 2005: G. Sfameni Gasparro's thoughtful discussion in O. Cordovana and M. Galli (eds), Arte e memoria culturale nell' età della Seconda Sofistica, 2007; not to mention my own papers in JHS 1997 and Critical Inquiry for 2009. Third, the selection of a number of passages as somehow key within a text that is extremely long - at eight books one of the longest biographies ever produced in antiquity - without any real explanation or justification is extremely odd: it seems to imply that the authors believe the text to be something other than a complete and incremental literary argument, from which they can mine what interests them; that is a very old fashioned literary strategy.

The decision to pair a discussion about religion with a discussion about aesthetics is actually one of the more interesting gestures in what is effectively an extremely disappointing product (disappointing because it is inadequate as a proper scholarly confrontation with its subject in the moment of its production and publication). This is an interesting thought, particularly because of the semi-divine inspiration relating to the concept of phantasia, which the Vita Apolloni discusses in a rather innovative way within ancient culture. Here Bäbler builds on a pair of classic articles published in Philologus in the 1930s by E. Birmelin and B. Schweitzer, which laid out the aesthetics but did not confront the religion question. As might be expected from my comments above about book's failure to examine the necessary literature in the field of the VA and religion, it will not surprise readers to discover that the aesthetic element is also vitiated by the author's inability to cite the literature on these questions, especially from the philosophical side. One might mention (avoiding all journal articles) e.g. G. Watson, Phantasia in Classical Thought (1988); A. Manieri, L'immagine poetica nella teoria degli antichi: phantasia ed enargeia (1998); A. Shepherd, The Poetics of Phantasia (2014).

I apologize for a grumpy review: the topic is a good one and the book should have been better.