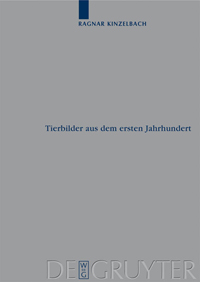 It is good to see a commentary on the Artemidorus animals. They are a remarkable group of drawings both of individual animals and fish, sketched against a hint of ground, and also scenes of two or more animals usually fighting, all with identifying inscriptions in Greek, that cover the entire back (if it is the back) of an extraordinary papyrus discovered at the end of the last millennium, now in the Egyptian Museum in Turin, and only published fully in 2008. The Artemidorus Papyrus, so called because of the identification given to the author of at least one part of the mainly new text found on the front, contains two passages from what has been thought a geographical treatise on the front. In addition, the front has one of our earliest surviving maps from antiquity (unfinished, without labels and therefore not possible to identify with any certainty) and drawings of body parts - heads, hands and feet. The date given to all this is the first century BC or AD, making the papyrus a work of late Hellenistic Egypt just at the point of the Roman take-over. The puzzles are many - the document was surely unfinished and the different elements (text, map, body-part drawings and animal drawings/vignettes) do not seem to fit together in any obvious way. So it must have gone through various stages (or 'lives', as its editors put it), such as a written geographical book (perhaps with maps) that was at some point transformed into an artist's sketchbook.

Now the drawings are one of the most important aspects of this artifact, since they are unique survivals of ancient drawing (as opposed to wall-painting or painted pottery), attesting to remarkable skills and techniques resembling the draftsmanship of known medieval and Renaissance workshops, and to the graphic preparatory work that preceded finished painting, sculpture or book-illustration. Moreover, the drawings offer the unfinished beginnings of a unique surviving map with vignettes showing elements of landscape and settlements, not all of which (in particular the little squares which the editors call piccoli quadrati) can be clearly identified or interpreted. However, apart from the discussions of Salvatore Settis and Gianfranco Adornato in the editio princeps, an article by the author of this review and two pieces on the map by Richard Talbert and Jocelyn Penny Small, the images have hardly been commented on. This is because much is uncertain - so much, indeed, that most art historians have not had the courage to take a view on the papyrus. A large school of thought (led by Luciano Canfora with a number of Italian colleagues but including such scholars as Richard Janko and Nigel Wilson as well as Small) inclines to the view that the papyrus is a nineteenth-century forgery. Others still (notably Giambattista D'Alessio and Gideon Nisbet) believe it to be genuine but restored with its papyrus strips in the wrong order. Others again, while agreeing to the genuineness of the artifact, think the view of the first editors (that it is an illustrated luxury book gone wrong) to be mistaken, and prefer to see it as a set of trainee exercises (for instance, Peter Parsons and Dirk Obbink) - the doodles of a semi-competent neophyte, rather than a fine book by a good scribe and draughtsman. The result of this storm of uncertainty is that while a number of scholars have commented on the text (since this is what has linked the papyrus to Artemidorus and has been the key item in the argument over authenticity), relatively few have had the temerity to respond to its images - not only the two sets of drawings but also the map.

So Kinzelbach's venture is most welcome. However, he is not really interested in the drawings as such, but rather in their evidence for ancient science and particularly the taxonomic classifications of animals - that wonderful world of ancient zoology and taxonomy reaching back to Aristotle. His art-historical assumption is that the images are realist in both execution and intent, and that they refer to real animals (as imagined in the period), some specifically illustrating animals sent to Augustus in 20 BC from northern India. After brief introductory matter, his book is effectively a commentary on each of the 41 animals and vignettes on the verso of P. Artemid. (as the papyrus has come to be known), attempting to tie them to known modern animals and known modern taxonomies (such as Linnaeus). He relates both the names given in the papyrus and the drawings to a large range of ancient materials and animal lore. In the end he wants the animals to be a collection of specimens.

I find his guiding assumption about how to interpret the images - which he does not argue for - to be frankly eccentric. It is not disprovable, but that is hardly evidence for its likelihood. First, there is no reason to assume that art at any period (except in very specific contexts such as illustrative drawings in the works of modern botanists) need be realist in showing direct and painstakingly naturalistic renderingings of real referents. Most ancient art - especially the art that uses the techniques of naturalism and illusionism - is idealizing, and it is perfect possibly that most of the animals in the papyrus are sketches made from the imagination which depict both real and fantastical creatures in ideal-typical ways. But behind Kinzelbach's realist assumption about the drawings lies the further assumption that the scientific aspirations (in terms of geography and paradoxography) of the text on the recto can be carried through to our interpretation of the verso, even if the animal drawings of the verso are likely to be part of an entirely different, even a later, project. That assumption is not provable, and would certainly command more credibility if Kinzelbach could show that the other disparate elements of P. Artemid. - such as the body-part images - also partake of a Hellenistic (pseudo-)scientific project. That seems pretty hard to justify to my mind. So, while the animals may indeed be a collection of specimens, I see no reason why many should not be fantastic and why they should not be items from (or for) a model book, of the kind very likely to have been employed by ancient artists in painting and mosaic when depicting different kinds of animals, as was very popular in Roman art.