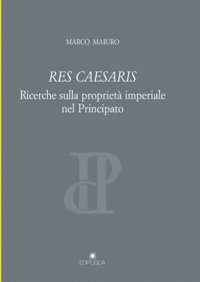 In the early imperial period, the Roman emperor controlled a vast network of properties throughout the empire, consisting primarily of farmland, but also including other types of property that provided income, such as mines and quarries. Under the administration of the imperial treasury, or Fiscus, imperial properties provided significant revenues, supplementing those gained from taxation, and helped to support the imperial court, the armies in the field, and the Roman state's food distributions in Rome. Imperial property has been the focus of a number of recent studies, which treat such subjects as the role of the state in the Roman economy and land tenure in the provinces. Scholars are now focusing on broader issues concerning imperial property, and in his important new book Marco Maiuro makes a major contribution to this debate by offering a thorough and compelling analysis of the role that imperial property played in the political economy of the empire. The purpose of the book is to establish to the extent possible the scale of imperial ownership of property and its growth over the early imperial period, and then to focus on the policy goals in Italy that the Fiscus sought to achieve with its properties. As the title of the book indicates, Maiuro's focus is on Italy, but his discussion bears on many issues connected with imperial property in the provinces. The book is divided into three main sections. In the first chapter (17-145), Maiuro discusses at length the means by which the Fiscus acquired property and the scale of its ownership in the early imperial period. The second (147-239) includes a detailed analysis of the location of imperial properties in Italy, as well as an analysis of the imperial administration's policies in administering them. The third chapter (241-346) provides a detailed repertory of all imperial properties in Italy, by region, with the sources documenting them.

To consider the scale of the Fiscus's holdings, Maiuro provides a thorough investigation of the principal sources of imperial property, estimating the frequency of confiscations and forfeitures that would result in property passing to the Fiscus. In addition, Maiuro seeks to determine how commonplace it was for members of the elite to bequeath property to the Fiscus. In his judgment, the circle of senators and other members of the elite who would bequeath property to the emperor was relatively restricted: it included, in addition to senators who were connected to the emperor by a blood relationship or by marriage, other close associates of the court, imperial freedmen, and some senators, such as Pliny the Younger, who died without heirs. In addition, on occasion, a wealthy property owner might bequeath property to the emperor and attach a condition or a request that the emperor provide a particular benefaction for the testator's community. A broader segment of the aristocracy would include the emperor in wills by providing cash legacies.

It is difficult to determine what portion of agricultural land in the Roman Empire was under the control of the emperor. To address this question, Maiuro develops a model for the distribution of landownership in the Roman Empire, modifying the previous model of Walter Scheidel and Steven Friesen (Journal of Roman Studies 99 [2009]: 61-91). Maiuro uses as a baseline for his model the wealth of veterans, arguing that their retirement bonuses and savings accumulated during their years of service would be adequate to provide a respectable living, above bare subsistence level. He then goes on to calculate the wealth of the Roman elite, including senators, equestrians, and members of town councils across the empire, in terms of multiples of this baseline of wealth. As Maiuro argues, it is likely that the distribution of wealth became increasingly stratified over the course of the early empire, with the wealthiest gaining a greater share and the non-elite classes having access to less land per capita as a result of population increase. At the same time, the accumulated holdings of the Fiscus would have grown over the same period, only to explode temporarily under the reigns of Commodus and Septimius Severus, which saw widespread confiscations of property. In Maiuro's view, the senatorial order, at a maximum, would have controlled about 2-4% percent of the empire's land at the time of Augustus, a figure that increased perhaps to 8-10% in 165 CE, when the empire's population was at its height, before the Antonine plague. The Fiscus could not have controlled more land than the senatorial order, and Maiuro offers the tentative suggestion that its holdings represented about 5% of the empire's land (143-144). This conclusion seems plausible for Italy, but it is likely that the portion of land controlled by the Fiscus in the provinces was much larger. In Egypt, for example, the Fiscus took over the administration of land that had been held by the Ptolemaic kings, while in Africa and Asia Minor, there were vast imperial estates that competed with nearby towns for the services of their tenant farmers.

Any effort to estimate the rate at which the Fiscus gained property over the course of the early principate and its overall share of the empire's wealth is bound to be conjectural, but Maiuro's calculations provide new insights into how we might think about the fundamental issue of the distribution of wealth in the Roman Empire. Moreover, Maiuro's discussion raises some important points for understanding the political economy of the empire. For one, the incentive of the imperial administration to control as much property as possible across the empire always had to be balanced against the need to preserve the resources of the empire's landowning classes, who were of fundamental importance to the empire's governance. In addition, the policy of the Fiscus to sell the bulk of the property that it received from the sources described above in all likelihood restrained significantly the stratification of wealth, as property confiscated or inherited from the wealthy could be returned to private ownership. Certainly the ability to provide property to political allies and to influence the private market for land by selling imperial properties represented an important component of the Roman emperor's power.

In Italy, the Fiscus followed a consistent long-term policy in disposing of properties that came to it and in administering them. It would sell most of the property that it acquired, and tend to keep agricultural land primarily in regions in which it already had clusters of property. This approach made it possible to keep the costs of administering imperial property under control, while at the same time sales of property gained provided the Fiscus with important source of cash income. Over the course of the first two centuries CE, imperial properties in Italy were clustered in the suburbium of Rome, in the Tiber valley, on the Tyrrhenian coast, and in northeastern Italy, including the region around Ravenna, the mouth of the Po River, and Aquileia. The accumulation of properties in the first two locations is not surprising, since they were close to Rome and a place where many members of the elite owned properties. There was also a purpose to acquisitions in these areas, since, as Maiuro argues, estates in these regions could produce wine that could service the needs of the court as well as the large market in Rome. On the Tyrrhenian coast, Maiuro shows how the Flavian emperors and Trajan build up properties with harbor facilities, such as at the imperial palace at Centumcellae north of Rome. These properties provided an outlet through which commodities produced on imperial estates could be marketed, but they also supported the importation of grain and other foodstuffs into Rome, particularly from Africa, with harbor facilities that served as safe alternatives to the major ports at Ostia and Puteoli. Maiuro links the development of imperial properties in northeastern Italy, particularly in the second century, with the growing military concern with the Danube provinces. Imperial properties in this region are likely to have played an important role in supplying the armies in the Danubian provinces with grain, wine, and olive oil.

Overall, Maiuro's book is a groundbreaking study of imperial property that offers many new insights into the economy and society of the early Roman Empire.