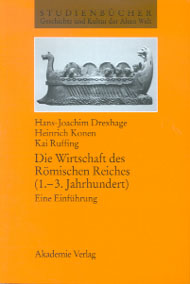 The Roman economy is increasingly a central focus of debate among historians of the Roman empire. A focal point of recent debate is to assess the performance of the Roman economy in comparison to other pre-industrial economies. Among the major issues are: 1) whether the Roman economy in the first three centuries C.E. experienced real economic growth, that is, growth that involved greater productivity of workers and higher per capita income; and 2) how wealth was distributed among the various classes comprising Roman society. One possibility is that the elite increased their own wealth simply by capturing an ever increasing share of the surplus produced by the vast majority of the Roman empire's farmers and workers.

In the present volume, Hans-Joachim Drexhage, Heinrich Konen, and Kai Ruffing contribute to this debate by presenting a very detailed and thorough introduction to the Roman economy. This book is an excellent resource, since it provides not only a clear discussion of basic issues in Roman economic history but also an extensive bibliography. In addition, the student of the Roman economy will benefit from the authors' presentation of a broad selection of the ancient evidence on the basis of which historians of the Roman economy base their arguments.

In their discussion of the Roman economy, the authors begin by considering to what extent the model proposed by M.I. Finley [1] is adequate to explain the complexities of economic relationships in the Roman empire. In Finley's view, the possibilities for economic growth were circumscribed by a number of factors, but particularly by effects of social values on economic activity. In general, the authors follow scholars, especially Harry Pleket [2] who argue for real growth in the Roman economy. But the authors recognize that the fruits of such growth were unevenly distributed, with a relatively small wealthy class enjoying financial success, and many more people barely eking out a modest existence and facing the constant threat of hunger and deprivation.

The book is roughly evenly divided between a discussion of the main areas of debate in Roman economic history, and then a second section that presents a variety of ancient sources, translated into German. The broad discussion of the Roman economy is divided into eight chapters. In the first (19-24), the authors introduce the modern debate on the Roman economy, focusing on the model proposed by Finley. The second chapter (27-57) is devoted to the role of the state in the Roman economy. The state had its most significant impact on the economy in its policy of minting coins and in its recurring expenditures, the most important of which were for the army and the imperial bureaucracy. In contrast to a very widespread view [3], the authors argue that the imperial government was concerned to promote economic productivity. This can be seen in such diverse policies as initiatives to bring unused lands under cultivation on imperial estates, or in the imperial government's policy of building roads.

Agriculture, the dominant sector of the Roman economy, is the subject of the third chapter. The salient feature of the Roman agrarian economy was the development, in many regions of the empire, of agricultural production oriented to commerce, particularly in the production of cash crops such as vines and olives. These foodstuffs fed the growing urban populations both in Italy and in the provinces. Despite the increased opportunities for commerce offered by Roman rule, many farmers operated at a subsistence level, always threatened by the possibility of crop failure, and, in the most dire circumstances, starvation (96-100).

The fourth chapter, titled 'Handwerk' (101-117) covers manufacturing, which was largely at the level of the small workshop. Here a major issues is the role of elite investment in manufacturing. Elite investment would have been necessary to develop a very substantial manufacturing sector, one that would have contributed substantially to economic growth in the empire's cities. In the authors' view, there was considerable elite investment in manufacturing; this mainly involved elite ownership and leasing out of workshops to artisans, many of whom were freedmen. The next chapter (5, pages 119-47) concerns trade, both local and interregional. In discussing the costs of transport, the authors argue that local trade, despite the high costs of overland transport, was crucially important to the Roman economy. The topic of the sixth chapter (149-60) is the 'service industry,' which was a much smaller component of the Roman economy than it is of a modern economy. This chapter includes a survey on Roman banking, as well as on the entertainment industry, prostitution, medicine, education, and the law.

In the seventh chapter (161-91), the authors attempt to assess the impact of the Roman economy and ultimately of Roman rule on standards of living. In this connection, life expectancy and nutrition were crucial to the welfare of the Roman empire's subjects, and the authors summarize recent research in these areas. Much of our knowledge of the nourishment of people in the ancient world comes from skeletal evidence, and so far the body of evidence is not large enough to permit reliable conclusions. In addition, the authors present what is known about prices and wages, and they use this as a basis to assess the relative prosperity of different sectors of Roman society. Finally, the eighth chapter (193-201) assesses the changes to the Roman economy resulting from the political crisis of the third century.

In the second section, the authors supplement their discussion of the most important areas of study in Roman economy by presenting a selection of the ancient evidence upon which the historians of the Roman economy base their conclusions. The material presented in this section includes mostly translated texts drawn from ancient literature, inscriptions, documentary papyri from Egypt, and legal literature, including constitutions (decrees) written by Roman emperors and the commentary of Roman jurists. In addition, the authors include some discussion of archaeological evidence, such as amphorae, the ceramic containers in which agricultural products such as wine and olive oil were transported. A brief discussion of the major historical issues raised accompanies each text, together with the most important bibliography on the subject.

This book is especially valuable because it seeks to present a balanced discussion of the main areas of study in the Roman economy. Each chapter is rich in bibliography, particularly in archaeological and epigraphical studies of the northern provinces. In such a study, it is difficult to provide a comprehensive bibliography, but one should include the invaluable articles of Domenico Vera [4] for the development of Italian agriculture under the principate. In addition, the authors present the results of such statistical analyses as are possible for the Roman world, for such issues as the circulation of coins, prices, and wages. The data for these analyses often come from the authors' own research. In taking their relatively optimistic view of the development of the Roman economy, the authors avoid a more general theoretical discussion of what mechanisms made substantial economic growth possible or likely. In their selection of ancient texts, the authors make excellent use of papyrological material, which is now being widely recognized as important evidence for broader issues in the Roman economy and not simply relevant for Egypt alone.

All in all, the authors are to be praised for undertaking the difficult task of presenting a very wide variety of material in a balanced fashion. They have done this with great success, "Die Wirtschaft des Römischen Reiches" represents an excellent resource that students of the Roman economy will have at their disposal. It offers both a thorough and balanced treatment of the main issues in Roman economic history, and, equally important, it provides ample resources for further study by the interested student.