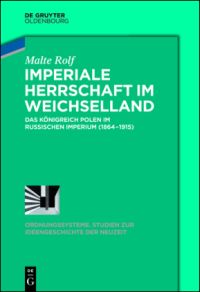 Bureaucracy in Russia and the Soviet Union does not usually entertain readers, except perhaps as theatre of the absurd. This does not diminish the salience of studies of order-obsessed, officially minded men who were the architects of projects of Empire. Published in fifteen well-researched chapters, Malte Rolf has authored such a valuable study, an analysis of contextual practices in the formation and evolution of the Russian Empire's colonial spaces and provincial bureaucracy after the January Uprising of 1863/64. Rolf concentrates on the modernity of Russian Warsaw as a periphery, a borderland, a contact zone, and a 'foreign land'. He incorporates historiography in English, German, Polish, and Russian. He has devised an outstanding bibliography and a comprehensive directory (Personenverzeichnis) of those men who ruled provincial Warsaw. He adds to and revises the new imperial approach to Western borderlands, with a hybrid situational and geospatial approach that draws on postcolonial history, political sociology, economic geography, and intelligentsia studies. He looks at how governing elites, as servants and planners of regional development for the metropole, integrated colonial space, assembled their careers, ruled over distant lands, and applied those privileges which interfering tsars and their ministers had loosely bestowed upon them.

In his source criticism, the author treats the Russian-partitioned provinces of Poland from 1863 to 1915 principally by introducing state archival documents gathered from AGAD (Central Archive of Historical Records) in Warsaw, and GARF (State Archive of the Russian Federation) and RGIA (Russian State Historical Archive) in Sankt Petersburg, together with key literature including the Varshavskii Dnevnik (1863-1912). He demonstrates impressive multilingual knowledge of scholarship on questions related to imperial rule. Rolf focuses on gubernatorial structures in 'Russian Poland' (Weichselland, Privislinskii krai, Vistula Region). The colonial modernity of Warsaw, drawing from Sebastian Conrad's work, thereby comes alive in the planned Raum (space) of settled elites, in and through the eyes of those who ruled the city after the abolition of Polish government, in so-called Polish provinces.[1] Warsaw was an extension, if not an invention, of professional bureaucrats with a tenuous project of progress, guided by an ethos of tsarist service, development, society-building, and advancement. What Rolf provides is an encyclopedic analysis of this ethos and of who these provincial elites were, right down to the name of every general-governour, viceroy, and mayor (or president), and police chief. These men built Russian Poland as a peripheral outpost after 1863/64, in and beyond the tumultuous revolutionary crisis years of 1905/06. Corruption, censorship, and violence notwithstanding, they largely succeeded in securing power for Sankt Petersburg for at least half a century.

Rolf's habilitation study of elites in the 'modern colonial' and 'new imperial' provincial, bureaucratic spaces of the Western borderlands of the Russian Empire is a generally safe topic, adding to the work of Theodore Weeks, Mikhail Dolbilov, Robert Blobaum, Stephen Corrsin, Aleksei Miller, Katya Vladimirov, Darius Staliūnas, Robert Przygrodzki, and others of the first decades of the Kritika and Ab Imperio generations. The author seems in general agreement with Weeks and Staliūnas that Russification was never a monolithic project. In addition, Rolf adds to the work of Łukasz Cimiak in Polish, with portraits of rulers in biographical and 'careerological' form. He shows us that the logic of Russian Poland, far from being static or consistent, was the sociospatial creation of governing officeholders in reaction to events. These included Fyodor Berg (Statthalter, 1863-1874), Pavel Kotzebue (Generalgouverneur, 1874-1880), Pyotr Al'bedinskii (1880-1883), Iosif Romejko-Gurko (1883-1894), Pavel Shuvalov (1894-1896), Aleksandr Imeretinskii (1896-1900), Mikhail Chertkov (1900-1905), Konstantin Maksimovich (1905), Georgii Skalon (1905-1914), Yakov Zhilinskii (1914), and Pavel Engalychev (1914-1915). Rolf sees these overlooked servants as European 'civilizers', for they embodied a personal factor topographically and had subjective mental maps for the Empire's tsarist and patriotic values of continuity. The Polish population's 'national' loyalty in Warsaw became a perennial concern not least for their 'Russian' lives and security. Many were sensitive to nationality issues and demography, a fact which well could have been due to their fragile status and mixed origins in the Empire's structures. Fyodor Berg, for instance, who governed Warsaw from 1863 to 1874, was named Friedrich Wilhelm Remberg von Berg (1793-1874).

The author further shows that the tsar's officials, being concerned with résumés and networks, tried to prevent the erosion of the territorial authority of managers, in a pan-European sense. This raises questions: Was Russia's masculinist bureaucracy colonial, or merely imperial, in its Southwestern borderlands - not just Poland, but also including Ukraine? How was it different from Soviet bureaucracy? Could private lives of these 'civilizers' be compared elsewhere? One never quite gets an analysis of bureaucracy as a philosophical problem, or of gendered space as in the work of Ann Laura Stoler, for in Rolf's view these men of Russia in Poland were mostly determined to normalize their lives and institutions at outposts. He might have made more use of the work of Susan Smith-Peter and Catherine Evtuhov on provincial Russia.[2] Or, outside of Warsaw, one might also consider the historiography of anti-imperial challenges, specifically in the Ukrainian case, beyond attempts to modernize a liberal Empire and frame positivist (and, starting in the mass politics of the 1890s, largely outmoded) Sankt Petersburg-Warsaw concerns with civil service. What made bureaucracy so 'modern' or 'colonial' in Poland is an easy matter with state documents, because Russia's 'Polish modernity' competed with other political projects. Administrative elites framed imperial dynamics and values, as Rolf shows in his excellent analysis of Georgii Skalon, the governor-general of Warsaw 1905-1914. Yet we do not get a clear answer as to whether Russia's 'statist' bureaucracy was necessary, or reactionary as a civilization, or how it compared to the erotics of violence and racial/ethnic prejudices of, say, the British, French, or German empires.

Rolf's greatest strength is his comprehensive coverage and source analysis from 1863 to 1915 of the biographies and career trajectories of administrative elites. The men he profiles built the character of Empire on the spaces it governed. Rolf soberly narrates the Kingdom of Poland in the Russian partition, going back even as far as the partition of 1772 (in the first chapter). He does not neglect hidden moments of upheaval and ethnic violence. He adds to important work in historiography and imperiology by looking at governors who, after all, were individuals with anxieties, ambivalences, and contradictions about uncertain futures. He studies values and structures built by human beings in this situational manner, zeroing in on career-builders in their networks of development, trade, censorship, and corruption. This book is an informative history of the lives and careers of the late tsarist Empire's administrators in Russian Poland, and it should be recommended to all who are experts in Russian history, Russian-Polish relations, modern European colonial history, and the new imperial and spatial history.

[2] Catherine Evtuhov: Portrait of a Russian Province: Economy, Society, and Civilization in Nineteenth-Century Nizhnii Novgorod, Pittsburgh 2011; Susan Smith-Peter: How to Write a Region: Local and Regional Historiography, in: Kritika. Explorations in Russian and Eurasian History 5 (2004), 3, 527-542.