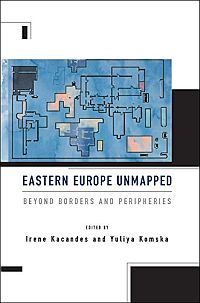 Maps are more than hegemonic - they can be emancipatory artefacts. From periphery to center, if Aesopian writers first need to master a censor's limits and a culture's tacit rules, de-canonizing and de-territorializing comparative literature scholars must start by knowing the vocabulary of official maps. An even harder objective, as the Cold War taught us, is to replant the poles, or remap the censoring geopolitical centers entirely.

Released from Kremlin media and the generational gravity of Milan Kundera's kidnapped lands of the 1980s and 1990s, Eastern Europe Unmapped is acutely aware of this dilemma and the geo-literary performances it engenders. Irene Kacandes, a veteran of interdisciplinary cultural studies and trauma writing, and Yuliya Komska, an authority on Cold War media and its cross-border uses of visual images, speak from the German margins of East European comp lit, a periphery that is really a center. They have their fingers on the contemporary pulse of trends toward "discontiguities" which overturn banal nationalisms and foster new spatial thinking. With Vitaly Chernetsky and others, they hunt for distant influences (in Argentina and South Africa) and praise a broader, more mobile, more convivial sense of alliances in Goethe's Weltliteratur, from the Czech Republic to Macedonia and Poland to Albania, into Yurii Andrukovych's postmodern Ukraine and Arjun Appadurai's globalized ethnoscapes, in lands of diasporic estrangement informed by queer theory and postcolonial and subaltern studies. Their liberal-artsy mental maps are counter-canonical: where fact and fiction meet; spatial humanities are on a digital uptick; and feminist geography and LGBTQ studies are held high (as they should be) as innovative mappings. The old discursive ghettoization from a reified East/West and trinary codes of hybrid identity that stunt agency are what is challenged in this impressive collection, by transnationally minded scholars of comparative Germanic, Slavic, Balkan, and Yiddish literatures.

The book's regional subject is one in which global openness and intensely individual, darkly creative imaginations are sacrosanct. What better legacy from the "East"? A lucid introductory overview is offered by Komska and a heterotopic conclusion by Chernetsky, building on Said, Andrukhovych, and Michel Foucault's "Of Other Spaces." Komska in her scholarly introduction notes, smartly I think, that the promises of borderlands research since the 1990s toward invoking multicultural spaces as part of "the alluring promise of diversity and hybrid post-national existence" (3) have not been met sufficiently. In the volume, ten chapters are arranged, with twelve far-flung contributors. Beyond identity and state borders, the collective seeks "a more robust narrative of Eastern Europe's discontiguous past and present ... [where] the intensities of fact and faction align" (12).

There are five separate sections, each featuring two chapters. Topical pairings fall under religion in the neomedievalism of the Yiddish writer Yudl Mark, in parallel to the periodization of Muslim subjectivities in the Balkans; dislodged dissent, as in recent Belarusian local/global intellectual dynamics, with a "distant reading" of Jerzy Giedroyc and the Polish émigré journal Kultura; fictional cartographies and temporalities, given Bohumil Hrabal's philosophy of history and the geopoetics of Miroslav Penkov and Aleksandar Hemon; appropriated afterlives, on Bruno Schultz's murals and the Jewish synagogues of Poznań and Olsztyn; and elective affinities, covering Ann Cvetkovich's post-traumatic Balkan travels and Kacandes's personal account of her friendship with Irena Grudzińska in Poland. Inspired by the "wild mash-up" (14) of Andrukhovych's geopoetics for Ukraine's maps of peace and war, the book itself seems like a mash-up at times. It is marketed by Berghahn jointly as literature and history, but more actual history (even a basic timeline or glossary of names) would have been useful. The contemporary aesthetic mash-up is likely unavoidable given the editorial challenge, but there's still a distinction between bricolage and an unsculpted mess.

Despite the interesting chapters, one is hard-pressed to find a method. If there is a binding theme, it's the challenge to the trope of betweenness in favor of distant reading (Franco Moretti): space over place, agency over geopolitics, new fiction over East European localities. Some seek out the humor, by turns gentle and prickly, of Schulz, Hrabal, Dubravka Ugrešić, and Serhij Zhadan. Formal approaches to textual exegesis include a fine essay on the Czech anecdotal tradition by Daniel Pratt, and thought-provoking, methodologically sophisticated chapters by Jessie Labov (on diasporic distant reading, with original maps), Ioana Luca (transnational Marxism), and Adam Zachary Newton (the migration of forms), which mark the innovative heart of the book.

The volume's big achievement is its "unmapped" thesis. This is perhaps more polemical than the editors envisioned, but the rise of neofascism coupled with pop-geopolitical instrumentalization of identity discourse by the Russo-American global right makes this as relevant as it was in Yugoslavia in the 1990s. Maps of (dis)placement ought to lead observers away from civilizational talk. Too often, they do not - we need more explanations for why not. In the meantime, craft practitioners of East European so-called minor literatures are not reducible to hyphenated difference, nor generally want to be marketed as such. Creative output and literary friendships by choice of writerly language cannot only be called "between X and Y" - this is a valid non-aligned (and now very Ukrainian) point. German and East European language/comp lit specialists and adventurous interdisciplinarians will find a lot that is useful in Eastern Europe Unmapped, a smart and eclectic analysis of human geographical landscapes.