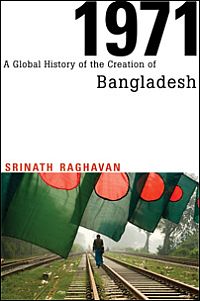 There are but two occasions when developments in South Asia influenced the global Cold War. The Sino-Indian Border War in late 1962 deepened the Sino-Soviet split und led to the establishment of two lasting alliances - the Indo-Soviet friendship and the Sino-Pakistani axis. In comparison with the mostly forgotten border war, "1971" ranks high in historical memory because the crisis in East Pakistan and the emergence of Bangladesh appear to be closely linked with the American opening towards the People's Republic of China. The Nixon administration supported West Pakistan's elites even when the army committed a genocide in East Pakistan driving ten millions refugees into instable north-eastern India. Washington believed that its own major foreign policy reorientation could be accomplished only with the help of Pakistan's military regime under General Muhammad Yahya Khan, both in terms of establishing secret contacts and arranging Henry Kissinger's famous secret visit to Beijing.

In another exemplary researched monograph, Srinath Raghavan, Senior Fellow at the Centre for Policy Research, New Delhi, earlier also Senior Researcher at King's College, London, for the first time has drawn a truly broad picture of the events which led to the creation of Bangladesh. Whereas earlier publications around the international context mostly focused on the great powers involved, namely the United States, the Soviet Union and China, Raghavan has investigated attitudes and moves of others as well. Views and actions of West European countries, particularly France and the United Kingdom, India's alleged friends in the Non-Aligned Movement or Australia help to understand how fragile power-groupings had become by the early 1970s. Washington's European allies for example were far from supporting the American "tilt" towards Pakistan, among others because they came under massive pressure from public opinion at home. The chapter about the impact of campaigns in the Western world pursued by South Indian diaspora groups, NGOs and artists certainly counts among the most relevant additions to the history of "1971".

Raghavan makes a point that the usual deterministic approach in the historiography of the crisis has led to false conclusions. Notwithstanding the victorious war, there was no Indian masterplan to use Pakistan's domestic crisis to break up the archenemy. Like most of the other governments involved, New Delhi was observant, hesitant and indecisive through most parts of the nine months of crisis. In his conclusion, the author even claims that an early military intervention in spring 1971 would not only have saved many lives in East Pakistan, but would have enhanced the chances of creating some more stability in later Bangladesh without isolating India more than it happened to be after the end of the "blitzkrieg" in December.

By drawing long lines, Raghavan has placed the actions of key decision-makers in a proper context. This takes care for assessments more balanced than usual, even of the well-known role of Nixon and Kissinger. They misread a strictly regional crisis as litmus test for the prospects of their global schemes. Willing to take the risk of a third world war, they in vain tried to convince China to intervene militarily. Most relevant is the new narrative of the role of Sheikh Mujibur Rahman, who became the protagonist of the East Bengal's wish for autonomy and later independence by using the (students') unrest from 1968 affecting Pakistan as much as large parts of the Western world. By the time he and his Awami League had achieved a landslide victory at the general elections, he had become the prisoner of extreme demands and could no more afford a compromise with the military leadership and West Pakistan's Zulfikar Ali Bhutto. Particularly for South Asian debates, the recalibration of responsibility for the outbreak of the crisis among the Machiavellian Bhutto, the irresponsible alcoholic Yahya and the populist Mujib is of great value. Apart from giving the global context of "1971", Raghavan in the conclusion has placed the events in what is now Bangladesh in a modern context. The current basic debates in international affairs today are national sovereignty versus human rights, interests versus norms, or unilateralism versus multilateralism. From this perspective, the events in South Asia are no isolated and partly misunderstood regional phenomenon, but the precursor of current attempts to reshape the global landscape.

Nevertheless, two of Raghavan's assessments are hard to follow. He argues that there was neither any automatism in U.S.-Pakistani agreements nor binding assurances that Washington had to intervene in case of an Indian attack. An aide-memoire, handed over to President Mohammad Ayub Khan in late October 1962, however, clearly states that the United States "will come to Pakistan's assistance in the event of aggression from India against Pakistan". [1] Moreover, as Denis Kux has shown, there was no lack of verbal assurances of that kind, too. [2] As Raghavan himself elaborates in detail, Indian forces, hardly camouflaged, already in November had de facto opened interstate hostilities, operating deep within East Pakistani territory. Although it was Pakistan openly going to war by attacking Indian airfields in the Punjab on 3 December, there were good reasons to blame India as the real aggressor. The second point in debate is whether it had any impact on the war when Bhutto left a meeting of the United Nations Security Council on 15 December 1971, wherefore a resolution calling for an immediate ceasefire did not pass. Less than 24 hours later Pakistani forces capitulated, and it appears unthinkable that India, already negotiating the terms of surrender, would have been halted by any resolution.

All in all, Raghavan after "War and Peace in modern India" [3] has written another definitive book on post-partition South Asia. It is not only based on research in archives over three continents, but rich in details and providing new insights in decision-making processes. On top of that, the author's style is applaudably elegant, another reason why it is strongly recommended not only for specialists, but a broader public.