Eric Leland Saak: Catechesis in the Later Middle Ages I 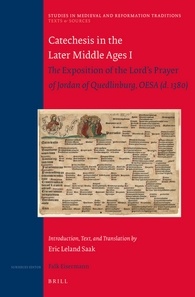 In 1327 and at the request of his students in Erfurt, Jordan of Quedlinburg offered ten lectures on the Lord's Prayer that were intended to provide academic as well as catechetical instruction both to scholars and to the laity alike. Eric Saak has offered here, for the first time, what he calls a "study edition" (51) of these lectures along with Jordan's Exposition of the Tree of the Virtues and Vices. Included in the volume is the Latin edited text and facing-page English translation. He based his edition and translation on eight of 54 surviving manuscripts, the earliest of which date to the mid-fourteenth century. Included with the edition is an important critical apparatus for the text and extensive notes that connect Jordan's work to patristic and medieval authors as well as later authors such as Gabriel Biel and Rudolph of Saxony. This volume is the first of an intended six volumes on late medieval catechesis - an impressive undertaking indeed.

In the introduction, Saak offers important background information on this little studied fourteenth-century Augustinian friar and scholar and suggests that the lacuna of modern research (Saak's own work notwithstanding) relates in part to much-needed manuscript work, of which the present edition and larger project is intended to help correct. He also, rightly I think, points to the fact that much modern scholarship on late medieval religion is overly concerned with fifteenth-century precursors to the Reformation and often ignores the great contributions of fourteenth century "unoriginal" (6) works that greatly influenced later theological and religious thought.

Along with his introduction of Jordan and his works, Saak includes a section on late medieval catechetical work and an introduction to the importance of the Lord's Prayer as a catechetical tool. Of particular interest here is his section on what he calls "religionization" (20) - the process whereby an earlier christianized Europe moves towards a greater understanding of what it means to be religious. Coupled with confessionalization in the sixteenth century, "religionization", he suggests, was a maturing process that went beyond the basic liturgical or sacramental meaning of being Christian. Saak argues that the Lord's Prayer, and particularly sermons on the Lord's Prayer, becomes a central vehicle, as one might expect, for the formation of this "religionization" process in the Late Middle Ages. He tentatively suggests a five-fold typology for late-medieval treatments of the Lord's Prayer that include liturgical, religious, catechetical, pastoral and academic categories. Saak notes, rightly, the fluidity of these categories and Jordan's work is a case in point, covering many of the five categories listed.

The text itself begins, in traditional fashion, with an introduction (lectures 1 and 2), followed by seven petitions (lectures 3 through 9) and then the final Amen (lecture 10). Very quickly in this work, one gets the sense of how central this prayer was to late medieval religious life, in particular because it was a communal prayer. There is a traditional connection to the number seven: seven petitions, seven vices and virtues and the seven gifts of the Holy Spirit that permeate Jordan's lectures. Lecture seven includes an extended examination on the meaning of "daily bread" that had both theological implications in terms of the Eucharist and also its meaning in daily life (avoidance of gluttony, food in moderation and the like). This particular lecture illustrates well how this prayer and Jordan's commentary on it provided insight and meaning for the learned as well as the laity.

The final section is Jordan's Exposition of the Tree of the Virtues and Vices in which he illustrates, using the image of a tree, how the Lord's Prayer eliminates vices and introduces virtues. It is here that Jordan indicates his audience as including "even the unlearned and simple" showing the importance of this prayer as a catechetical tool (191).

With this edition and translation, Saak offers modern students and scholars an important contribution to late medieval religion and particularly the Augustinian influence on the fifteenth century and beyond. The volume is a welcome addition for students and scholars of late medieval religion and we can only hope for the quick publication of subsequent volumes in this project.